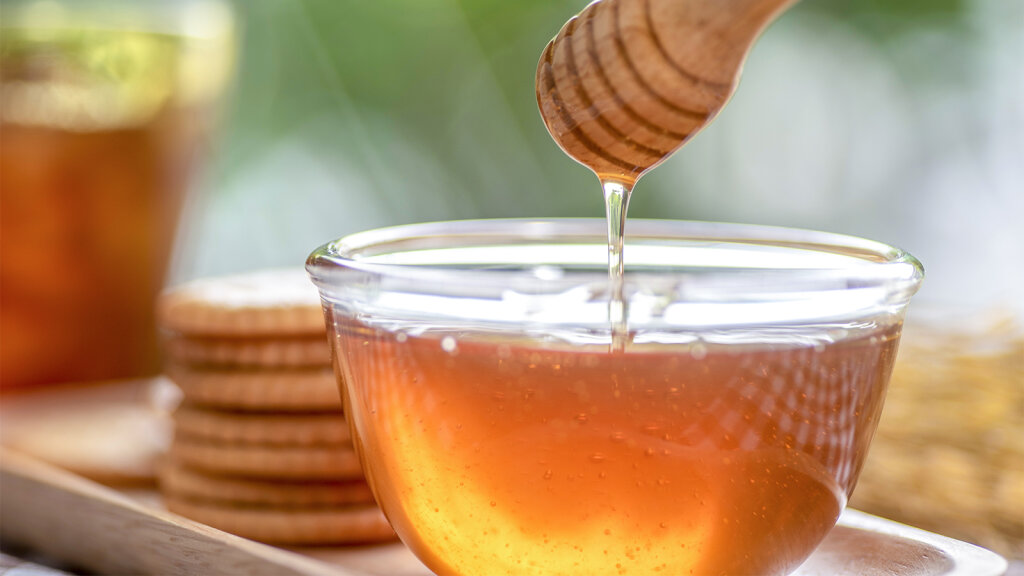 Honey’s great for a lot of things: sweetening tea, making baklava sticky, feeding a hungry bear. Yes, humanity has had a love affair with honey and bee-related products since time immemorial: Honey was sacred to the ancient Egyptians; the ancient Chinese made a fermented drink with it as early as 9,000 years ago; and the ancient Greeks and Romans used it as medicine to treat everything from stomach aches to flesh wounds.

Honey is complex stuff: It’s made up of almost 200 compounds, including water, sugars, proteins, loads of enzymes, amino acids, vitamins, minerals and various plant compounds. And the ancient people were right to rub it on everything — modern science has proven it’s pretty miraculous. Here are some applications for honey that might just save you some money — or a run to the pharmacy:

Because of its chemistry and viscosity, honey is a great topical antibiotic, maintaining a moist environment to keep a wound healing itself and providing a barrier to outside infection. Honey also is naturally acidic (most bacteria and other pathogens that would like to eat you hate living in an an acidic environment), containing the enzyme glucose-oxidase, which breaks down glucose into hydrogen peroxide. The bees do this because it keeps the honey from spoiling — a small amount of hydrogen peroxide is always forming in the sugar crystals, ensuring that life for a bacterium will be extremely difficult there. Other types of honey, like manuka honey from New Zealand, also contain a compound called methylglyoxal (MGO), which has powerful antimicrobial properties.

Honey has been proven to be effective against e coli, salmonella and even antibiotic-resistant staph.

At some point in your life, it’s likely someone has suggested you ingest honey in some form or other — tea, with whiskey, lemon or just straight off the spoon — in order to ease a hacking cough. A literature review of studies published in August 2020 in the journal BMJ Evidence Based Medicine found that honey might be more effective for treating the symptoms of upper respiratory illness, coughs and sore throats than antibiotics and other treatments.

A 2010 study published by the National Institutes of Health even linked the use of honey as a cough treatment in children to better sleep, compared with other over-the-counter cough medicines.

3. It Can Help Sustain You Through a Workout

Honey is made up of about 80 percent carbohydrate (mainly glucose and fructose), and it has a low glycemic index compared with other sweeteners. We need carbohydrates when we exercise to keep our muscles going and to perform at our best, and a low glycemic index ensures that the carbs are metabolized more slowly and cause a more gradual rise and fall in blood glucose than, say, a pack of Starburst.

Studies have not shown that honey is superior to other carbohydrates one might reach for to boost endurance and performance during exercise, but there is evidence that it might help boost immunity that might be disrupted as a result of exercise, as well as improve markers of bone formation.

4. It Soothes and Heals Burns

The U.S. Centers for Disease Control and Prevention is pretty clear about what to do when you sustain a mild burn: Immerse the burn in cold water and, for the love of god, don’t put butter on it. But we love putting something on a burn! And honey’s antibacterial and anti-inflammatory properties seem to make it the only topical burn remedy that can really work magic on inflamed skin.

Still, moderately severe burns should probably just be treated with cool water and a sterile gauze covering, but if you give yourself a little seering with the iron, try honey!

If you somehow ran afoul of a tapeworm or giardia or some other intestinal parasite, you’re probably going to need something a little stronger than honey to clear it. However, on your path to wellness, a 2007 study in the Journal of Medicinal Food suggests that a mixture of honey and papaya seeds helped in clearing poop samples of parasites in three quarters of participants.

Sports Today – How college football is handling its COVID-19 protocols one month into...

Sports Today – Is Nebraska football too far gone, even for Scott Frost?