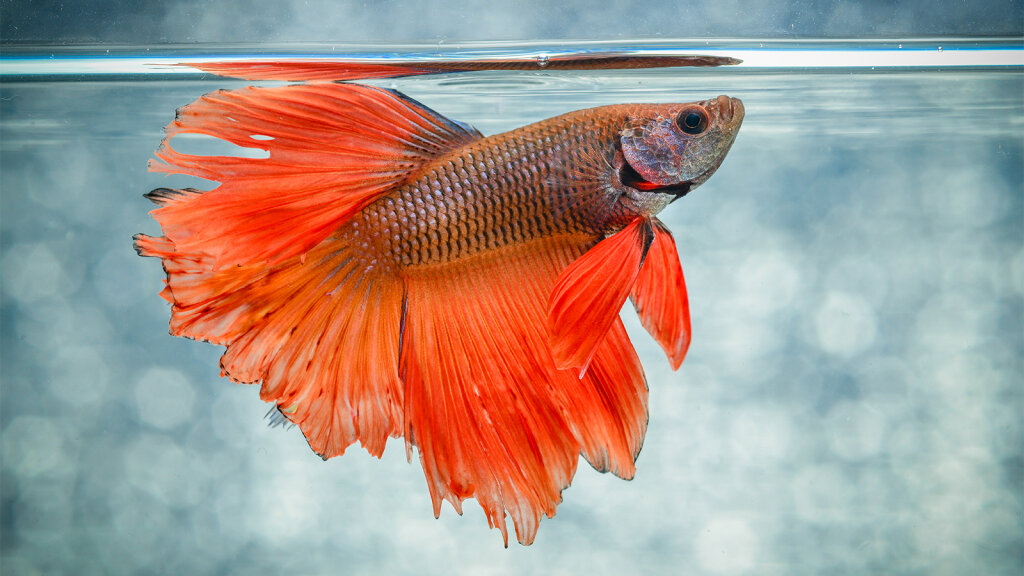 With its striking, bold colors and flashy fins, the betta fish is one of the more popular types of fish found in home aquariums. Unfortunately, myths abound about these intriguing creatures. One myth is that you just buy one, stick it in a bowl, feed it every day and that’s it. But the truth is that they’re not as hardy and easy to care for as many believe.

Betta fish — also called Siamese fighting fish — are tropical fish native to Southeast Asia. Especially prevalent in Thailand, wild bettas typically live in rice paddies and other shallow, stagnant bodies of water. Because these wetlands routinely shrink during the dry season, bettas hop from puddle to puddle, trying to find a reasonably deep pool where they can hang out until the rains return. Due to these conditions, bettas developed a labyrinth organ that gives them the ability to obtain some oxygen from the air as well as the water.

Bettas got the nickname “Siamese fighting fish” due to their territorial nature and inclination to fight. In 19th-century Thailand, the fish were bred for this purpose, and many fighting matches were held. Interestingly, the fish fights only lasted a few minutes before one of the two would either die or give up and retreat. Bettas were first introduced to the U.S. in the early 20th century.

While wild bettas generally have small fins and are dull green or brown, today’s pet bettas have been bred to be quite colorful, with elaborate fins. With proper care, a pet betta can live for two to four years. But before you buy one, make sure you’re aware of these five common fish tales about the beautiful betta fish.

Perhaps the most popular myth is that bettas can live in small bowls. The opposite is true: Betta fish need a tank that’s at least 2.5 gallons (9.4 liters), and 5 gallons (19 liters) is better. The origin behind this persistent myth is uncertain, but may come from the fact that bettas are often sold in small containers, and because they have some ability to breathe out of the water.

But bettas can be stressed if they’re housed in close quarters, especially if they share space with fish perceived as rivals — for small tanks mean there’s nowhere to hide. Even when housed with fish they get along with, they still need places to escape when they don’t feel like socializing.

But while the tank should be spacious, it shouldn’t be too deep, as bettas swim back and forth, not up and down.

Matt Leighton, a longtime betta fish owner and editor of VivoFish, says bettas should be kept in tanks no deeper than 12 inches (30 centimeters).

“If it’s too deep, the betta may not be able to get up to the surface as easily,” he says in an email interview, noting their fins aren’t that powerful. “It’s heartbreaking to see a betta struggling to climb, and then be pulled down to the bottom by his tail.”

Betta fish are tropical fish that need to be kept in water ranging from 76 to 81 degrees F (24 to 27 degrees C). Unless you keep your home this warm — and most people don’t — you’ll need that heater.

A water filter is important, too, even though wild bettas live in murky puddles. Without a filter, waste materials (urine and feces) and uneaten food can make the water toxic. Be sure to purchase a filter with a gentle flow, as bettas’ delicate fins do better in calm water. In addition, their fins could be damaged by the suction in higher-flow filters.

It’s true bettas don’t mind being alone. It’s also true they tend to have issues with other fish. If male bettas are together, or placed with other fish with bright colors and large fins, their natural territorialism often prompts them to fight. However, they can definitely live with other aquatic creatures, such as ghost shrimp, snails and African dwarf frogs. They can also live with other species of fish, namely bottom-dwellers such as the eel-like khuli loach or those with small fins.

Female bettas can often live together harmoniously with adequate space, which means a tank in the 10-gallon (38-liter) range. But monitor them. Jessica Kirk, a veterinarian and head of Vet Explains Pets, says by email that female bettas can sometimes become aggressive with other females — or any other fish. So if you’ve got a female or two and want to introduce new fish, do so one at a time.

“Then closely monitor the aquarium’s pecking order to make sure that everyone is getting along after the initial meeting,” Kirk says. If one of the ladies becomes aggressive, she needs to be moved to another tank.

4. Bettas Can Survive on Plant Roots

While betta fish are often sold in small vases with a plant, bettas are carnivores, not herbivores. In the wild, they chow down on insects and larva. So feed your pets fish pellets or flakes crafted specifically for bettas. You can supplement with high-protein treats such as bloodworms and brine shrimp. But remember that fish can become overweight just like any other pet. So feed in moderation, ideally only as much food as the fish can eat within three to five minutes.

Experts agree the laziness myth stems from two main factors. First, many people observe bettas in pet stores, where they’re often kept in small containers that hinder their activity. And second, many owners erroneously keep their betta fish in unheated water, which makes them lethargic.

Leighton says betta fish can be playful and active in the proper setting. “I’ve seen them push moss balls around, ‘dance’ around their tank, display their tails and generally be quite active,” he says.

Now that you’re armed with the proper facts, it’s time to go betta-shopping.

Sports Today – ‘The family reunion has been canceled’: Absence of College World Series...

Sports Today – Premier League’s big decision amid coronavirus: Will they have a summer...