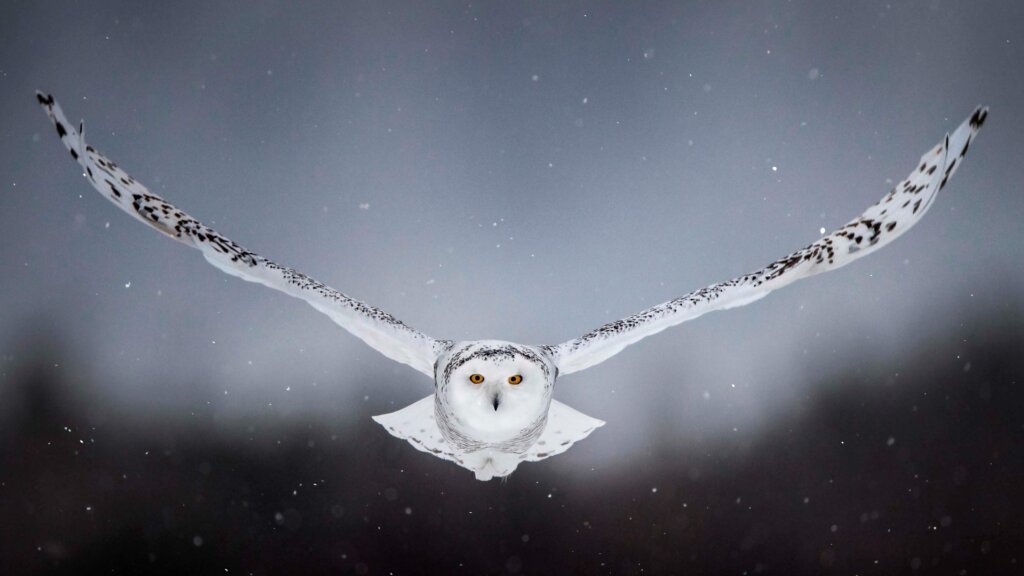 When someone has been studying a certain animal up-close and personal for more than two decades, you know that person is going to get the inside scoop on that creature. Such is the case with Denver Holt, founder of the Montana-based Owl Research Institute, who began researching snowy owls in the village of Barrow, Alaska, along the coast of the Arctic Ocean, in 1992 as part of the nonprofit organization’s Snowy Owl Breeding Ecology and Lemming Population Study.

While the group’s initial research focused on the predator-prey relationship between the snowy owl and brown lemming — the owl’s primary food source — Holt and his crew have since learned much more about this regal and charismatic bird, also known as the snow owl, great white owl from the North and white owl. Interestingly enough, of the 250 species of owls in the world, the snowy owl (Bubo scandiaca) has arguably proved to be the most captivating, with the ORI’s work with this particular animal always generating the most attention, questions and admiration.

“Owls, in general, are one of the most popular and most recognized groups of birds in the world,” says Holt. “But for reasons I’m not even sure of, when you take a white snowy owl out in front of everyone, people just say ‘ah.’ That goes for white Arctic animals, in general. I don’t know what it is, perhaps some angelic quality or purity, but people kind of get excited when they see the white snowy owl.”

Here are six tidbits about this fascinating bird of prey.

1. They Take Part in Dramatic Invasions Known as “Irruptions”

Lovers of the majestic snowy owl can hit the avian lottery if they’re lucky enough to witness what’s known as an irruption; a periodic phenomenon when hordes of mostly young snowy owls 4-6 months old migrate south from their northern breeding grounds in the Arctic tundra to Canada and the Northern U.S., from as far as Seattle to Boston. When one of these sporadic irruptions occurs, people will flock by the hundreds of thousands to go view these birds in their first year of life, according to Holt. “People who don’t have any interest in owls even head out to look at them,” he says, “often traveling across state boundaries.”

2. They’re Not All Solid White

The snowy owls are one of the only owls in the world that display distinct color differences between the male and female. When they’re young, they both look like females, which retain brown bars and spots on their white face and plumage throughout their lives, according to Holt. “As the owls age, the females retain most of their darkness, and some males lose their markings almost completely and become a bright fluorescent white. It takes three years for males to become almost pure white.” Like the females, however, some male snowy owls never lose their dark bars and spots. “We think that has to do with special selection,” says Holt. “Young males that kind of resemble females do not breed; only older males who become bright white at 3 to 4 years old maintain territories and breed.”

3: The Females Are Larger Than the Males

“When lemmings are high, snowy owls have a good year,” says Holt, who reports that snowy owls in his study range have killed and eaten a total of 45,000 to 50,000 lemmings through the years. “When lemmings are low, they have a bad year, and might refrain from breeding or have a smaller number of chicks.” When lemmings are scarce, he adds, they’ll switch over to wild birds and shore birds, such as ducks or gulls.

5. Lemmings Play a Part in the Bird’s Fascinating Courtship and Mating Ritual

“We think the owls migrate back north to find areas where lemmings are abundant, and then they settle to breed,” says Holt. “Once that all starts, males try to entice females to their territories. Only adult white males get to breed, and only if they have a lot of lemmings to offer females; it’s all about who’s got the resources. Males catch the lemmings, and do an elaborate courtship flight with the lemmings in their bills (flying in an exaggerated undulating pattern, up and down like waves). They land and raise their wings up, turn around and show off their highly reflective fluorescent plumage as if to say, ‘Look at me, I’m a handsome male and it’s better breeding with me than someone who doesn’t even have a house!’ You gotta interpret it that way. If he has a good territory and a lot of lemmings, he’ll have the opportunity to breed.”

6. Snowy Owl Eggs Hatch in the Order They Were Laid

When snowy owls return to their Arctic coastal breeding grounds to look for a mate in late April or May, the tundra is still frozen and often snow-covered. “They use their body heat, feet and bills to dig out a bowl about 10 inches (25 centimeters) wide and 3 to 4 inches (8 to 10 centimeters) deep on a high mound or ridge, so the female can lay her eggs,” says Holt. “The female will have some 10 to 12 eggs in good lemming years, with the average at around five eggs. After about 32 to 35 days, the eggs will hatch one at a time in the order in which they were laid (or asynchronously, which means you’ll have chicks in the nest ranging anywhere from 2 to 10 days old). Only the female incubates the eggs, and the male brings in food and protects her from foxes, polar bears or other predators.”

Sports Today – When will the NBA return? Latest updates and big questions