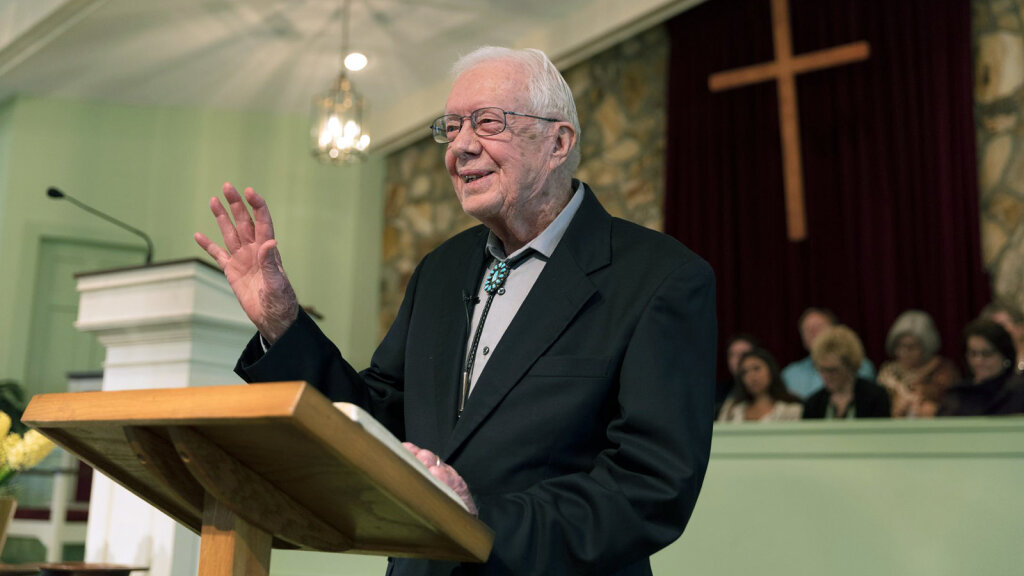 To be the president of the United States might seem like the ultimate achievement — a chance to make a mark domestically and on the global stage. But for the 39th American to hold this title, the presidency was only the beginning of his lifelong effort to make the world a better place.

We’re talking, of course, about President Jimmy Carter. After spending four years in the White House from 1977 to 1981, Carter has spent the decades since working to spread peace and democracy, and fighting disease throughout the world.

Born James Earl Carter Jr. in rural Georgia to a peanut farmer and businessman father and a mother who was a registered nurse, the future president and humanitarian grew up in a religious family. Carter attended public school in Plains followed by university study at two Georgia colleges before receiving a B.S. from the United States Naval Academy in 1946. The same year, he married Rosalynn Smith, whom he had known since the day after she was born.

During his time with the Navy, Carter served the Atlantic and Pacific fleets as a submariner. He achieved the rank of lieutenant, was assigned to the nuclear submarine program, and did graduate work in reactor technology and nuclear physics.

Upon the death of his father in 1953, Carter returned to Georgia to run the family farm and its supply company. Back in Plains, he became active in local political life, earning a seat in the Georgia Senate by 1962, running for governor and losing in 1966, then winning in 1970, before announcing his candidacy for president in 1974.

As governor of Georgia, Carter was a progressive and a reformer, according to Robert A. Strong, professor of politics at Washington and Lee University. He called for an end to segregation in his inaugural address and increased the number of African Americans on the state government staff. He worked to improve the state’s “wasteful government bureaucracy,” was pro-environment and wanted more funding for schools.

Carter entered the White House Jan. 20, 1977, after defeating President Gerald Ford with campaign slogans “A Leader, For a Change,” as well as “Not Just Peanuts,” inheriting a country facing challenges of inflation and unemployment.

After four years, the Carter administration could claim “an increase of nearly 8 million jobs and a decrease in the budget deficit … Unfortunately, inflation and interest rates were at near record highs, and efforts to reduce them caused a recession,” according to the White House website.

Nevertheless, during his presidency, Carter helped restore “American faith in U.S. government that had been eroded during the Nixon and Ford years,” says Sarah B. Snyder, associate professor at the School of International Service at American University and historian of U.S.-foreign relations. “American people came to trust him and by extension came to regain their trust in the U.S. government.”

Carter talked more openly than most about his faith and how it affected his worldview and policies, Snyder explains. The focus was on personal morality and the way the United States conducted policies. “It was something he was very comfortable talking about, and he linked his own faith to, for example, his support for human rights.”

His foreign policy was driven by a commitment to human rights, which he stated in his inaugural address had to be absolute, Snyder explains in her article “Human Rights and U.S. Foreign Relations: A Historiographical Review,” although some scholars have argued that his attentions were unequally distributed.

Some of Carter’s important foreign policy achievements included the signing of the Panama Canal treaties, which removed a significant irritant in U.S. relations with Latin America. Carter is also known for the Camp David Accords, in which he helped to negotiate a peace between Israel and Egypt. The Carter Center website notes his additional foreign policy accomplishments as the signing of the Strategic Arms Limitations Talks II treaty (SALT II) with the Soviet Union — although it never went into effect — and establishment of U.S. diplomatic relations with the People’s Republic of China.

Despite his recognized skill at diplomacy, the final year and a half of Carter’s presidency was plagued by the Iran hostage crisis. After the deposed Shah Mohammed Reza Pahlavi was admitted into the United States for medical treatment, students in Tehran stormed the U.S. embassy Nov. 4, 1979, taking hostages and demanding the Shah’s extradition.

The release of the final 53 Americans held was finally negotiated on the last day of Carter’s term. The situation with the hostages was significant, but part of the reason it became a political liability was that it reinforced a narrative of Carter being possibly weak or indecisive, Snyder says.

Thus, despite gains in trust and jobs, Carter failed to win a second presidential term, and was beaten by Ronald Reagan in a landslide victory. Reagan took 489 electoral votes to Carter’s 49. One of five incumbent presidents to fail to be re-elected, Carter left Washington D.C. in 1981 poised to begin the journey of his humanitarian work.

Carter is someone who has shown that your legacy as a person and as a public figure are not only limited to years spent in the White House, explains Snyder.

Like many presidents before him, after leaving the Oval Office, Carter established a presidential library, which opened in 1986, along with the adjoining Carter Center that he founded four years earlier with his wife Rosalynn. A partnership with Emory University, The Carter Center holds “a fundamental commitment to human rights and the alleviation of human suffering” and “seeks to prevent and resolve conflicts, enhance freedom and democracy, and improve health,” according to its mission statement.

“When they left the White House, they weren’t ready to retire,” says Deanna Congileo, who has served as director of communications for The Carter Center and President and Mrs. Carter’s press secretary since 1991. “They were looking for some way to use the influence they had … and continue working on the issues that were important to them.” Since the early 1980s, The Carter Center has operated in 80 nations around the world and been a pioneer on many fronts.

One well-known effort is the campaign to eradicate guinea worm disease. The work has been a huge success and so far the organization and its partners has reduced guinea worm cases from 3.5 million worldwide in 1986 to fewer than 100 today.

The Carter Center is also recognized for its work in international election observation. To date, The Carter Center has observed more than 100 elections in countries abroad, working to share knowledge of democratic processes and standards, not to impose them, Congileo explains.

“We’re known as neutral and trustworthy,” she says. “I think we’re known as an organization with strong core values that are reflected in our work — what we choose to work on but also how we work with partners and people in the field.”

Since 1984, President Carter has also been known for his involvement with Habitat for Humanity International. “That’s when most of the world found out about Habitat,” says Jonathan Reckford, CEO of the nonprofit, which had been founded in 1976 by Millard and Linda Fuller. The image of a former U.S. president personally doing construction work changed the way people thought about a post-presidency.

“We can now see their legacy,” Reckford says of the Carters, who have been involved with Habitat every year since. “It’s hard to overstate how much impact they’ve had.”

In 2002, Carter was awarded the Nobel Peace Prize for his extraordinary humanitarian work. According to the Nobel Prize website, the award was given in recognition of his “undertaking peace negotiations, campaigning for human rights, and working for social welfare.”

Still a true man of faith, Carter continues to teach Sunday school at Maranatha Baptist Church in Plains where he has since he left the White House in 1981.

“It is all about service,” says Reckford, who has been with Carter in situations with the most powerful people in the world and with the least powerful and found him to be the same person in all of them. “He really has lived his faith in such a consistent way.”

Hacked! – Xbox One Controller Not Working? 4 Tips on How to Fix It!