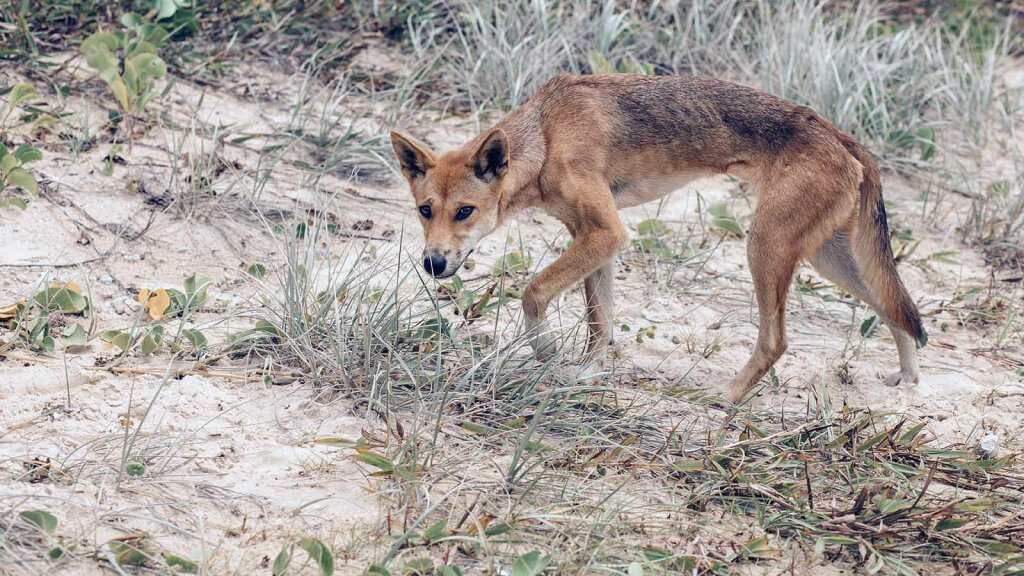 It’s been said over and over, by all kinds of people and always in a bad Australian accent, “The dingo ate my baby.” Boom. Drop mic.

You, too, may have said it and laughed hardily with your sicko friends. Yet, chances are good that none of you know the real story behind this not-so-funny statement. I mean, please describe any situation in which anything eating a baby tickles the old funny bone.

And while we’re on the topic, let’s talk about dingoes and whether they’re dangerous — and how they ever got near a baby in the first place.

What Is a Dingo?

Dingoes (Canus lupus dingo) are Australia’s native wild dog that came to the outback from Southern Asia about 3,000 to 4,000 years ago. They are similar to feral dogs in the U.S., minus the catchy name. The average male dingo is lean, weighs between 22 and 44 pounds (11.8 and 19.4 kilograms), and has a goldish, orangish and reddish coat and pointy ears. Females are slightly smaller and weigh in at between 21 and 35 pounds (9.6 and 16 kilograms).

Dingoes usually travel in packs, although there are some that travel alone. A pack is led by a dominant dingo couple, and that pair will typically mate for life, as well as breed in the dingo group. The canines breed once a year and there are about five pups in a litter.

When the dominant couple breeds, the sweet female (note sarcasm), kills the offspring of her packmates. Afterward, the other way-too-forgiving females help care for the dominant female’s pups, since they are the only pups still alive. (Gasp!) Dingoes that aren’t sacrificed as pups have a lifespan of around seven or eight years in the wild and up to 15 in captivity.

Dingoes are opportunistic hunters and scavengers. They eat rabbits, rodents, birds, lizards, foliage, nuts and yes, babies (too soon?). Like wolves, they’re extremely smart — much smarter than domestic dogs (except yours, of course). They’re cute, too, but wily. And unlike your dog, dingoes have wrists that rotate. This means they can use their paws like hands. They also have much bigger canine teeth than domestic dogs. Their limbs are double-jointed, too, and they can turn their necks 180 degrees around. They run fast, climb with ease and jump high. They also howl like wolves. You’ll want to remember these facts for future camping excursions!

Despite this intelligence, these canines are generally thought of as pests by man. This tumultuous relationship can be traced back as far as 1788. That’s when the British first took sheep to New South Wales, giving dingoes a new easy prey. By the 1880s, dingoes were invading farms and rural communities. The solution was to build the “dingo fence,” a 3,500-mile (5,632-kilometer) fence that crosses Australia. It still stands today and is the longest fence in the world.

The population of pure dingoes has declined, as many have bred with feral dogs, domestic dogs and hybrids.

“Dingoes’ conservation status is currently considered ‘vulnerable,’ because dingoes mating with dogs that introduce new diseases that are not natural to dingoes,” explains Michelle Ferguson, an animal care supervisor at Brevard Zoo in Melbourne, Florida, which is home to two dingoes. “But they are protected in Australia.”

However one place where pure dingoes still can be found is on Queensland’s Fraser Island, though they’re wild and very predatory there, which has led to tragic incidents with humans.

A Dingo Did Eat a Baby

It’s sad but true. A dingo did eat a baby. Dingoes generally don’t attack people, but if they sense fear, they are more likely to attack.

Here’s the story behind the tragedy: In 1980, the Chamberlain family went camping near Australia’s famous Ayer’s Rock in the Northern Territory. Lindy Chamberlain, 32 at the time, saw a dingo leave their tent and immediately went to check inside it. She discovered that her 10-week-old baby, Azaria, who had been sleeping in the tent, was gone. Lindy supposedly cried, “My God, my God, the dingo’s got my baby!”

The authorities were called and there was a large, unsuccessful attempt to find Azaria. Many people heard about this disturbing and horrific event and it stayed with them, because it’s not every day that you hear about a dingo eating a baby.

The incident was a big deal. At that time, most people didn’t think a dingo could — or would — eat a baby. Authorities suspected Lindy of killing Azaria and then concocting the story about the dingo. Ultimately, she was arrested, tried and found guilty of murder in 1982. The baby’s father, Michael, was also found guilty of being an accessory after the crime.

There was widespread media coverage of the trial; people even picketed outside the courthouse with signs that read “The dingo is innocent.” Add a shocking murder to the already shocking “animal kidnapped infant” scenario, and dingoes dominated water cooler conversation around the globe.

Fast-forward to 1986: Both Lindy and Michael’s convictions were overturned when police discovered a baby’s jacket near an area full of dingo lairs: It was Azaria’s. On Sept. 15, 1988, the Northern Territory Court of Criminal Appeals unanimously quashed all convictions against Lindy and Michael Chamberlain. That same year two movies, one released in Australia and a second in the U.S. starring Meryl Streep as Lindy, were instrumental in “raising awareness” about the tragic event. (If nothing else, a panicked Meryl Streep saying, “the dingo took my baby,” was an attention getter.)

Finally, in 2012, after 32 years, the coroner officially changed Azaria’s cause of death to, “As the result of being taken by a dingo.” After the new ruling, Lindy addressed the court. “Obviously we are relieved and delighted to come to the end of this saga,” she said, adding, “No longer will Australia be able to say dingoes are not dangerous and only attack if provoked.”

Two years later Lindy was awarded $1.3 million for wrongful imprisonment and ultimately proved she was right all along. The dingo had taken her baby. Since the incident in 1980 when Azaria was killed, there have been several more documented cases of dingoes attacking and killing children — many as recently as 2019.