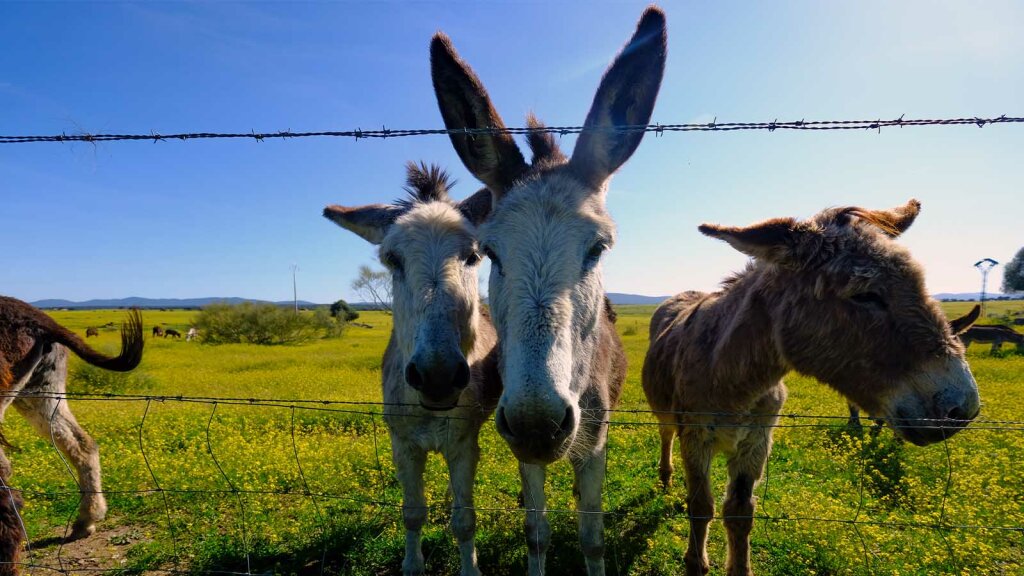 We may use the words interchangeably, but donkey, jackass, burro and mule aren’t really synonyms. Each term does relate to a donkey, but a jackass is not a mule, and all burros are not jackasses. (Following along?)

So what are these separate-but-similar creatures, all members of the equidae family? Let’s start with a look at the donkey.

What’s a donkey? A donkey is a domestic member of the horse family. Today’s domestic donkey is a descendant of the African wild ass, and these hard workers have been hauling goods since 4000 B.C.E., according to Encyclopedia Britannica. Donkeys are related to horses and zebras, although they’re often stockier, stronger and have much different personalities.

Unlike horses, donkeys aren’t easily startled. Even when they are, they don’t panic. Donkeys stop to assess the situation, a trait that’s commonly confused with stubbornness. This surefootedness paired with strength — they can carry up to twice their own body weight — make them ideal “beasts of burden.” These creatures are still used for transporting goods around the world, although other common uses like sheep and cattle protection play into the donkey’s lesser-known strengths. Once a donkey bonds with a herd of sheep, cattle or goats, it will protect the animals as it would its own, keeping dogs and coyotes at bay.

A jackass is just a male donkey. Before “donkey,” there was ass — a word that comes from the Latin phrase “asinus,” which refers to the animal. While ass is interchangeable with donkey, “jackass” refers specifically to a male donkey. This derives from the male donkey’s nickname “jack” paired with the original donkey terminology “ass.” Female donkeys are called “jennies” or “jennets,” but a female ready to breed is known as a “broodmare.”

A wild donkey is a burro. “Burro” is the Spanish term for the common working donkey in Spain and Mexico; it likely entered the English language in the U.S. when Spaniards brought burros to America’s southwest in the 1500s. This means unlike the jackass and mule, burro is actually just another way to say donkey. But the term does have a more specific meaning, and there are some specifications.

For starters, those living west of the Mississippi River often say burro while those to the east use the term donkey. Others use burro to refer to smaller donkeys or wild donkeys still roaming rangeland in California, Nevada, Arizona, Utah and Oregon, according to the Bureau of Land Management.

So what’s a mule? The word “mule” isn’t just another name for donkey; this animal is the offspring of a male donkey and a female horse. Mules, which are often between 35 to 70 inches (0.8 to 1.7 meters) tall, usually have the body of a horse and the extremities of a donkey, according to the Donkey Sanctuary. Their sounds are a blend of both parents; a mule bray begins with the common horse whinny and finishes with the hee-haw bray of a donkey.

Personality-wise, mules also have a bit of each parent. Mules are typically calm, steady and strong. That’s why riders often choose the surefooted mule over the sometimes flighty horse for mountainous and steep terrain.