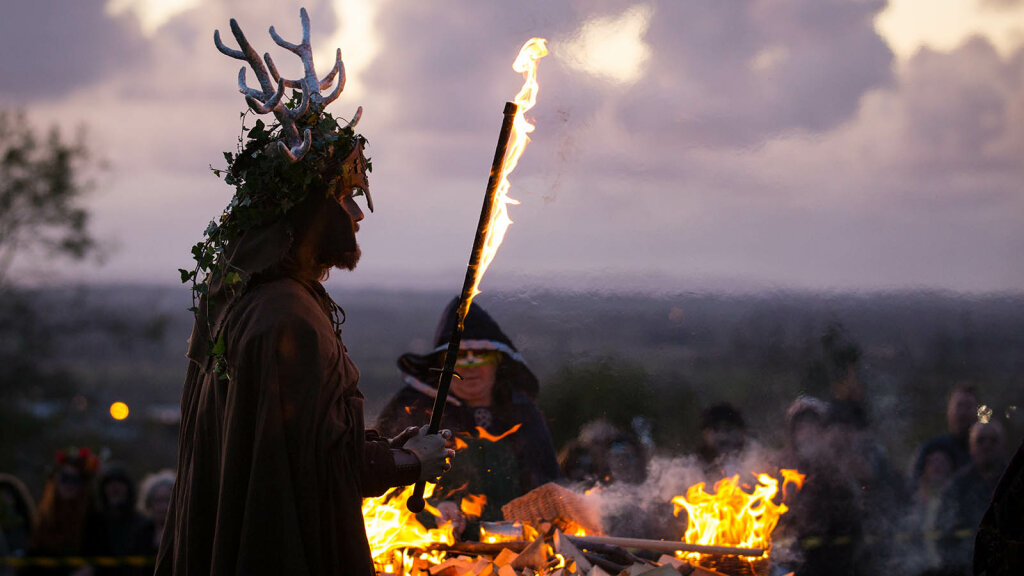 Say it with us: “sow-win.” That’s how celebrants pronounce “Samhain,” the name of an ancient Pagan festival that helped lay the groundwork for modern Halloween.

Not that one displaced the other. Samhain’s still around and is still celebrated today. Around the world, contemporary Pagans — from Wiccans to Druids — gather each year to observe the traditions and rituals associated with it. Bonfires are blazed; feasts are devoured. But Samhain isn’t just another scary costume party. For Pagan communities, it’s a deeply spiritual time of reflection and remembrance.

Historical records don’t give us a very clear picture of what the first Samhain celebrations entailed. The festival is Celtic in origin and its name comes from the Old Irish language. During Ireland’s early medieval period, which lasted from about 400 to 1100 C.E., Samhain marked the onset of winter.

Transition has always been a central theme of this festival. Samhain is said to be “when the summer goes to its rest” in the “Tochmarc Emire” (“The Wooing of Emer”), a medieval Irish tale.

Nowadays, Samhain is usually observed from Oct. 31 through Nov. 1. That puts it about halfway between the autumnal equinox and winter solstice. Medieval Samhain fests were likewise celebrated as October gave way to November.

(Side note: The Northern and Southern hemispheres experience autumn at different times. So modern Pagans living below the equator often wait until April/May to hold their Samhain rituals.)

By the time Samhain rolled around, the summer harvests were over and done with. Yet the harshest part of the winter season was still a few weeks away. This, according to the 2003 book “Stations of the Sun: A History of the Ritual Year in Britain” by historian Robert Hutton, made Samhain a perfect backdrop for important tribal meetings in pastoral Ireland. Some lasted for days.

Quite a few Irish folk stories were set during Samhain. Many involved the deaths of kings and other morbid or dangerous happenings. Supernatural forces became associated with the festival. Fairies, for instance, were said to be especially active during Samhain.

While historians debate its origins, at some point, the belief arose that Samhain was also a time when the spirits of one’s dead ancestors had easy access to our world — opening the door for communication between the living and the deceased.

Samhain got some competition late in the ninth century C.E. More than 300 years earlier, Pope Boniface IV had established May 19 as a Christian day of remembrance honoring those who’d died for their faith.

Was the date change a bid to “Christianize” Samhain rituals? The idea’s been suggested, but some scholars have their doubts.

Nevertheless, Halloween as we now know it owes a huge debt to All Saints’ Day. Another name that Christian tradition goes by is “All Hallows’ Day.” Past generations gave the night before (i.e., Oct. 31) a title of its own: “All Hallows’ Eve.” As time passed, this was shortened to “Hallow-ee’n” before the label ditched its punctuation marks and became “Halloween.”

Samhain in the 21st Century

Trick-or-treating. Costume parties. Watching the classic “It’s the Great Pumpkin, Charlie Brown” special on TV. Halloween fans love to indulge in some — or all — these spooky pastimes. If you’re a modern-day Pagan, you might have a slightly different itinerary on Oct. 31. (And Nov. 1, for that matter.)

“Dumb suppers” are among the traditions Samhain celebrants may choose to observe. This custom calls for a place setting to be left empty at an otherwise hearty meal. By design, the gesture honors a deceased ancestor or family member. All the living guests eat in silence as they reflect on the departed.

Sometimes, attendees burn messages written for the person in question. Sometimes, the dinner’s courses are handed out in reverse order. With dumb suppers, there’s a lot of room for variation.

Pagans can also get into the spirit of Samhain through quiet meditation. Or divination ceremonies. Or redecorating their personal altars with gourds, dried corn husks and other autumnal symbols. Because remembrance is such an important aspect of Samhain, the ensemble often includes photos showing loved ones who’ve died.

Outdoors, bonfire rituals are a Samhain staple among Druids. Pagan groups that keep gardens have also been known to treat the festival as a hard deadline for their harvests. Any edible material that isn’t gathered by the time Samhain ends is left behind — as a gift to the spirits.

And in keeping with this festival’s emphasis on transition, some Pagans treat Samhain as the beginning of the Celtic New Year.

Does all this mean Wiccans, Druids and other contemporary Pagans swear off Halloween? Not necessarily. There are those who enjoy the secular Halloween season, but don’t engage with it Oct. 31. Others make time for both trick-or-treating and Samhain rituals.