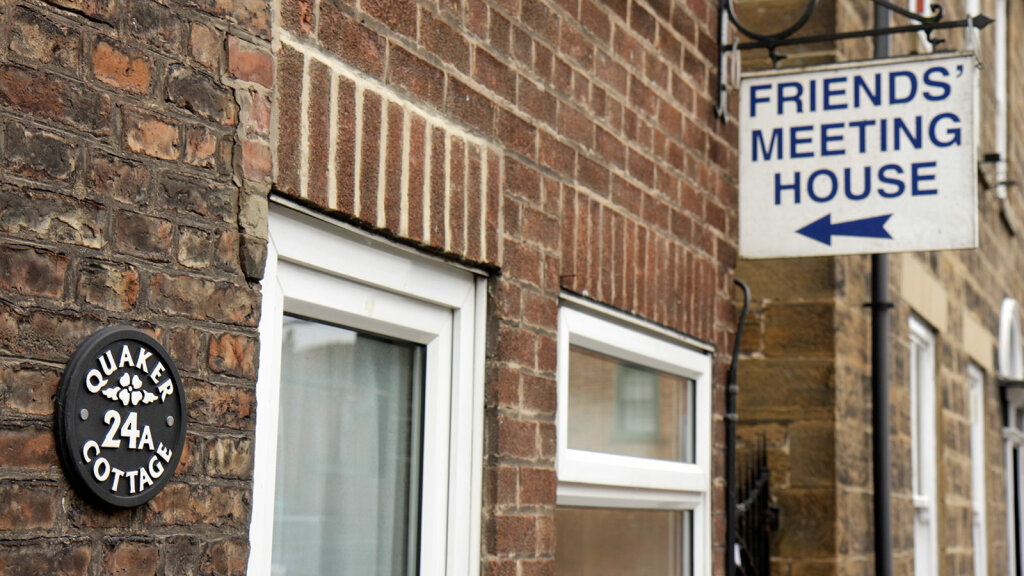 The most recognizable Quaker in the world isn’t even a real Quaker. In 1877, the owners of the German Mills American Cereal Company trademarked the image of “a man in Quaker garb” to make their rolled oats seem more wholesome and honest. But wait, isn’t he supposed to be William Penn, the Quaker who founded Pennsylvania as a utopia of religious tolerance and brotherly love? No, the Quaker Oats guy is not an actual person, says the brand, but rather an image that reflects the Quaker values of “honesty, integrity, purity and strength.”

So who are the real Quakers, formally known as the Religious Society of Friends? The first Quakers were a renegade Christian sect that broke with the Church of England in the 17th-century. Modern-day Quakers live all over the world, come from all walks of life and espouse a wide diversity of beliefs. The central conviction of Quakerism is that God (or “the Divine” or “the Light Within”) dwells in every man and woman, and that each person can receive direct revelation or inspiration from that same spiritual source.

Today, Quakers are relatively few in number — 380,000 members worldwide, according to Friends Journal in 2017 — but strong in a faith that encourages real-world action. Quakers live out their core principles through “testimonies” that include pacifism, environmentalism and social justice.  To learn more about Quakerism past and present, we spoke with Robynne Rogers Healey, a historian of Quaker Studies at Trinity Western University in Canada.

1. The First Quakers Were Radicals

Quakerism was born in 17th-century England, “a time of immense social and political upheaval,” says Healey, when the kingdom was rocked by bloody civil wars, the execution of a king and autocratic crackdowns on religious agitators. George Fox was one of those agitators, a radical Christian reformer who saw hypocrisy in the class-based hierarchy of the Church of England and taught that every person had equal access to God’s light.

Fox and his supporters never set out to start a new religion, but rather to purify Christianity by ridding it of paid clergy, sacraments like communion and baptism, and even church buildings themselves. Since the Church of England was the official state religion of England, Parliament could pass laws punishing religious dissenters. One such law was the Conventicle Act of 1664, which prohibited unauthorized worship meetings (called “conventicles”) of more than five people, a direct attack on the Quakers.

2. ‘Quaker’ Was Originally an Insult

Many of the names we use today for Christian sects — Baptists, Methodists, Mormons — were originally used as insults, including “Quaker.”

“‘Quaker’ was a derisive term that was thrown at George Fox one of the many times he was hauled into court for breaking the law,” says Healey. “The magistrate made an insulting comment about the quaking, shaking and other emotional manifestations of the spirit that accompanied Fox’s meetings, which were highly apocalyptic in nature.”

According to one story, Fox didn’t take kindly to the name and retorted that it was the magistrate who should be quaking and trembling for breaking the word the Lord.

The name that Fox and the other early Quakers preferred to call each other was simply “friend,” taken from John 15:14, in which Jesus said, “You are my friends if you do what I command you.” As Quakers began to get more organized, they took on the name the Religious Society of Friends or just the Society of Friends. Today, the word Quaker has lost its derogatory connotation and is used interchangeably with the Society of Friends.

Speaking of terminology, Quakers adopted their own type of “plain speech” that distinguished them from other groups, as well as a plain manner of dress. Until the 20th century, Quakers exclusively used the pronouns “thee,” “thou,” “thy” and “thine” because “you” was reserved for the upper classes and Quakers wanted to erase such class distinctions. Quakers also ditched the standards months and days of the week because they were named after pagan gods. Instead, they said “First Month” and “Second Month” or “First Day” and “Second Day,” with Sunday being the first day of the week. Even today, some Quaker meetings will list their worship service as “First Day at 10 a.m.”

3. Modern Quakers Are Defined by Diversity of Belief

Centuries have passed since George Fox first broke with the Church of England and Quakers have endured their fair share of “painful separations” caused by theological and doctrinal disputes, says Healey. The result is that modern Quakers represent a broad spectrum of spiritual beliefs, from a Bible-centered, evangelical-style Christianity to a more spiritual and agnostic approach.

If Quakers can be said to have core beliefs, chief among them is the conviction that God or the Divine is both within us and outside of us; that every person is endowed with a measure of the Divine and has equal access to revelation and inspiration.

While there is no single international organization for all Quakers, there are two groups that represent the two major schools in modern Quakerism. The Friends United Meeting (FUM) is decidedly Christian in its focus and its style of worship looks more like an evangelical church. The Friends General Conference (FGC), on the other hand, is more focused on spirituality and social justice, and views Jesus not necessarily as the Son of God, but as “a good guy and a model for how to behave,” says Healey.

There are also two schools of worship in modern Quakerism. “Programmed” meetings have a pastor, hymns and sermons and more closely resemble a standard religious worship service. But in much of the Quaker world, particularly in the United States and the United Kingdom, Quakers hold “unprogrammed” meetings that forgo most of the trappings of church and are largely held in silence.

Attending an unprogrammed meeting might be confusing to a first-time visitor. Members enter in silence, take a seat and begin a process described as “waiting worship” or “expectant waiting.” The expectation at an unprogrammed Quaker meeting is that by quieting the mind and body, you’ll be able hear the spiritual promptings of God. Occasionally, someone at a Quaker meeting might be prompted to speak, at which point they stand, share the “light” they received while listening to the spirit, and then sit back down in silence.

Waiting worship sounds like meditation, but it’s different in two important ways. For one, quieting the mind is not the end goal or waiting worship, but an entrance point for having a divine encounter or conversation with God. Secondly, waiting worship is not done in isolation on a mountain top, but within a community. Whether spoken or in silence, the understanding is that God is transmitting essential truths to the whole community, not exclusively to you.

A particularly spiritual meeting, in Quaker parlance, is called a “gathered meeting,” even if it’s silent the entire time. The meeting is over when people start to shake hands with their neighbors. Worship services are often followed by fellowship and socializing over coffee and snacks.

Silent worship on Sunday (sorry, First Day) morning is only one small part of being a Quaker. There’s an expectation to take the light and truth received from God and put it to work in the world. According to an old Quaker saying, you should “let your life speak” as a living testimony of God.

Pacifism, for example, is one type of Quaker testimony. Since way back in the 17th century, Quakers have called for an end to all war and violence, and modern Quakers have played influential roles as conscientious objectors and “ban the bomb” activists.

“We utterly deny all outward wars and strife and fightings with outward weapons, for any end or under any pretence whatsoever, and this is our testimony to the whole world.”

Other Quaker testimonies include equality (including, historically, the abolition of slavery), integrity, simplicity, community and care for the Earth and the environment. One prominent example of Quaker testimonies in action is the Quaker United Nations Office (QUNO), an organization that dates back to the original 1945 UN Charter and works to promote Quaker values of peacemaking and environmental stewardship across the world.

Early on, George Fox realized that because Quakers don’t believe in oaths, creeds or clergy, there needed to be an organizational structure that kept the faithful on the same spiritual page, more or less.

“Fox may not have been a great theologian, but in modern terms he was a fabulous bureaucrat,” says Healey. “He really knew how to organize.”

Quakers worldwide are organized into tiered groups called “meetings.” There are local, regional and national meetings, but they don’t go by those names. Instead, a local Quaker meeting — the people with whom you worship every Sunday — is called a “Monthly Meeting” or a “Preparative Meeting.” Within a geographic region, there is also a “Quarterly Meeting” which meets, yes, quarterly, to discuss the needs of the several Monthly Meetings in the area. The “Yearly Meeting” is the largest of the umbrella organizations and can encompass an entire country or a large geographic area like the Southeastern Yearly Meeting in the U.S.

Quakers might identify themselves by any or all of these subgroups. For example, one might say, “I’m a member of the Harrisburg Monthly Meeting of the Caln Quarterly Meeting of the Philadelphia Yearly Meeting.” Healey contends that Fox’s “meeting” structure is what has kept Quakerism relevant and alive over the centuries.

“[The meeting structure] isn’t only for the purpose of trying to determine what’s happening in different places, but to better be able to care for all of the members,” says Healey.

Quaker meetings come to decisions by a consensus, but not by voting. The matter is discussed among the group until a suitable decision is made and recorded by a clerk.

7. Quakers Made It Big in Chocolate, Not Oats

Some of the biggest names in the British confectionary business were founded by Quakers, including Cadbury, Fry’s and Rowntree’s.

For centuries, only members of the Church of England could attend university, says Healey, so many Quakers pursued a “practical education” in the trades and became successful businessmen. In the early 19th century, Quakers were strong supporters of the temperance movement and some Quaker tradesmen began promoting drinking chocolate as a tasty yet tame beverage choice. Next came chocolate bars.

Quaker-owned chocolate companies earned a reputation for fair dealing and high-quality goods free of contamination. Firms like Cadbury went the extra mile for its workers, building them an entire village in Bournville with schools and parks and an employee swimming pool.

Some other hugely successful Quaker-owned businesses were the British banking giants Barclay’s and Lloyd’s of London.

8. The Future of Quakerism Is … Kenya

While the number of Quakers in Europe and the U.S. shrinks every year, there’s been an explosion of Quaker converts in Africa, particularly Kenya. By some estimations, more than half of today’s Quakers live in Africa, and as many as a third of all Quakers live in Kenya.

Christian Quaker missionaries arrived in Kenya in 1902 and found a receptive audience among peace-loving tribes in places like Kaimosi. Because of their evangelical roots, Kenyan Quakers are far more likely to identify as Christian than Quakers in the West. Kenyan Quakers also have programmed worship services with charismatic pastors, big choirs and worship bands, a far cry from the silence of unprogrammed meetinghouses in New England.

The growth of Quakerism in Kenya and Latin America hasn’t been without controversy. There are stark ideological differences between the subdued old-school Quakers and the youthful, so-called “noisy Quakers” in Kenya. Divisions over same-sex marriage between liberal and conservative Quakers, for example, almost canceled a Quaker gathering in Kenya in 2012.

Sports Today – What the new CBA means for MLS: Players getting their share