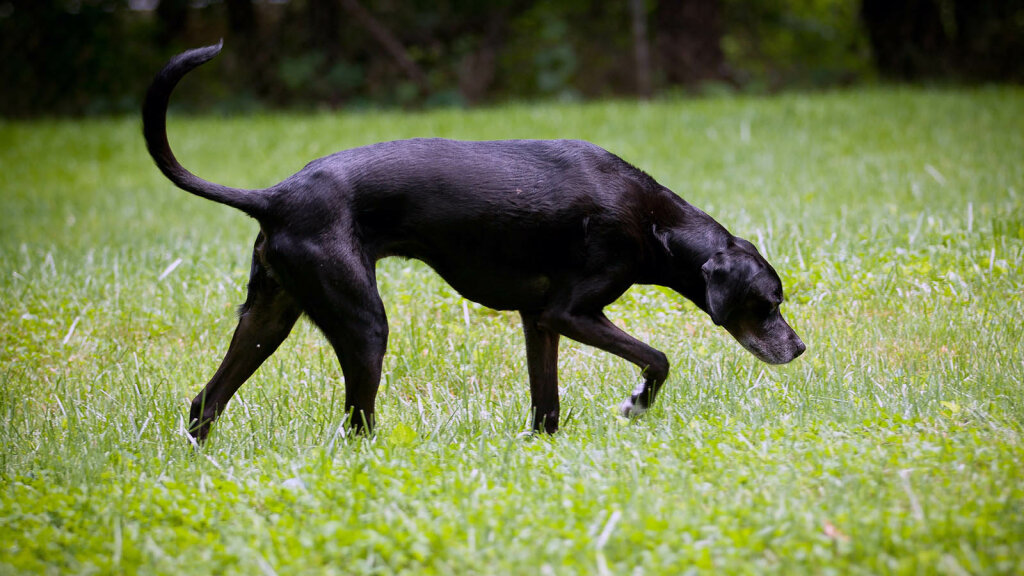 But what causes anosmia? Is it caused by age, disease, trauma?

“The list of concerns is going to include things like infections of the lining of the nose or chemical irritants, things that can cause inflammation of the nose lining, whether that be infectious or otherwise,” she says. “Also, problems of the brain can actually cause issues with smell.”

The link between a dog’s nose and its brain is nothing short of astonishing. The canine nasal cavity (or olfactory lobe) is positioned directly behind the nose itself. It is lined with all kinds of tiny nerve cells that connect directly to the brain. Dogs have up to 300 million olfactory (also called odorant or smell) receptors depending on the breed compared to about 6 million in humans.

“In dogs, the olfactory lobe is massive,” says Moore. “If you were to look at a dog’s olfactory lobe compared to a human, it’s huge in a dog. It’s because their sense of smell is so highly developed. Problems in that area of the brain can cause altered smell. So, tumors of the brain, strokes, head trauma, injury can all impact the sense of smell.”

Can It Be Treated?

However, once the veterinarian knows what is causing the anosmia, it can usually be treated. A sinus infection caused by bacteria is typically treated with antibiotics. If the problem is brain-related, such a tumor, surgery may be an option, or they can try radiation therapy.

Loss of smell is temporary when caused by an allergic reaction to medication or exposure to chemicals or other irritants and will usually wear off with time, though some loss of smell may linger. However, viral infections that cause loss of smell could become permanent, depending on which virus is causing it.

Moore says questions about the link between aging and anosmia in dogs are fair because there’s some evidence that the condition is linked with aging in people, though she has yet to see studies done linking the condition in dogs.

For dogs with viral infections or those that can’t otherwise be treated, the good news is that if it’s just a loss of smell, the dogs usually do pretty well with their lot in life.

“However, if they have a job that requires smell, they may have to change their line of work,” says Moore.

For pups with brain tumors or other brain related issues, the result is more complicated and unfortunately, less cheery.

“The problem with brain tumors is that they do get worse and tend to grow and cause other problems eventually,” Moore says. “There is some palliative care we can provide, sometimes we can use steroids to help with inflammation around the tumor, and that can be helpful for a period of time but it’s not a permanent fix. From a quality of life standpoint, if they’re having a lot of other problems, owners might need to consider putting their dog to sleep.”

Moore says that is definitely a worst-case scenario and that in the vast majority of dogs, anosmia is a condition that will not limit a dog’s quality of life.

“While it might cause a change in the dog’s behavior,” she says, “The good news is that the most common cause of loss of smell in dogs is related to sinus infection so most of those are going to be treatable problems.”

Sports Today – Hamilton: I want to stay in F1 to change the world