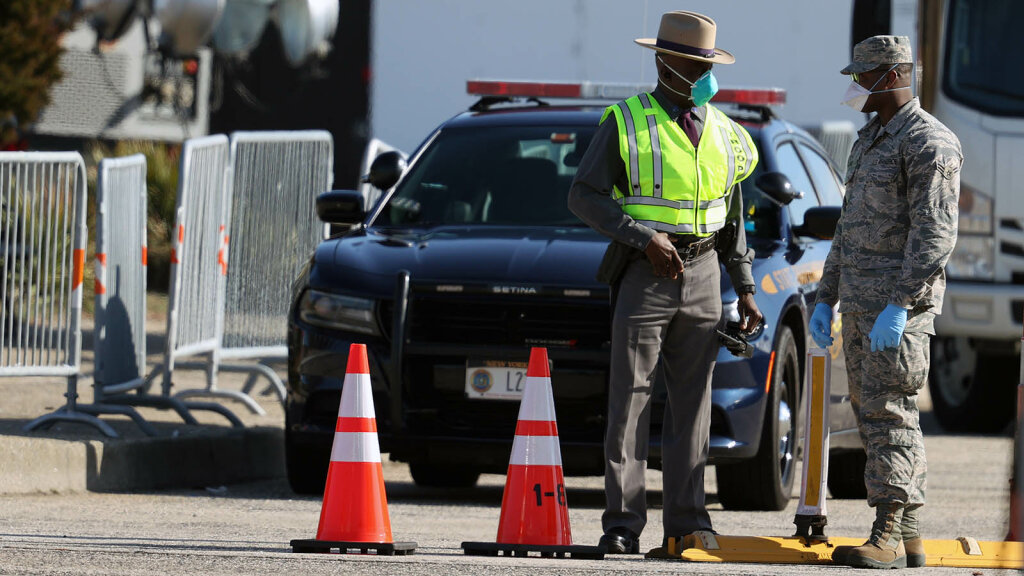 On March 12, 2020, President Donald Trump was asked at a news conference if he might institute travel restrictions of U.S. citizens to Washington state or California, to stop the spread of the COVID-19 virus.

“We haven’t discussed that yet,” Trump said, according to the White House transcript of his remarks. “Is it a possibility? Yes. If somebody gets a little bit out of control, if an area gets too hot.”

Trump already had shut down travel from China and much of Europe for everyone except U.S. citizens, and permanent residents and their families. But his admission that the federal government might try to restrict movement inside the U.S. itself made headlines across the world. Several days later, on March 16, Trump again revisited the issue, and said he was not seeking to impose such restrictions — for now.

“We think that hopefully we won’t have to do that,” Trump told a reporter. “But it’s certainly something that we talk about every day.”

What Is a Cordon Sanitaire?

For the U.S. government to impose a cordon sanitaire — the technical term for closing off an area to stop spread of a disease — around an entire state would be unprecedented in U.S. history. It would even go beyond Chinese authorities’ lockdown of Wuhan and several other cities in Hubei province, where the coronavirus pandemic originated in December 2019.

But given the rapid spread of COVID-19, at least one other prominent politician — Florida Gov. Ron DeSantis — has urged Trump to restrict domestic travel from cities that have outbreaks. “When you constantly have it being brought in, it makes things more difficult,” DeSantis said during a news conference, according to ClickOrlando.com. “I think the administration needs to look at domestic flights from certain areas that have outbreaks.”

But many legal experts question whether the federal government even has the authority to close the borders of a state, saying that such an action might be blocked by the courts as unconstitutional. Some also think it would be difficult to carry out, and not necessarily useful in protecting public health.

“Such measures would need to be least restrictive to be constitutional because you would be infringing greatly on individual liberties and the right to travel,” explains Leila Barraza, an assistant professor in the Mel and Enid Zuckerman College of Public Health Community, Environment & Policy at the University of Arizona.

Barraza says the federal government’s legal authority to impose quarantines would come from Section 361 of the Public Health Service Act, “which authorizes the U.S. Secretary of Health and Human Services to take measures to prevent the spread of communicable diseases from foreign countries into the U.S. and between the states.”

“Thus, quarantine and isolation measures undertaken must be for those entering the U.S. or those traveling between states,” Barranza explains. “Quarantine, isolation and other measures within state borders are governed by the states themselves under their police powers. Due to the federal government’s authority over interstate commerce, there could be an attempt to restrict travel between states; however, this has not been employed in recent times.”

One skeptic is Georgetown Law professor Lawrence O. Gostin, faculty director of the O’Neill Institute for National & Global Health Law. In this recent article in Health Affairs, he argued that a Chinese-style mass quarantine of an entire city, in which police and informers would patrol the streets and citizens would be kept under surveillance through smartphone apps, would be “so contrary to American values and the rule of law” that it was hard to imagine it ever happening here.

“Internal travel restrictions are constitutionally problematic because the president does not have power to force a state to lockdown,” Gostin explains via email. “The right to travel is also deemed fundamental under the Constitution.”

Would U.S. Citizens Comply With a Travel Ban?

George J. Annas, a professor and director of the Center for Health Law, Ethics & Human Rights at Boston University, also cites constitutional barriers to the federal government shutting down a state’s borders. But he also argues that it would be unworkable because the public wouldn’t cooperate.

“If the public does not support any drastic or extreme measure by the government, it cannot be imposed on it,” he says via email. “Americans, at least some, would likely flee a state that they believed the government had labelled as especially dangerous or ‘hot,’ and the National Guard would not use force to try to stop them.”

Additionally, Annas warns that imposing a quarantine on California or New York “would seem to be an entirely political move to punish the state because it voted Democratic.”

Even if such a quarantine could be enforced, Annas points out that it wouldn’t necessarily do much to stop COVID-19 from making people sick and claiming lives. “Quarantining an entire state would be seen as (1) useless as a prevention measure now that the virus is in all 50 states; and (2) arbitrary as not based on any public health rationale or practice.”

Would Closing State Borders Even Be Effective?

But one legal expert believes that if the Trump administration moves to restrict travel between the states, it could well prevail in the courts. The legal argument against such a cordon sanitaire “has come down to lack of compelling necessity and the availability of less restrictive means,” Scott Burris, professor and director of the Center for Public Health Law Research at Temple University’s Beasley School of Law, says via email.

However, “given the way this has spread so far, and the arguments for suppressing the peak and spreading the cases over a longer time, I don’t see any courts saying that these orders violate constitutional rights on those grounds.”

“There is nothing in the Constitution that explicitly addresses this situation,” Burris argues. “All rights are subject to restriction when reasonable and necessary to avert harm and protect public safety and order. The real issue, then, is whether a particular order is in fact a reasonable and necessary way to prevent a significant risk of harm. If the health authorities can make a credible argument that the measure is necessary, they have the authority to act.” And while opponents could sue to try to stop a border lockdown, “courts are not keen to step in and substitute their judgment for health officials’, so there is going to be deference.

“When it comes to the Constitution and what really matters, I continue to bang the second-order drum of inequality in the effects on and needs of people subject to the order,” Burris says. “I would argue that the real constitutional issue here lies in substantive due process and the social obligation to limit the harms caused by collective measures of protection. People of modest means who live paycheck to paycheck in service jobs are at extraordinary risk. This week everyone is being a good soldier, but the pain is going to get bad fast.”

But Burris also notes that even without a ban, there are other ways to discourage Americans from traveling during the outbreak. The U.S. Centers for Disease Control, for example, has put out this ominous advisory, which reminds potential travelers that if they come in contact with an infected person during their trip, they may be asked to submit to a 14-day quarantine upon returning home. Even then, they run the risk of infecting relatives who are older or have chronic health conditions, who are most at risk of serious illness or death from COVID-19.

“Keep in mind that vacationers are not traveling because they are scared and because all the destinations are closed, and business travelers are not traveling because their companies have forbidden it,” Burris says. In that sense, “this issue is already over. We don’t really need to worry a whole lot about the few people who still need to get home.”