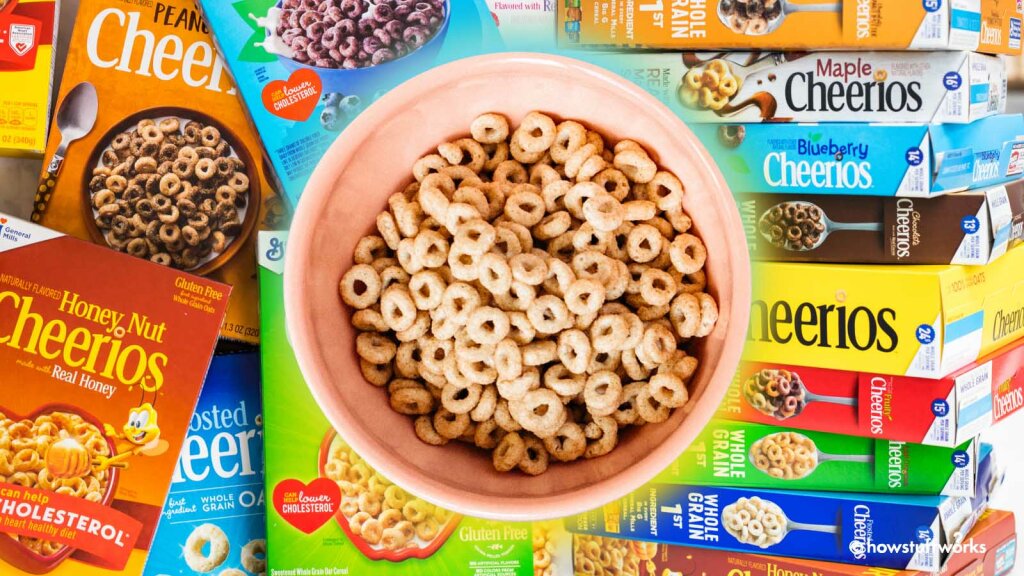 Breakfast is one of the few things on the planet everyone from every country can get behind. Whether your first meal of the day is a bowl of cereal or violet-purple pancakes made from an exotic tuber, breakfast is the great unifier.

But let’s get back to cereal. As a kid, you probably loved two kinds: the super-sweet cereal that came with toys inside and of course, Cheerios. If you were lucky enough to eat the latter every morning, you know firsthand how it’s one of those cereals you cannot outgrow. It was probably the first cereal you ever tried, and it very well may be the last cereal you’ll ever eat.

So where did this classic cereal originate, and how does it get that shape? Read on for the answers, plus more details about Cheerios, you know, for those of us who just can’t give up our obsession with one of the best breakfast cereals out there.

True story! Cheerios made their world debut in 1941 when a physicist working for General Mills named Lester Borchardt developed a machine that puffed oats. The company wanted a product that would compete with Wheaties and Corn Flakes. Those popular cereals were made of corn, but General Mills made Cheerios with oats.

2. They Were Originally Called “Cheerioats”

Because General Mills went with oats instead of corn for its new cereal, it marketed that in its name — Cheerioats. But then Quaker Oats claimed using the word “oats” was trademark infringement, so General Mills changed the name of the breakfast cereal to simply Cheerios in 1945. The name Cheerios plays on the O shape of the puffed oats much better than Cheerioats, anyway.

The iconic O shape we now know wasn’t always the plan. In fact, according to General Mills, the company tested more than 10 shapes and sizes until it settled on the iconic Cheerio. But the cereal has strayed from that shape on a few occasions. In honor of the millennium, Cheerios introduced Millenios, a brown sugar-flavored cereal with tiny numeral 2s in addition to the familiar O-shapes so you could easily spell out 2000. And more recently, in honor of National Heart Health Month in February 2020, General Mills added heart shapes to Honey Nut Cheerios and original Cheerios.

Three years before the beloved Honey Nut Cheerios was introduced in 1979, General Mills released Cinnamon Nut Cheerios in 1973. It was the first official “flanker” for the brand (flankers are the different varieties of Cheerios available in stores). “With Cinnamon Nut Cheerios, we discontinued a product that would have been OK for a year or two, but we didn’t want the first Cheerios flanker to fail,” Ted Cushmore, the marketing director of Big G family cereals in the 1970s, said on the General Mills blog. “The cereal didn’t have a broad enough flavor profile, so rather than reformulate we decided to start over to see if we could generate new and better ideas.” Just a few years later in 1979, the company followed up with the massively successful Honey Nut Cheerios. But despite the name, Honey Nut Cheerios doesn’t include nuts. The recipe was updated in 2006 replacing ground almonds with almond flavoring.

5. And It’s Not the Only ‘Flanker’ Either

Her name? Cheeri O’Leary. She appeared in cartoon ads during the 1940s — many on the back of Cheerioats boxes — before the animated “The Cheerios Kid and Sue” became the chief supporters of the cereal in the 1950s and ’60s. But the commercial support of the cereal didn’t end there. General Mills was already sponsoring the mega-hit radio show the “Lone Ranger” in the early ’40s, and that continued well into the 1950s with Cheerios. During the 1960s, Cheerios joined forces with Rocky and Bullwinkle to continue to appeal to children. And in more modern times, superstars like Usher and NASCAR Hall of Famer Richard Petty have even showed their support of the cereal in ads.

Yes … Cheerios are made from oats, and oats are naturally gluten-free. But to meet the Food and Drug Administration’s strict guidelines for adding the gluten-free label on the boxes, General Mills had to develop a way to sort out the minute amount of wheat, rye and barley that would inevitably wind up contaminating those oats at the farm or during transport. So it designed a system that can sift millions of pounds of oats every day to ensure that every 15,000 grains of oats have no more than one grain of wheat, barley or rye contamination. Once those oats are milled into flour, it’s checked again for gluten before it’s loaded into dedicated gluten‑free trucks and rail cars.

What parent hasn’t given their little one a handful of Cheerios? The finger food seems to be the go-to for babies just learning to feed themselves. So what is it that makes the cereal so ideal? Well the shape is perfect for those tiny fingers to grip and pick up. Plus, because they’re puffed, and have the unique O shape, they dissolve easily without having to be chewed, which means they’re also less likely to cause choking.

8. How They Get That Signature Shape

If you’ve ever wondered how they get those tiny holes in the middle of every little Cheerio, you’re not alone. It’s actually a pretty simple process. Once the dough is mixed, it’s forced through a die cut that forms it into the iconic looking O. Those fresh dough Cheerios are then dried and fed into what’s called a puffing gun, where they’re puffed and toasted dry. Pretty cool stuff.

Hollywood Today – Nick Jonas Jokes Being on The Voice is a Lot Like...