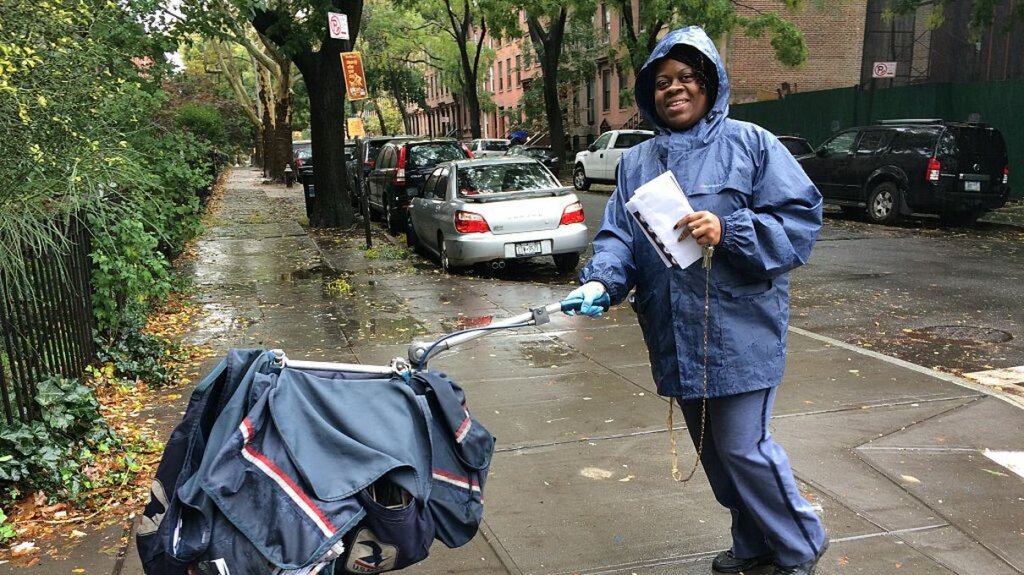 There he is again, just like yesterday and last week and seven years ago. “Neither snow, nor rain, nor heat, nor gloom of night” keeps your loyal mailman from making his daily rounds in his powder-blue shirt, gray shorts and occasional awesome safari hat. But how exactly did your trusty mail carrier get assigned this specific route, and how long is he or she stuck with it?

According to Sue Brennan at the United States Postal Service, your mail carrier’s route is one of more than 74,000 rural postal routes and nearly 145,000 city routes across the nation. The longest single route in America is in Mangum, Oklahoma, where a well-traveled rural carrier drives 182.75 miles (294 kilometers) a day to serve 248 customers. The shortest route is in Athens, Georgia, where a city carrier walks 950 feet (289 meters) to make 281 deliveries.

“If you’ve had the same letter carrier for a long time, that probably means you’re part of a desirable route.”

Brian Renfroe is a second-generation letter carrier from Hattiesburg, Mississippi, currently serving as executive vice president of the National Association of Letter Carriers, a labor union representing America’s 200,000 city postal workers. Renfroe was happy to explain the process by which an individual postal route is designed and assigned.

For starters, Renfroe says, rural carriers and city carriers have different systems for determining the size of a route. A rural carrier’s route is much more consistent, and he or she is paid for the amount of time it takes to complete the route. For city carriers, the guiding principle of route design is for a carrier to complete the route in as close to eight hours as possible.

As you can imagine, an eight-hour route looks a lot different depending on your location. In a dense urban center full of high-rise apartments, it might take a postal worker eight hours to service a couple of blocks. Out in the suburbs, another postal worker might walk and drive miles delivering to hundreds of single-family homes.

The size and dimensions of each route are calculated using a combination of computer-based mapping software and old-fashioned, on-the-ground experience.

“The Postal Service has a computer program that maps the exact location of every delivery point. Not just ‘this house is here,’ but where the mailbox is,” says Renfroe. “And this program uses a number of algorithms to try to generate the most efficient way to travel the route based on the time value that’s assigned to each street.”

The computer’s timing of the route is just a starting point. Then it’s the postal manager’s job to “account for reality,” says Renfroe, which includes all the variables that can impact the time it takes to complete a route. There are seasonal fluctuations in mail volume. There’s inclement weather. There’s road construction and new home construction and the very human differences between one carrier and the next.

“Some letter carriers are tall, some are short, some are young, some are older, some are faster, some are slower,” says Renfroe. “There are all sorts of variables that play into it.”

There’s no set time to deliver mail at a particular house. The postal carrier has to spend a few hours sorting the mail into trays before heading out on his or her route. The trays correspond to the order of the route. If the houses ahead of you on the route happen to be heavier on mail than usual on one day, the letters may get in your box later than on another day, even if the weather is good and there’s no road construction or other delays.

Keeping the routes as close to eight hours as possible requires regular adjustments. Postal managers will conduct six-day route inspections to accurately time each part of the letter carrier’s day, from the daily morning sorting to the on-the-street delivery to hanging up the bag at night.

If a carrier’s day is stretching closer to eight-and-a-half hours, the postal manager will slice off a portion of his or her route and divvy it up among nearby carriers with lighter loads. That explains why you might see a new face on your route every couple of years.

Otherwise, the assigning of routes at any given post office is done by seniority. When a route is vacated — the carrier quits or retires — or a new one is created, all the carriers in the office get to bid on the route. The carrier with the most seniority wins. If you’ve had the same letter carrier for a long time, that probably means you’re part of a desirable route. Or those cookies you give him on National Postal Worker Day (July 1) are paying off.

In addition to the long-term route adjustments that are made every few months or years, the Postal Service also makes short-term route fixes.

When letter carriers show up to work every morning, they look at the day’s mail volume and make an estimate of how long it will take to complete their assigned route. Maybe it’s a snow day, or a day after a holiday when mail volume is doubled. If they know it’s going to take more than eight hours, they can either volunteer for overtime — overtime signups are every three months — or the supervisor can assign a portion of the route to other carriers for the day.

“It’s actually much more complicated than that, but that’s a simplified way of explaining how it works,” says Renfroe, noting that individual post offices in big cities like New York, Los Angeles or Boston might have 200 to 300 letter carriers to manage.