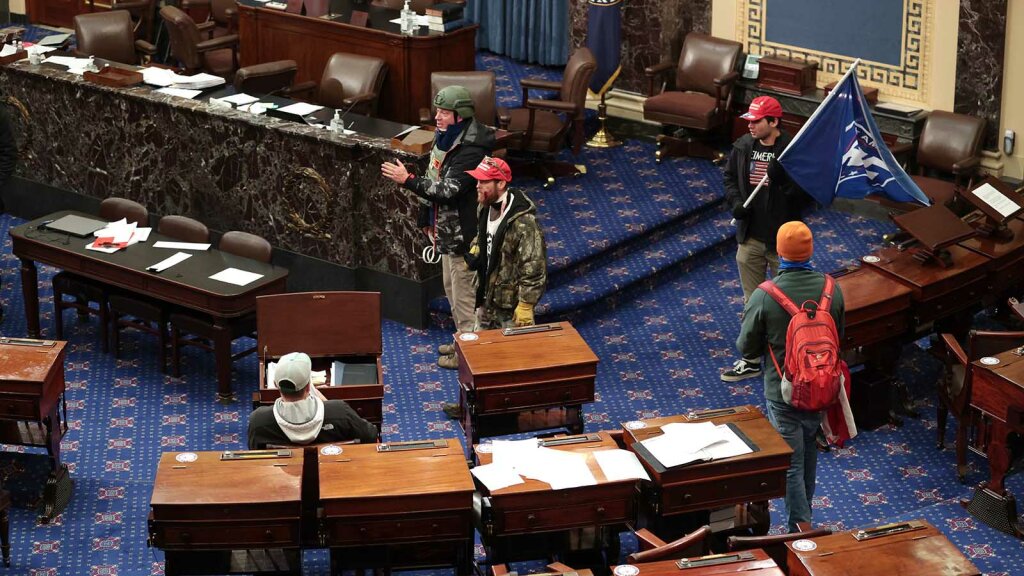 In the stunned aftermath of the insurrection that occurred at the U.S. Capitol on Jan. 6, 2021, people rushed to Twitter and Facebook to match names with the faces of rioters who stormed the floor of the Senate, Speaker of the House Nancy Pelosi’s office and the National Statuary Hall. Many of the rioters posted videos of themselves online; others live-streamed the event in which five people were killed. The FBI also posted multiple Tweets asking for help from the public to identify individuals who unlawfully entered the U.S. Capitol.

The tactic of publicly shaming someone by posting their personal information online is called “doxxing,” an internet-ism that means publishing private, damaging or otherwise sensitive “docs” about someone in order to bring the wrath of the internet down upon them. Doxxing is one of those trolling tactics that’s been used to harass and threaten women who dare to call the gaming industry “sexist” (see Gamergate) and to intimidate journalists who dare to do their jobs.

But doxxing has also emerged as a tool of progressive activists, like the anti-fascist crusaders who took to Twitter after the Charlottesville tragedy to name and shame white supremacists who “forgot to wear their hoods” and exposed themselves publicly as racists.

One man identified as Cole White from California lost his job at a hot dog restaurant due to his involvement in the white nationalist march in Charlottesville. The father of Peter Tefft, another Charlottesville marcher caught on film, was so disgusted by his son’s behavior that he wrote a letter to the local paper repudiating his son’s beliefs, saying that he’s “not welcome at our family gatherings any longer.”

Many of the U.S. Capitol rioters and protesters also lost their jobs after their identities were made aware to their employers. A Maryland man who worked for Navistar Direct Marketing was fired after he was seen in the U.S. Capitol wearing a Navistar company badge on Jan. 6, 2021. Chicago real estate company @properties also fired an agent who posted on social media that she was at the Capitol. These are just two examples of many.

White supremacists and neo-Nazis seem like fair game for doxxing, since most people find their beliefs and actions deplorable, but that doesn’t mean that outing Nazis on the internet doesn’t have collateral damage.

In that same letter from Peter Tefft’s dad, he writes that “[Peter’s] hateful opinions are bringing hateful rhetoric to his siblings, cousins, nieces and nephews as well as his parents. Why must we be guilty by association?” And in the rush to identify Charlottesville marchers through social media crowdsourcing, at least one person was wrongly identified, with immediate negative consequences.

How Hard Is It to ID Someone?

Criminologist and sociologist Stanislav Vysotsky of the University of Wisconsin, Whitewater told us in 2018 that anti-fascist activists have been using the tactics of doxxing for decades — early campaigns would march to a white supremacist’s house and distribute flyers to his neighbors — but that something is getting lost in these recent crowdsourcing efforts.

“When anti-fascist groups engage in these kinds of doxxing processes,” Vysotsky said of distributing flyers at someone’s house, “they take great pains to verify. There are multiple pieces of verification. With crowdsourcing, sometimes you don’t get level of verification.”

On social media, the level of verification can be one person mentioning, “I think I went to high school with that guy,” or “He looks like this other pic of a white supremacist that I found on a wiki.” In several cases, those claims turned out to be wrong and were quickly corrected by others.

Vysotsky says that’s actually one of the potential benefits of crowdsourcing, that the sheer numbers of people investigating could result in accurate information surfacing much faster than if a handful of people are searching around blindly. The downside being that if enough people jump on the wrong information, innocent people get harassed almost instantaneously by the mob, and sometimes that false information lingers because nothing ever really goes away on the internet.

It’s not as easy to ID someone as you might think. Studies have shown that 10 to 30 percent of the time people get it wrong when asked to determine whether two photos are of the same person.

Some critics say that publishing anyone’s personal information online for the express purpose of harassment is bad, even if that person spouts hate speech. But Vysotsky who studies social movements, says the tactics that activists use are themselves neutral. They’re simply tools that can be used for bad or good, depending on which side you stand.

As expected, both neo-Nazis and anti-fascists complain when doxxing is used against them, and celebrate when it’s deployed against their enemies. Vyotsky says that “outing” people via doxxing increases the “cost of participation” in a protest march.