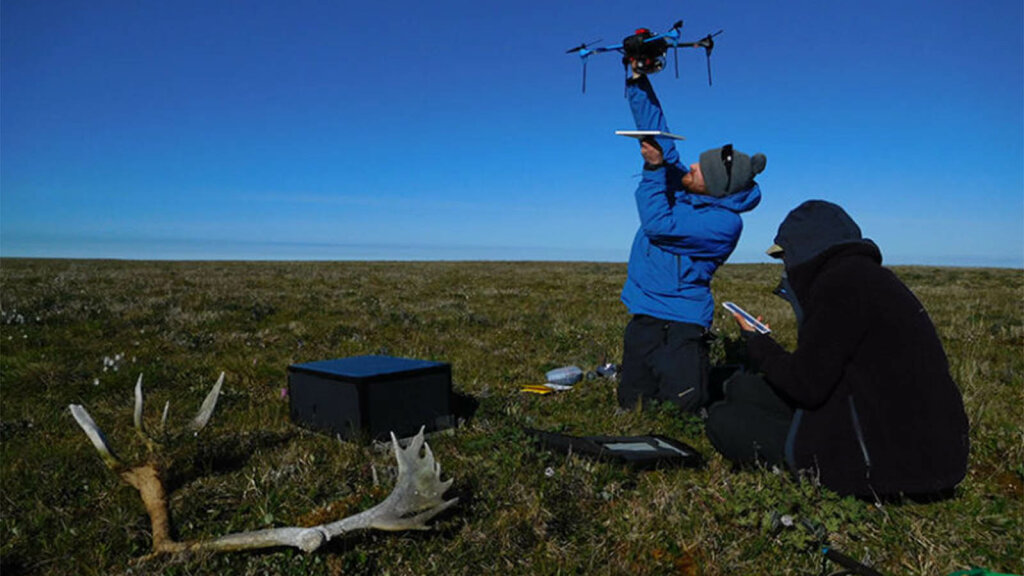 Satellites tell us about the Arctic, “but through a fuzzy lens,” says study co-author Jeff Kerby at Aarhus University in Denmark. Satellite data dating back to the 1970s and 1980s can be helpful, but “the pixels are maybe the size of Manhattan,” he says. “From this satellite data, we have evidence of change, just not the information to understand the change.”

The High-Latitude Drone Ecology Network creates a standardized protocol for tundra vegetation monitoring. The tundra is a fluctuating and complex ecosystem, with climate variables affecting accurate interpretation of satellite data. Arctic snow cover can occur any time of year and obscure what’s happening with the plants below. Often cloudy, the Arctic is also dark for half the year. When present, the angle of Arctic sunlight can create huge shadows. “Shadows are great if you’re taking landscape photos for fun but bad if you’re trying to understand plants with a computer,” Kerby says. A green plant in shadow doesn’t look green.

Enter the drone. Even when fitted with fairly simple, off-the-shelf digital cameras, drones can create a clear picture of what’s happening on the ground. Photos of the same thing from different angles, stitched together, can produce 3D models. Kerby and Myers-Smith have formed the High-Latitude Drone Ecology Network, creating a standardized protocol for tundra vegetation monitoring.

Initially skeptical about the utility of drones, Northern Arizona University’s Scott Goetz, who was not involved in the recent study, is now convinced of their value. “Scale is one of the key issues with remote sensing,” says Goetz, science lead of NASA’s Arctic Boreal Vulnerability Experiment (ABoVE) and deputy principal investigator for science on NASA’s Global Ecosystem Dynamics Investigation.

A complete picture isn’t possible with field measurements alone, but linking satellite remote sensing with field data has been a long and challenging path, Goetz explains, also noting that remote sensing resolution is improving. “It’s not that NDVI doesn’t work or that we can’t monitor [plant growth] in a systematic way. It’s more an issue of the component of the system that you want to measure.”

NDVI data, found Cunliffe and collaborators, performed poorly when it came to indicating plant biomass because this broad-scale indicator of greenness doesn’t discriminate between tiny green organisms like moss or lichen and larger forms like shrubs.

Alemu Gonsamo, a remote sensing vegetation and climate change scientist at McMaster University in Canada who was not involved in the current study, says that if drone-derived structural measures are properly integrated with lidar and greenness measures, “they provide an unprecedented opportunity to monitor changes both in tundra greenness and canopy structure such as canopy height and aboveground biomass.”

When it comes to the utility of drones in this context, people are just getting started, says Northern Arizona University’s Logan Berner, a collaborator on NASA’s ABoVE project. Of Cunliffe’s study, Berner, who leads a study assessing Landsat NDVI trends across the Arctic tundra biome since the 1980s, says, “There is tremendous potential for the sort of work that they have done to improve our understanding for what these changes in tundra greenness mean, why they’re happening, and how the Arctic might change in the future.”

This story originally appeared in Eos and is republished here as part of Covering Climate Now, a global journalistic collaboration strengthening coverage of the climate story.