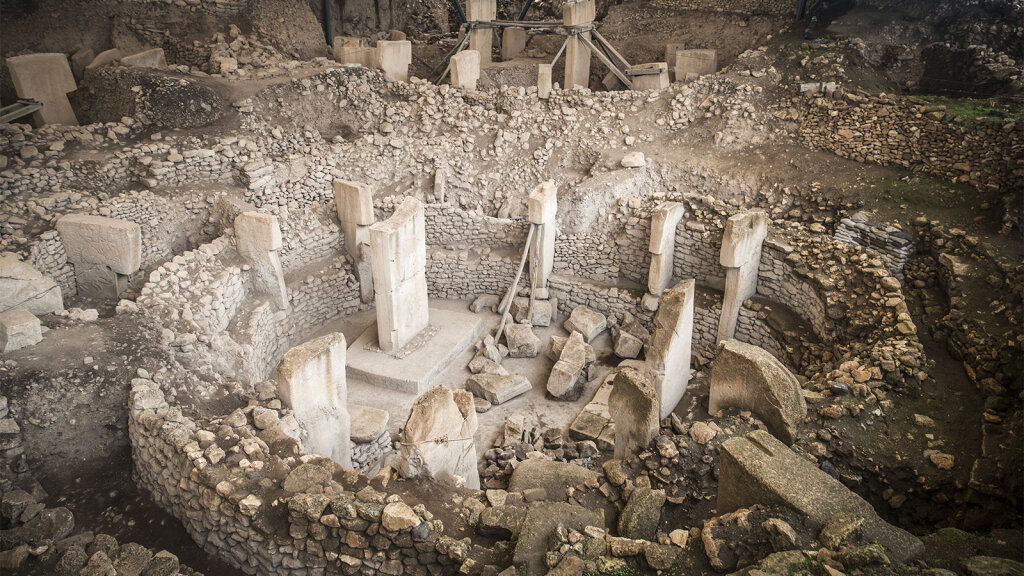 “Special purpose” refers to a type of structure that wasn’t regularly inhabited: a temple, a sanctuary or a place for dispersed groups to gather at appointed times. According to Notroff, the current interpretation of Göbekli Tepe as a monument rather than a home does not rule out inhabitation of the site at some point or the existence of other architecture nearby that has yet to be uncovered. However, Göbekli Tepe was built at the very top of an exposed hill, 3 miles (5 kilometers) from the nearest spring, which makes its prospects as a homestead poor — plus, the site hasn’t yet yielded cooking hearths, trash pits or any of the usual signs that ancient people conducted their daily business there.

It seems Göbekli Tepe was a work in progress for at least a couple thousand years, but from what archaeologists have concluded, the majority of it was built during three main periods. The site itself comprises around 200 limestone pillars, situated in 20 circles, not all of which have yet been excavated. The rings are laid out similarly, with two larger T-shaped pillars in the middle, surrounded by a bench studded with shorter, smaller pillars facing the two stones in the middle. The tallest pillars are 16 feet (4.8 meters) tall, and they weigh between seven and 10 tons (6 and 9 metric tons) each.

The pillars themselves are covered with all manner of engravings, most of which depict animals — but not always the animals you’d necessarily expect. In addition to game animals like gazelles and boars, the pillars of Göbekli Tepe depict foxes, snakes, lions, birds like cranes and vultures, as well as spiders and scorpions — in fact, the pictographs seem to be dominated by animals that wouldn’t have been particularly good to eat. Some of the pillars themselves seem to represent larger-than-life anthropomorphic sculptures: They each have a faceless head, arms, a belt and a loincloth.

“While the early monumentality of the site is definitely impressive, to me it’s the social implications at the doorstep of one of the crucial points in the history of our species is what makes this research so fascinating,” says Notroff.

Around 10 millennium B.C.E. when Göbekli Tepe was first constructed, humans were already starting to build semi-permanent settlements, although they didn’t begin transitioning from hunting and gathering to agriculture and keeping livestock for another couple thousand years. But Göbekli Tepe shows what might be a bridge between two ways of life. Some of the enclosures provide evidence of huge meals, which might mean ritualized feasting took place there.

Although we may never know what really went on at Göbekli Tepe — some people believe it was a human skull cult! — it’s likely that it was a place built and maintained by a hunter-gatherer society to meet up, trade information, exchange goods, find marriage partners, share life hacks and make friends who could help out later in a pinch.

And if they were performing skull cult ceremonies, what better way to build community?

Sports Today – Judging Week 6 overreactions: Are the Steelers the...

Hollywood Today – This Is Us’ Lonnie Chavis Pens Personal Essay on Being a...