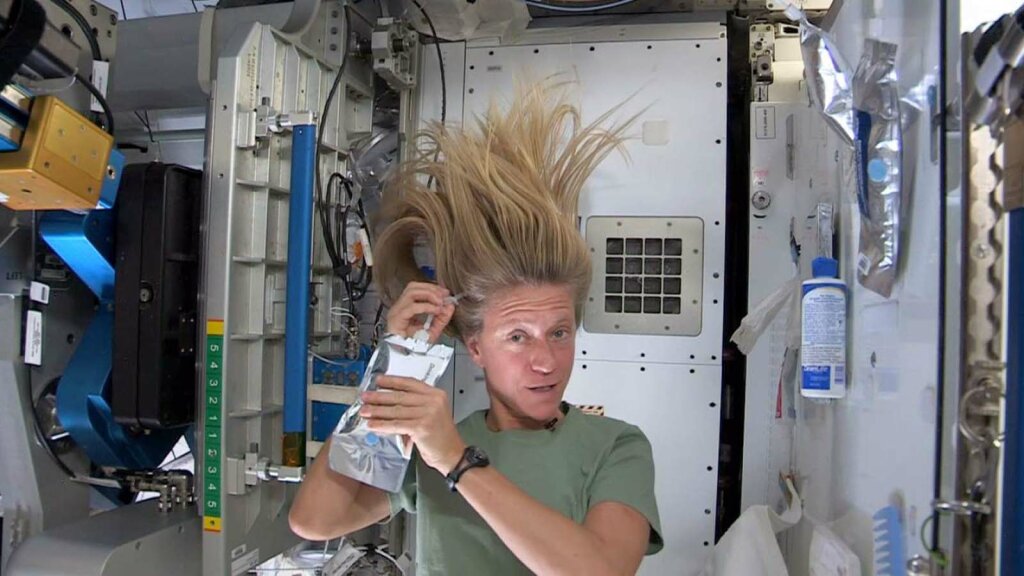 The first thing people usually want to know is how astronauts pee in space. But really, showering is just as hard — if not harder. Think about your own shower and the two things that make it so nice: plenty of hot water and gravity.

It makes sense that hot water would be in short supply in space, but why does gravity matter? Well, without the Earth’s gravity pulling the water down from the showerhead, along your soapy self and down into the drain, there’s just water and suds going everywhere. The gravity on the International Space Station is about 90 percent of the gravity on Earth’s surface (it’s called microgravity), so engineers have had to get clever to keep astronauts clean.

In the earliest days of NASA, astronauts on the Gemini and Apollo missions had very few options. They could take a sponge bath with a towel, soap and water, but water was very limited in those tiny capsules. These guys also didn’t really change their clothes. When astronauts returned to Earth in the 1960s, they were ripe.

When the space station Skylab was in orbit, it had a shower of sorts. Astronauts stepped inside a collapsed tube and strapped their feet in at the “bottom” (top and bottom hardly matter when there’s microgravity). Then they pulled the tube up around them and clipped it in at the “top.” They’d smear liquid soap all over themselves and then rinse it off with a mere 12 cups (2.8 liters) of pressurized water coming through a hose and showerhead inside the tube.

Then they had to dry off with a towel and suction up every single water droplet before it got into the equipment and shorted something out. From start to finish, the process took two hours, so a lot of astronauts skipped it. Again, ripe on their return, but they did have more clothes to change into.

During the space shuttle era, astronauts used the sponge bath system, just like the Gemini and Apollo crews did. But the International Space Station that orbits Earth today has improved the shower situation. All water is supplied in little pouches, and any that gets on their skin just kind of sticks in blobs. To clean up, astronauts use rinseless soap, plus a little water from a pouch and shampoo to get clean.

Just as in Skylab, any water that they use has to be captured with a towel. Any remaining moisture left behind is captured by the Environmental Control and Life Support System and recycled. And we mean any moisture. The International Space Station system reclaims every drop of water, from showering to breathing to peeing, then cleans it and reuses it.