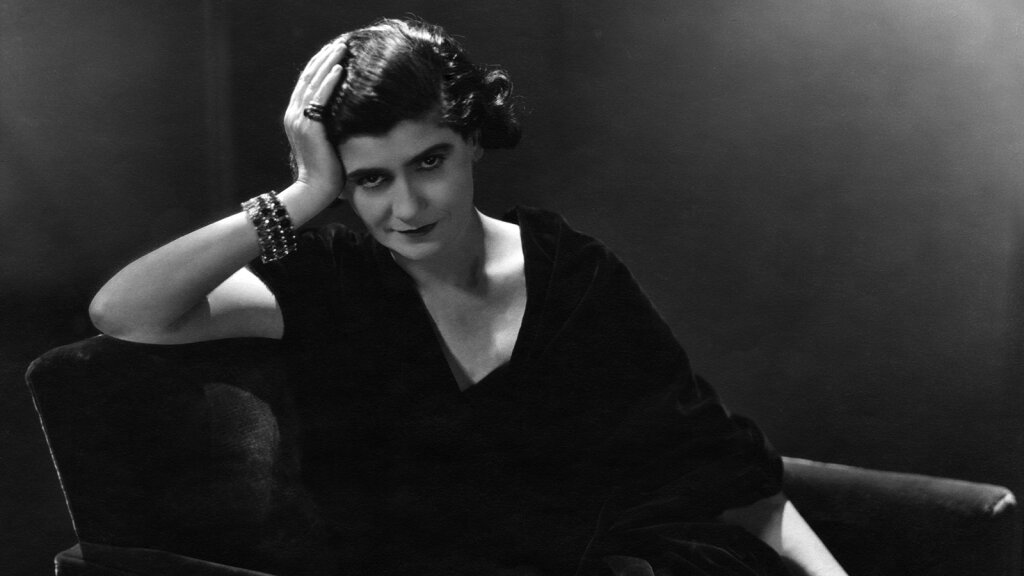 Coco Chanel is an icon for fashion and feminism. She’s credited with designing the little black dress, after all. But hanging beside that LBD in her closet are a few pretty big skeletons, too.

From her early life as a de facto orphan to becoming one of the most recognizable names in fashion, Coco Chanel’s life story is filled with almost as much myth as it is legend. An icon of women’s empowerment, her influence on not just the way that women dress, but also the range of possibilities they can imagine for themselves, is hard to overstate. And with her connection to modernity, it’s hard to believe that she was born in the 19th century.

“Before she was a designer, she was a women’s advocate,” says author and style expert Dr. Courtney Hammonds. Chanel did not necessarily think she was going to be famous, but she knew she had some ideas that were groundbreaking and wanted to prove that women could do anything — and do it even better. “She was a hobnobber,” Hammonds says. “She knew how to finesse the crowd.”

Chanel’s history in fashion began in 1910 when she opened her first shop, and her influence hasn’t ended to this day, despite her death in 1971. That she was always more than a designer is clear, but was she a collaborator, a social climber, a feminist? Let’s separate fact from fiction and look at who Chanel — the woman who pretty much did it all, and did it all with style — really was.

If her image today is one of elegance and sophistication, Chanel’s early life did not offer a portent of what was to come. Born out of wedlock on Aug. 19, 1883, in Saumur, France, Gabrielle Bonheur Chanel was named for one of the nuns who ran the poorhouse where she drew her first breath. Her parents eventually married and in all had six children together. According to authors Isabella Alston and Kathryn Dixon, who wrote the book “Coco Chanel,” the designer tried to have her birth records erased “out of a burning, undying desire to hide her humble upbringing.”

When her mother died in 1895, Chanel’s father took her and her sisters to an orphanage at the Obazine Abbey, a Cistercian monastery in the present town of Aubazine, though interviews with Chanel provide quite a different version of her past — she was known for trying to reinvent a more pleasant childhood. Nevertheless, at the orphanage, she learned to sew, and the aesthetic there has been credited for inspiring her future design preferences.

At the age of 18, Chanel left the abbey orphanage for Notre Dame Finishing School in Moulins as a charity student, according to Alston and Dixon. She developed a relationship with her father’s family, including a close one with her aunt Adrienne, who was roughly her age. Together, Chanel and her aunt began working as seamstress and tailor assistants, meeting men, visiting concert halls and performing cabaret. Apparently Gabrielle got her nickname Coco from one or two of the songs she regularly performed: “Qui qu’a vu Coco?” and “Ko Ko Rik Ko.”

Coco and Her Boy Toys

Her involvement with wealthy and well-connected men served as an initial step to move Chanel from burgeoning cabaret star to successful businesswoman. First, she became the mistress of French socialite and ex-cavalry officer Étienne Balsan, who was also the heir to his family’s fortune. The two lived at his chateau Royallieu where hunting and riding were common activities. At Royallieu, her new hobbies introduced her to equestrian clothing, which she found more suitable to an active lifestyle than typical women’s fashion of the time period.

While living with Balsan, Chanel became acquainted with British playboy and polo player Arthur “Boy” Capel. She began a long affair with him, not completely giving up Balsan, but her infidelity only matched Capel’s.

Interestingly, it was Balsan and Capel who together backed Chanel’s launch into the fashion industry — a field in which she started at the top, literally, with hats.

Although she is famous for clothing like suits and little black dresses, as well as perfume and red lipstick, Chanel began her career in fashion as a milliner. In 1910, she opened a boutique hat shop in Paris and luckily caught the eye of a famous actress. The “actress” referred to may have been Émilienne d’Alençon, an earlier fellow mistress of Balsan.

Chanel’s hats continued to gain in popularity, and within a few years, she had opened a location in Deauville, France, which also carried a casual women’s clothing line of jersey, a revolutionary fabric at a time when some women still wore corsets. Other signature items she was selling included striped boatneck shirts.

During World War I, Chanel opened a third location, this time in the resort town of Biarritz, France, before launching the famed 31 Rue Cambon in Paris in 1919. It is still situated on the same street as the first hat shop. At 31 Rue Cambon, she “invented the concept of the modern boutique,” the website says. The flagship Chanel store remains on the site to this day.

While business thrived, Chanel’s personal life took some hits. Capel married a British socialite in 1918 and was killed in a car accident the following year. But he left Chanel 40,000 pounds, some of which she invested in her business.

By 1921, Chanel introduced her brand’s first perfume, the iconic Chanel No. 5. Made from jasmine, it was named because it was the fifth fragrance she had tested, Hammonds says. And because five happened to be Chanel’s lucky number, the simple name stayed. Created by French parfumier Ernest Beaux, the scent recalls the arctic water of the northern Russian wilderness, according to Alston and Dixon.

“She was one of the first couturiers to launch a perfume,” says Dr. Colleen Hill, curator of costume and accessories, The Museum at FIT. The concept of introducing a perfume speaks to her business savvy and also allows people to buy into the expensive brand, through the perfume, which is affordable.

Many collections — and affairs — later, Chanel continued to be the epitome of a pragmatic, successful businesswoman. Sadly, her connection with British high society, including an affair with the Duke of Westminster, Hugh Richard Arthur Grosvenor, made clear her antisemitism. That, coupled with relationships she held during the Nazi occupation of France, have led to claims that she was a sympathizer or even a spy for the Germans.

Part of the collaboration narrative relies on her liaison with Baron Hans Günther von Dincklage, a German intelligence officer. Hal Vaughan’s 2011 book “Sleeping With the Enemy” seeks to reveal this WWII tale.

Chanel closed her shops during the war and initially went to stay in the Pyrenees Mountains. But she returned to Paris, where she lived at the Ritz-Carlton and networked with Germans and German sympathizers. She may or may not have been involved in a spy mission. Questioned by French authorities in 1944, she was never charged and could even have been protected by her friend Winston Churchill, possibly to “save many members of the British aristocracy from being implicated as Nazi sympathizers should Chanel have to spill all,” according to Alston and Dixon.

After the war, Chanel moved to Switzerland where she stayed for nearly a decade.

Eventually, Chanel re-entered the fashion world. Some experts say it was because of Christian Dior’s “New Look,” which hit the fashion scene in 1947. Rather than freeing women, Dior’s style featured a tight waist, rounded shoulders and a full skirt — and Chanel did not approve. Hammond says in 1954, to contrast this “feminine” style, which had taken over Paris, the 71-year-old Chanel reintroduced a more classic look with elegant appeal.

Her new collection was not met with critical success in Europe, but Americans, who could more easily overlook wartime rumors about the designer, were all in. And whatever critics thought, the public approved in droves. They were buying. Chanel continued to make waves in fashion.

And speaking of Chanel’s lasting contributions to fashion, there have been many. In 1926, Chanel introduced the first “little black dress.” There are multiple stories about how and why she first designed this iconic piece. Chanel claimed that during a gas burner explosion that supposedly singed her hair — and led to her recognizable bob — also threw soot onto her white dress, inspiring the now-classic look. But other rumors say the dress design came from her mourning — or at least took on additional significance — after her lover Capel’s death.

However, Hill says that Chanel did not invent the LBD, she only helped popularize the spare and chic black dress that was wearable in multiple settings. Although an October 1926 issue of American Vogue is cited as evidence of Chanel’s innovation, the dress was part of a full spread featuring additional designers. That Chanel often designed in black has also been noted, as has the dress’ austere nature that may have been similar to what she had worn in convent school.

Another perennial staple, the Chanel suit was introduced to the fashion world after her post-WWII return to Paris. Chanel wanted to create a “uniform” that represented feminism with strong masculine appeal. Despite the Chanel suit’s powerful look, it could never be called unfeminine, Hammonds says.

Made of tweed, the Chanel suits introduced in the 1950s featured multiple design innovations, Hill explains. They provided ways to emphasize modernity and functionality to women’s wardrobes. The jackets had a chain sewn in at the bottom hem to give weight to the fabric and maintain the shape, and the lining was quilted for stability.

Speaking of quilting, it’s is a recognizable style of Chanel products, and the Chanel 2.55 Handbag (named so because it was first offered in February 1955) is a quintessential example. The original rectangular flap bags are quilted leather and feature metal chain straps; the design was inspired by the equestrian spirit Chanel had grown to love. “It’s a real lexicon that Chanel established for her brand,” Hill says.

Chanel worked until she was in her 80s, passing away during the night at her Ritz apartment in Paris. The late Karl Lagerfeld was at the helm for 36 years until his death in 2019. Hill says Lagerfeld maintained the brand’s relevance, honoring Chanel’s characteristics while simultaneously pushing the label forward.

Today, Virgine Viard, who worked with Lagerfeld for more than 30 years, is now creative director. The United States is still the largest market for Chanel, with China coming in second, according to Forbes.

More than a century after it was founded, Chanel remains one of the best-known brands globally, and the legend of the woman likewise endures. Everyone knows her name and can likely name some of her signature designs, Hill says.