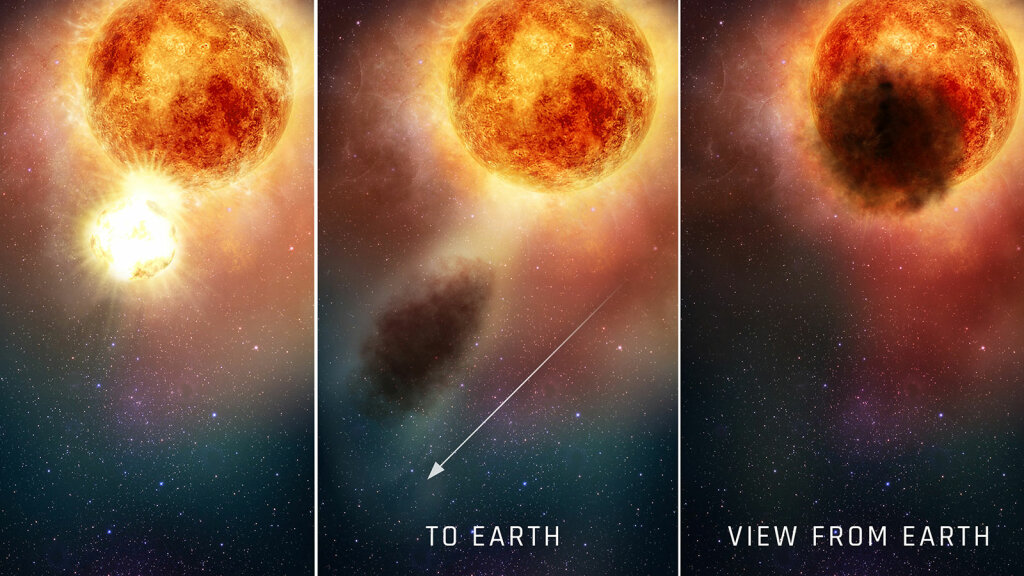 Images of Betelgeuse’s dimming were captured by the Hubble Space Telescope. “Hubble researchers suggest that the dust cloud formed when superhot plasma unleashed from an upwelling of a large convection cell on the star’s surface passed through the hot atmosphere to the colder outer layers, where it cooled and formed dust grains. The resulting dust cloud blocked light from about a quarter of the star’s surface, beginning in late 2019. By April 2020, the star returned to normal brightness,” NASA stated in a press release from August 2020.

But although Betelgeuse’s recent dimming doesn’t seem to incident its imminent death, its end is coming, someday.

“Betelgeuse is going to explode one day as a supernova,” says Howell. “That could happen tomorrow, or it could be in 100,000 years. We can’t tell. But when it does it will be spectacular. It could get about as bright at the quarter moon — so bright you could read by it at night. It will stay really bright for months, and you should even be able to see it in the daytime for about a year.”

Supernovae in the past certainly left profound impressions on humans. Chinese astronomers documented a supernova from the year 1054, and it resulted in the Crab Nebula, one of the more famous bodies in the night sky.

So, does Betelgeuse’s death sound like the blockbuster of the year? Don’t hold your breath. No one knows when the star will finally meet its maker.

“Sadly, we haven’t had a supernova in our galaxy witnessed by humans in more than 400 years,” says Howell. “Just as Galileo was perfecting the telescope in 1604 one [supernova] happened, and he was able to witness it and lecture about it.”

Guinan, too, hopes he’s around to witness what’s sure to be a thrilling spectacle. He says that he’s been carrying out photometry of Betelgeuse for more than 40 years, and he’s continually fascinated in part because it’s so hard to predict what this strange and mysterious star will do next.

“Betelgeuse is a huge unstable star on the verge of becoming a bright supernova,” he says. “Even though the odds of seeing this happen in my lifetime are very, very low. I nevertheless always keep an eye on it — just in case (on a longshot) it goes supernova. I would love to see this.”

If you’ve never seen Betelgeuse, here’s how to find it:

“Just look for three close together equally spaced stars — they are unique in all the sky. That makes up the belt of Orion,” says Howell. “There are four bright stars above and below those forming a rectangle that make up the shoulders and legs of Orion. If you’re in the Northern Hemisphere, the upper left star (which for Orion would be his right shoulder) is Betelgeuse. You can tell because it is red and bright.”