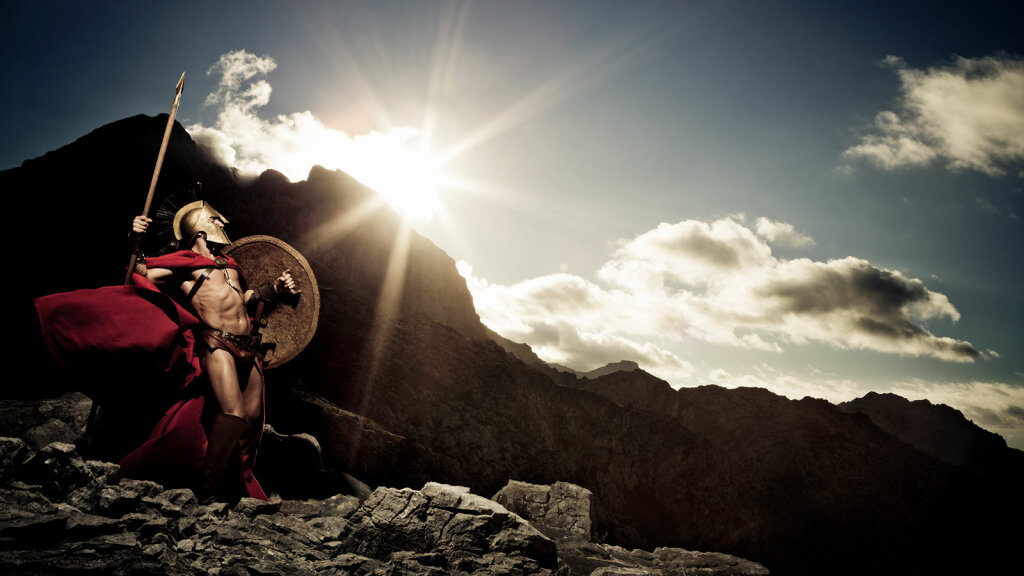 The enduring image of Sparta — that of a brutal and uncultured military state hell-bent on producing the world’s toughest soldiers — doesn’t tell the full story of this Greek city-state that briefly ruled the ancient world in the fifth-century B.C.E.

In fact, says historian and author Nigel Kennell, it’s almost impossible for modern readers to know the “real” Sparta. Everything written about Sparta (and there’s plenty) was penned by outsiders and enemies, particularly Athenians. Incredibly, not a single text written by a Spartan author from the height of Sparta’s power (550 to 350 B.C.E.) has survived the centuries.

“We have lots of people telling us what the Spartans think, but we don’t know what the Spartans themselves believe,” says Kennell, author of “Spartans: A New History.” “So, we have a distorted picture. And people outside Sparta like to use Sparta as a way of working out their own intellectual, philosophical and political prejudices.”

This distorted outsider view of Sparta has created what historians call the “Spartan mirage,” and is responsible for the two opposing myths passed down through history: that Sparta was either a utopian society based on communal harmony and obedience, or a dystopian totalitarian regime. Kennell says that neither one is likely true, or at least we don’t have reliable sources to back up either conclusion.

The only way to really talk about Sparta is to compare it to Athens, its enemy in the Peloponnesian War and the only Greek city-state that wrote its own complete history.

“There were hundreds of Greek cities, but we have nothing from them,” says Kennell. “The only city that we can have a connected, detailed narrative about the internal affairs of is Athens. When you compare Athens to Sparta, they are quite different. But it’s difficult to say how much more different Sparta was from Athens than it would have been from any other Greek city that wasn’t a democracy.”

Citizenship in Sparta Was a Privilege, Not a Right

As Kennell says, one of the biggest differences between Athens and Sparta was that Athens was a democracy, where every citizen (well… free adult males) had the right to vote and to serve in political office. Sparta was ruled by kings — oddly two kings at once, called a “diarchy” — and citizenship was reserved for the Spartiatai, the small segment of freeborn adult males who made the cut.

“Citizenship in Sparta was not so much a right as a privilege, and you could lose it,” says Kennell.

The first requirement for citizenship was passing through the compulsory training system called the Agoge. Quitters were labeled “inferiors” and denied the right to vote or serve in various governing bodies. The second way to lose citizenship was failure to keep up with monthly food and wine contributions to the communal dining halls, where Spartan males continued to eat well into adulthood.

Was Sparta a Military State?

Spartans, like many Greeks, had a militaristic worldview, but Kennell thinks it’s unfair to say that Spartan society was single-mindedly geared toward producing soldiers.

“It’s designed to produce citizens, and in Greek terms, being a warrior is an important part of being a citizen,” says Kennell. “Every able-bodied man fights for his city and draft-dodging is a severe crime, even in Athens.”

While some form of military training was common in Greek city-states, including Athens, Sparta professionalized the role of the soldier. In the Agoge, all freeborn Spartan youth were educated and trained to be life-long soldiers as well as dutiful citizens. Boys lived in groups with a leader, were deliberately underfed to encourage them to steal food and were beaten for disobedience or for being caught stealing.

What’s not true, Kennell insists, is that young Spartan boys were ripped from their families and forced to spend the rest of their lives in military barracks.

“Spartans were very family oriented,” says Kennell. “There is no reliable evidence that Spartan boys were taken away from their families when they were 7 and brought up by themselves in barracks and never had any contact with their families.” The training seems to have taken place on a part-time basis.

In the Agoge, Spartan boys and young men were “educated” in a limited sense, says Kennell. Unlike Athens, where a well-rounded education included philosophy, natural sciences and mathematics, the focus in Sparta was “athletic and quasi-military.”

Greeks believed that athletics and warfare were very closely related, and Spartan youth would have trained and competed in all the standard Greek sporting events: running, wrestling, boxing, throwing the javelin and probably archery.

Later Greek writers also talk about strange contests and high-stakes games played by Spartan youth to prepare them for battle. The Greek historian Xenophon described a game played in the sanctuary of Artemis in which pieces of cheese were placed on the altar and two teams of boys tried to steal them, running through a gauntlet of whips.

“The person who steals the most cheese is the winner,” says Kennell. “It’s a very odd ritual.”

Spartan boys were also famous dancers, Kennell adds. They trained and rehearsed elaborate choral dances that were a “must-see” for visiting writers and dignitaries. Being Sparta, however, the dancing wasn’t purely for artistic expression, but helped Spartan soldiers keep step when they marched and to coordinate advanced maneuvers on the battlefield.

Full-citizen Spartans were essentially life-long soldiers whose loyalty to the state was repaid with freedom from all other labor. So, who did all of the work?

Spartan society was organized like a pyramid with a small group of freeborn Spartans on the top. Below them were the Perioikoi, which means “those who live around.” The kingdom of Sparta was spread out across dozens of smaller towns and villages, and the Perioikoi lived there as skilled artisans making armor, textiles, bronzework and any goods intended for export.

Kennell says that in the seventh and early sixth centuries B.C.E., there was a flowering of culture in Sparta led by the Perioikoi artisans.

“It’s long been acknowledged that the best ivory work in seventh-century Greece is from [Sparta],” says Kennell, “And [Spartan] bronzes are really amazing.”

The big unanswered question for historians like Kennell is why this explosion of creativity ended in the late sixth century when Spartans appeared to deliberately cultivate a reputation for being severe, uneducated and uncultured.

The lowest segment of Spartan society was reserved for the Helots, the slave class that performed all manual labor from agriculture to construction. The name Helot means “the captured” and Kennell believes that many Helots were the former people of neighboring Messenia, which was invaded and defeated by Sparta in the seventh century B.C.E.

The life of a Helot in classical Sparta was more like a medieval serf than an ancient slave, Kennell says. They were “unfree” and unpaid, but they weren’t shackled in chains either. But like any stratified society, those on top felt compelled to routinely establish their dominance by acts of humiliation. In other words, being a Helot was pretty rotten.

Compared to Athens, women in Sparta had many more rights and freedoms. In Athens, the feminine ideal was to neither be seen nor heard. The Athenian statesman Pericles famously said, “The greatest glory of a woman is to be least talked about, whether they are praising you or criticizing you.”

While Athenian women were repressed and Kennell says “oppressed,” Spartan women had the right to own their own land outright and were known throughout Ancient Greece for being outspoken and intelligent, as well as impressive physical specimens.

The best-known of the Spartan women was Gorgo, a queen and the eventual wife of King Leonidas, who died heroically at the battle of Thermopylae with his infamously outnumbered 300 Spartan warriors. As a young girl, Gorgo saved her father’s kingdom by instructing him to refuse a handsome bribe from a foreign official who kept upping the amount.

“Father, your visitor is going to corrupt you if you don’t get up and leave,” said Gorgo according to the Greek historian Herodotus.

“In no other Greek city but Sparta would a female of any age have been allowed to be present, much less heard and heeded, at a meeting between heads of state,” writes the historian Helena Schrader. “Gorgo’s advice was all the more remarkable because it was good… leading some people to quip that it was easier to bamboozle thirty thousand Athenian men than one Spartan girl.”

Spartan girls and young women also competed in athletic events, and to the shock of other Greeks, they sometimes danced publicly in the buff.

“Spartan girls were famous for being sexy,” says Kennell. “They were athletic and they ran around in short tunics with the thigh slashed open called ‘thigh flashers.’ Many a frustrated Athenian male was dreaming about Spartan women.”

Kennell thinks that in some ways winning the Peloponnesian War was the worst thing to happen to Sparta. Lysander, the Spartan naval hero, became the most powerful man in the Greek world, and he forced conquered states to swear allegiance not to Sparta, but to him.

Sparta tried and failed to conquer Persia while Greek city-states grew increasingly frustrated under Spartan rule. In the span of a single lifetime, the Golden Age of Sparta came crashing down.

“[Sparta] didn’t develop any mechanism to run this big empire. They didn’t have the mindset to handle it,” says Kennell. “It was nothing like the Romans, who were very successful at co-opting local elites by dangling goodies in front of them. The Spartans just wanted obedience and people didn’t like to be treated that way.”

Sparta fell to Thebes in the decisive Battle of Leuctra in 371 B.C.E., and the Theban army later invaded Spartan lands and freed the captured realm of Messenia. Without this important agricultural base, Sparta never recovered.

HowStuffWorks earns a small affiliate commission when you purchase through links on our site.

Trending – Are Tom Rodriguez and Carla Abellana willing to get married amid the COVID-19 pandemic?

Trending – John Regala currently confined in a hospital, is yet to undergo more medical tests

Trending – Are Tom Rodriguez and Carla Abellana willing to get...

Trending – John Regala currently confined in a hospital, is yet...

Sports Today – Goodell: NFL ‘wrong’ not to listen to its players

Trending – ‘I WAS DEPRESSED’: Ellen Adarna details ‘dark’ and ‘traumatic’ past in a...