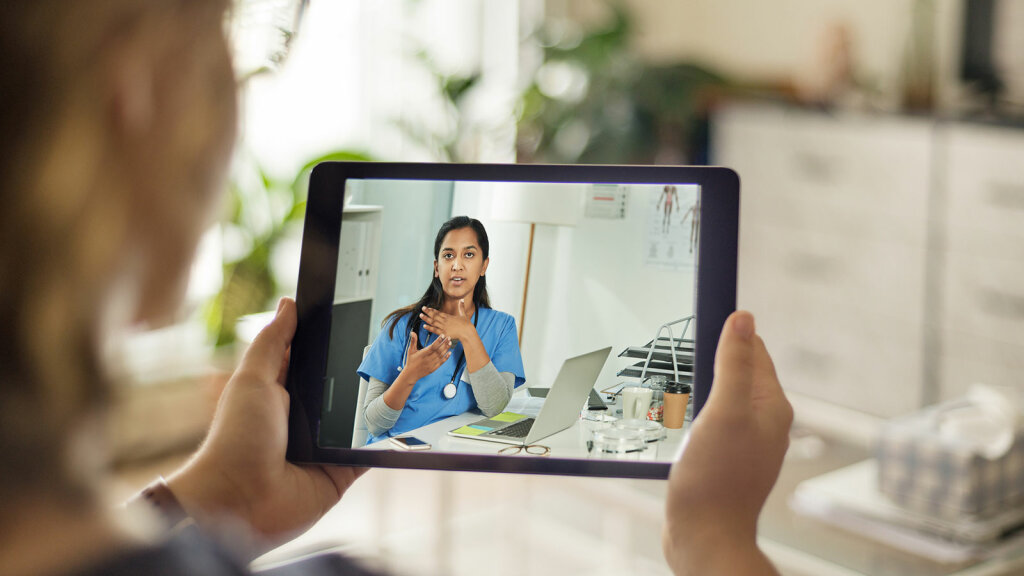 Whether it’s an ordinary emergency (3 a.m. stomach pains) or a very extraordinary situation (COVID-19 exposure, anyone?), there are times when you need to see a doctor but it’s not convenient. Wouldn’t it be great if that doctor could make a house call to you? That may be possible thanks to telemedicine. The appointment is just going to be a little different from what you’re used to, since it’ll take place via a smartphone or computer screen.

Telemedicine is defined by the American Academy of Family Physicians (AAFP) as the practice of using technology to provide health care from a distance. It’s been around since the 1960s, particularly for rural areas looking to contact specialists. But it became more popular after the computer revolution and the widespread availability of broadband starting in the late 1990s, which allowed easier transmission of medical records and video calls.

The 2020 COVID-19 epidemic has marked a significant turning point in the practice of telemedicine. In fact, it figures prominently in the $2 trillion Coronavirus Aid, Relief and Economic Security (CARES) Act, which notes that greater access to virtual health care is a major prong of the effort to defeat COVID-19. This is especially good news for patients in rural communities, veterans, the elderly and others of elevated risk who have traditionally had limited access or limited mobility to see in-person doctors.

“In the COVID-19 epidemic we want to support social distancing,” says Dr. Steven Waldren, vice president and chief medical informatics officer with the AAFP, noting that this is especially critical as there are a lot of people who never show symptoms of the illness, therefore putting others at risk. “An elderly patient with a stable chronic disease that needs to be followed up, typically that would [done] in person, but a lot of physicians are doing that with telemedicine to keep them from going out into the community.”

There are three main types of telemedicine to choose from depending on the need. They are:

Synchronous telemedicine (aka “real-time” telemedicine): Waldren likens this to a Zoom or FaceTime-like call where both doctor and patient encounter the visit at the same time via video or audio chat. This situation is ideal for people generally in good health who need prompt attention for a fixable issue.

Asynchronous telemedicine (“store and forward”): This is when the physician and the patient perform their ends of the encounter at different times. “The patient puts in information and it is packaged and sent to the physician,” Waldren explains. “The physician at some point in time [usually within a couple of hours] would review that information and make a determination of care and send it back.” For instance, the patient (or an imaging center) sends over some medical records to the doctor. This is an extremely convenient option because it works with everyone’s schedule. “The physician doesn’t have to change the workflow significantly and the patient can do it whenever they want,” he says.

Telemonitoring (or “remote patient monitoring”): This type tracks a patient’s vital signs at a distance. For instance, a diabetic could monitor her glucose levels and transmit the data over to her doctor.

Elizabeth (last name withheld) in Atlanta has used the services of telemedicine giant Doctor On Demand on three separate occasions, once taking advantage of the company’s 24/7 policy. “For the flu, it was 3 a.m. and I was sick as a dog in bed,” she recalls. “I was in no shape to leave my house. The doc called in prescriptions for me and my husband was able to pick them up as soon as the pharmacy opened.” The other two instances required prescription antibiotics to treat urinary tract infections (UTI), a common, but painful ailment that needs quick treatment for relief and to prevent spread of the infections to other organs.

In case you’re wondering how a UTI could be diagnosed without a lab test, Doctor on Demand’s website spells it out: “A doctor doesn’t necessarily need a lab sample to make a diagnosis. Your physician may be able determine if you have a UTI based off your symptoms and past history. … In some cases, a doctor may ask that you perform an over-the-counter home UTI test. Sometimes an additional exam can be done to ensure that your UTI has not traveled to your kidneys, and your doctor will be able to give you instructions over video.”

So far, Elizabeth has been impressed with the time-and-cost savings. She paid $40 per visit, but the price varies depending on whether your employer has an agreement with the service or what your insurance plan covers. If you have no insurance, the cost of a medical visit is $75 at Doctor on Demand. (GoodRX has launched a telehealth marketplace with competing companies offering services at a variety of price points.)

Elizabeth says the first and longest appointment was 22 minutes total because she had to set up payment and create an account with the app; the other two visits ranged from seven to 12 minutes. In other words, she was finished in less time than it takes most people to drive to the doctor’s office. She’s also been pleased with the ability to book an appointment quickly. For the 3 a.m. appointment, “I was seen immediately, but even the other day I was able to schedule an appointment within two hours of my request,” she says.

For starters, telemedicine lacks the element of human contact. “The physical exam piece is still challenging,” Waldren says, noting that there’s some cool technology out there to transmit useful data, but most patients don’t have that readily available unless they have known medical issues. However, data from tools such as the Apple watch, which can detect atrial fibrillation, is helpful.

There are ways around the lack of physician contact, though. Even at the typical office appointment many symptoms are self-reported by the patient. “As family physicians and others as well, a lot of times we take the patient’s word for things,” says Waldren. “What the physician is going to do is look at all the information in totality,” he notes, adding that virtual doctors also obtain additional details to make sure the reported data are accurate, for example, that the recording of a temperature was done properly.

Billing has traditionally been something of an issue for telemedicine patients, too. “Sometimes their health plan doesn’t support payment to physicians for providing those services,” Waldren explains. So, it behooves patients to check with their insurance provider before the virtual appointment to make sure it’s covered. Fortunately, the CARES Act has made provisions to alleviate this issue, among them that high-deductible health plans with health savings accounts can cover telehealth services before the deductible has been met.

Then, of course, there’s the matter of technical difficulties. Waldren notes that it can be challenging for some people to get that video connection working, whether due to lack of reliable high-speed internet access, or simply not understanding the technology. The CARES Act also took that into account by removing “real-time audio/visual technology” from the definition of telehealth, so that providers can opt for audio-only visits, if necessary.

And, of course, not every issue can be diagnosed via telemedicine. It can depend both on the specific ailment as well as the provider. “[It’s] really up to the physician and the patient,” Dr. Waldren explains, “A lot of hospitals and clinics will put up a list of things they’ll see patients remotely for.”

So, while your teledoctor can be a nice complement to your health care, you probably still need to forge an in-person relationship with a primary care doctor.

Sports Today – How Brandon Lowe got his swing straightened out...