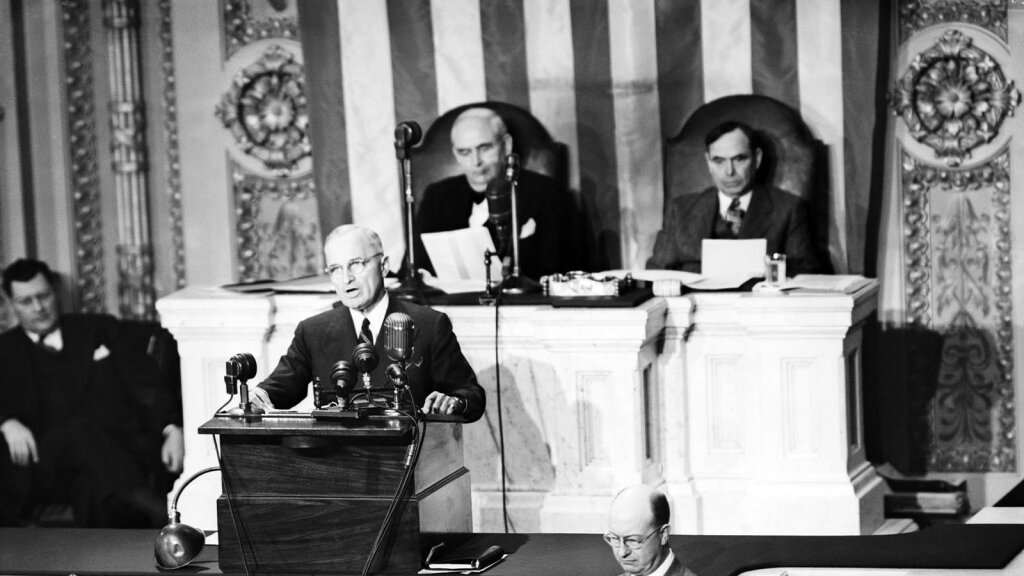 Ever since George Washington and King George started going at it, foreign policy in the United States has been a ticklish affair. Stay out or jump in? Be aggressive or be possessive? Stand on your own or seek help? Lead or follow? Put up walls or call for them to be torn down?

The answers are never easy.

“I believe that it must be the policy of the United States to support free peoples who are resisting attempted subjugation by armed minorities or by outside pressures,” Harry S. Truman, the 33rd president of the U.S., said in a speech to a joint session of congress March 12, 1947, laying out the center beam of what came to be known as the Truman Doctrine. “I believe that we must assist free peoples to work out their own destinies in their own way.”

With the Truman Doctrine, America stepped away from a largely isolationist history, took the lead in battling communism and furthering democracy, and forged relationships with nations — militarily, economically and otherwise — that endure today.

What Is the Truman Doctrine?

Less than two years after the end of World War II, many nations, especially in Europe, were in economic shambles and ripe for exploitation. Two of them, Greece and Turkey, had major problems with insurgents and faced political uncertainty without outside aid.

Even the once-mighty British were mired in the struggles of rebuilding their war-shattered country. They could no longer chip in to help others. So the Greeks and Turks instead turned to the U.S. And Truman, a Democrat, turned to Congress — Republicans held both the House and the Senate — looking for $400 million in foreign aid. (That’s more than $4.6 billion in today’s dollars.)

“There was a key meeting at the White House in late February with congressional leaders, and George Marshall, who was Secretary of State … made a strong pitch, and so did Dean Acheson, who was the Undersecretary of State,” says Sam Rushay, the supervisory archivist at the Harry S. Truman Library & Museum in Independence, Missouri. “They talked about the merits, and the urgency of doing something to help. The British had announced they were going to withdraw, and [Marshall and Acheson] didn’t want there to be a vacuum; that might mean the Soviets would step into that vacuum.”

After Truman’s speech before Congress, a push to pass the Greece-Turkey aid bill was championed by Marshall, Acheson and others. They managed to bring over even staunch isolationists like Sen. Robert A. Taft (R-Ohio), though some influential voices — such as former vice president Henry Wallace and conservative journalist Walter Lippmann — remained opposed. Pitching a new foreign policy initiative, one that went against long-held isolationist tendencies, to a Congress run by the opposition party and a war-weary American public, was a tall order.

“There was a lot of selling to do. And selling it, I think, was the right word,” says Rushay, “to try to sell it to the American people, and to Republicans, and to conservative Southern Democrats, who were very influential, as well; that this was really a good thing, because it was in our interest.”

In the end, the idea that commerce between the U.S., Eastern Europe and the Middle East could be negatively impacted — and that the Soviets could gain more power by stepping in, something that could alter world politics for generations to come — was enough. The Greece-Turkey aid bill passed convincingly, Truman signed the bill in May 1947, and America set out on a new path in Europe and, eventually, other places in the world.

What It Meant, What It Still Means

The journalist Lippmann coined the term “Cold War,” what would become a decadeslong standoff between the U.S. and the Soviet Union that began at the end of World War II. The implementation of the Truman Doctrine was one of its major milestones.

In 1948, the so-called European Recovery Plan — it’s otherwise known as the Marshall Plan — was signed into law, designed to help rebuild Western Europe and further block any communist inroads. Without the new foreign policy outlined in the Truman Doctrine, the Marshall Plan would not have been possible.

In 1949, the U.S. and 11 other nations in North America and Europe, in order to “guarantee the freedom and security of its members through political and military means,” formed the North Atlantic Treaty Organization. NATO, which now boasts 30 member countries, has ever since acted as a deterrent to Soviet and communist expansionism.

Even before the Truman Doctrine became official policy, its theories were in use. As World War II was ending, the Soviets occupied Korea, prompting the U.S. to send troops to the peninsula in a standoff that eventually exploded into the Korean War. Immediately after World War II, the Soviets and the U.S. squared off over Iran, too, and Germany.

In 1954, well after the Truman Doctrine was initiated, president Dwight Eisenhower warned of a “domino” effect if communists prevailed in Southeast Asia, a prelude to the U.S. involvement in Vietnam. Ronald Reagan built upon the Truman Doctrine with the Reagan Doctrine of the 1980s, which not only called for containment of Soviet expansionism but the backing of anti-communists everywhere.

With the breakup of the Soviet Union in 1991, the Cold War ended. But the basic ideas behind the Truman Doctrine — containing communism, championing democracy, helping others internationally — remain important to many modern-day politicians.

“There’s a real ideology behind it. But, fundamentally, Truman saw it in the U.S.’s best interest.”