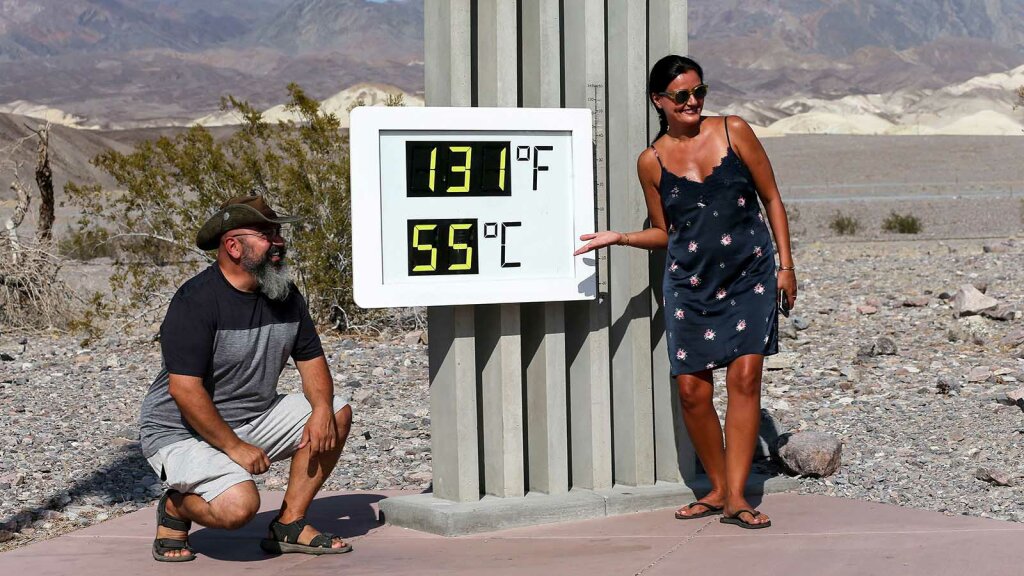 But Death Valley‘s superlatives don’t stop with heat. It’s also the lowest and driest stretch of North America. Its lowest point, Badwater Basin, sits at 282 feet (86 meters) below sea level. (For scale, the maximum technical diving depth is 200 feet (61 meters). The valley also went with zero recorded inches of rain in both 1929 and 1953, and its driest stretch of just 0.64 inches (1.6 centimeters) of rain lasted for 40 months between 1931 and 1934.

Why Is Death Valley So Hot?

This 3.4 million-acre (1.3 million-hectare) park is a rift valley, with landscapes that shift between desert, salt flats, sand dunes and mountains. These landscapes are also responsible for the valley’s unbearable summer heat, which regularly reaches 120 degrees Fahrenheit (48 degrees Celsius). Sparse plants and clear, dry air give the sunlight ample time to heat the desert floor. The heat radiates back and becomes trapped in the deep valley; it rises, then gets trapped by Death Valley’s mountainous border. The hot air then descends and becomes even more heated by the low elevation cycle.

The temperatures may sound torturous, but Death Valley is much more than Mother Nature’s oven. The massive park — the largest national park south of Alaska — attracted 1.7 million visitors in 2019 alone. And for good reason. Here are five fascinating things the high-heat headlines don’t tell you about this mind-blowing natural wonder.

Sunrises and sunsets paint this desert all sorts of warm hues, but Death Valley’s colors go beyond dawn and dusk. Artist’s Drive, a 9-mile (14.4-kilometer) stretch of mountains so colorful they look spray-painted, is the result of Death Valley’s wild and wonderful geology. Pink, purple, teal and blue hues are the result of the oxidation of metals in the valley’s Black Mountains. These colors, most apparent on the “Artist’s Palette” stretch of the Black Mountains, are more than a pretty picture; they’re also proof of Death Valley’s violent volcanic history.

2. Stargazing Here Is Out of This World

Crisp, clear nights and virtually no light pollution are among the reasons Death Valley attracts stargazers in droves. According to Rachel Urban, founder of Bindlestiff Tours, which runs small-group Death Valley adventures, this is one of the park’s most captivating features.

“Death Valley is a [certified] Dark Sky park,” Urban says in an email. “It’s far enough away from any light pollution — yes, even Las Vegas — to be an astronomer’s paradise. Pick the right night and the Milky Way is clearly visible.”

3. Death Valley Is as Science Fiction as It Gets

Death Valley’s landscapes alone look like the backdrop of a science-fiction movie — that’s probably why Star Wars producers filmed parts of “Episode IV” and “Episode VI” here. But its surreal geological features go beyond the big screen. At Eureka Dunes, a 3-mile-long (4.8-kilometer) stretch of California’s tallest sand dunes, the sands can actually sing. According to the National Park Service, when the sand avalanches down the tallest dune, you can hear sounds that mirror pipe organs or airplane drones — but it’s really just the sand.

Adding more eerie movement to the mix, some rocks in Death Valley Racetrack Playa travel on their own. When rocks from nearby mountains tumble down into the Racetrack — a dry lake in northwest Death Valley — the rocks move across the surface leaving tracks as they go. According to the NPS, some rocks have traveled up to 1,500 feet (457 meters). Known as “sailing stones,” these are not pebbles; they range in size from just a few ounces to hundreds of pounds. The phenomenon happens when adequate water and ice form in the playa, ultimately floating the rock across the muddy bottom with the help of a light breeze, according to Live Science.

With the name Death Valley, it’s hard to imagine any life thriving here — but it does, and there’s quite a lot of it. Death Valley is home to more than 1,000 species of plants and more than 50 mammals, including bighorn sheep, jackrabbits and coyote. Birds like the roadrunner live here year-round, and one unusual species, the tiny iridescent blue Devils Hole Pupfish, also call the 93-degree Fahrenheit (33-degree Celsius) waters of Devils Hole (a detached geologic formation just outside the national park) home.

5. Safety Is a Must When Visiting Death Valley

Urban recommends visiting Death Valley between November and April; this is when the heat settles down, and temperatures hover around 75 degrees Fahrenheit (23.8 degrees Celsius) in November and 65 degrees Fahrenheit (18.3 degrees Celsius) in December. She also urges Death Valley travelers to take precautions seriously. It’s easy to get lost in this massive park.

“Don’t rely on your GPS, because the mountain ranges make it unreliable. Signal is often lost, and this includes cellphone service,” she says. “Take maps and know where you’re going. If you’re traveling in the hottest months of the year, take plenty of water, a pop-up shade, electrolytes and salty snacks.”