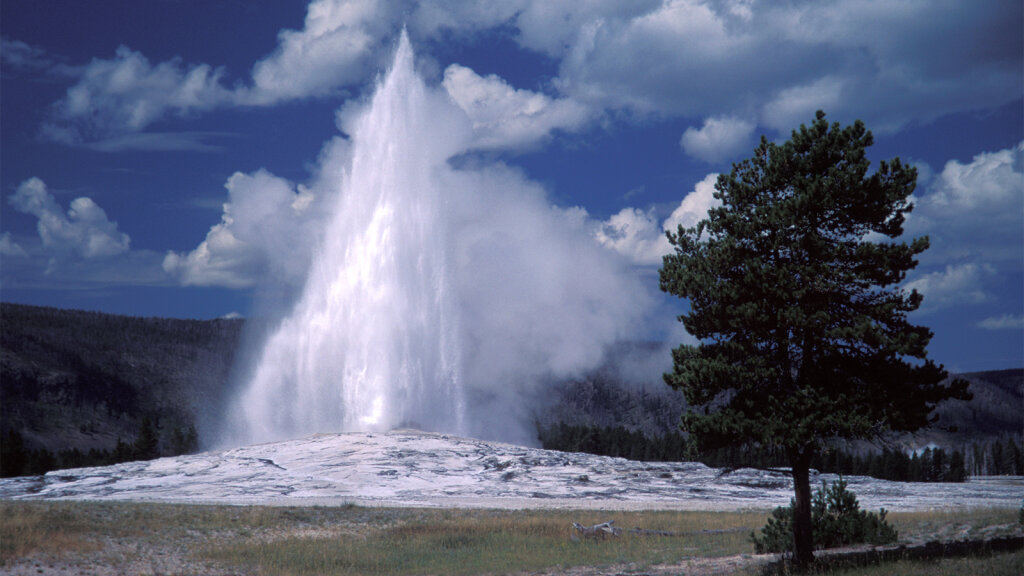 Old Faithful used to have a less-than-modest nickname: “Eternity’s Timepiece.” Since at least the American Gilded Age (1860s-1900), this Wyoming cone geyser has wowed spectators with its predictable eruptions. You can see the landmark for yourself at the head of the Upper Geyser Basin in Yellowstone National Park, home to around 4,500 bison, 714 bears and over 500 geysers.

Named Old Faithful in 1870 by the Washburn-Langford-Doane Expedition because it seemed to spout “faithfully” every 63 to 70 minutes, no geothermal attraction — in Yellowstone or elsewhere — gets more fanfare than Old Faithful. Visited by presidents and immortalized by artists, the geyser spouts about 17 times a day. Countdown clocks tell gathering tourists when to ready their cameras for the next waterworks show. You see there’s a simple formula rangers use to estimate how much time will likely elapse between any two eruptions of Old Faithful.

“About 90 percent of [these] eruption predictions are accurate within a window of plus or minus 10 minutes,” according to the National Park Service website.

That’s a solid track record, but Old Faithful still isn’t something you’d want to set your watch by. Five decades of observation have revealed that the geyser is changing.

Since 1959, the average interval between Old Faithful’s eruptions has gotten longer. And yet most of the actual eruptions which occurred back then were rather brief. This is no longer the case.

Sin-Mei Wu is a geologist at the University of Utah who’s studied the physics of geysers and related structures.

“Geysers are rare because they require very unique geologic conditions: a persistent heat source … abundant water supply from groundwater systems and a porous/fractured medium that allows fluid migration and heat transfer within,” he tells us via email.

Usually the heat comes from magma, liquid or semi-liquid rock found below the Earth’s crust which is called “lava” when it bursts onto the surface.

Yellowstone is positioned over two magma chambers — including a nice long one that’s just 3 to 10 miles (5 to 17 kilometers) underground. Their maker was a localized swell of abnormally hot material beneath the crust. Classified as a “mantle plume,” it’s the reason why Yellowstone has the world’s largest geyser collection.

The chambers warm up subterranean reservoirs of liquid groundwater. Although the physics here aren’t entirely settled, we do know that some of this water gets superheated. That means its temperature climbs above and beyond H2O’s normal boiling point.

Since this water is held in tight corridors, it’s got nowhere else to go — at first. Bearing down on the superheated liquid is a combination of overhanging rock and colder water. Add cramped quarters to the mix and you’ve got a recipe for high pressure.

But the pressure doesn’t last forever. In a geyser like Old Faithful, hyperactive steam bubbles eventually push a small percentage of the groundwater through a narrow opening at the surface. Just like that, the pressure decreases and sets off an explosion of hot water and steam.

If you’re wise, you’ll give Old Faithful a wide berth. Visitors can safely watch the geyser erupt from a boardwalk maintained by Yellowstone. Venture off that path and you might be on the hook for six months in prison and a $5,000 fine. Besides, getting too close to hydrothermal features like geysers or hot springs might have fatal consequences.

When Old Faithful goes off, the water temperature around its vent can hit 204 degrees F (95.6 degrees C). Meanwhile the steam gets even hotter, sometimes exceeding 350 degrees F (176.6 degrees C).

Viewed from an appropriate distance, Old Faithful’s eruptions are thrilling spectacles. Even if you’ve seen one before, you might want to revisit the geyser someday. Because certain eruptions last longer than others do.

“We think of Old Faithful [as] a predictable geyser, but it is not as regular as it seemed,” says Wu. He tells us it has a “bimodal eruption interval.” The gaps between its spouting sessions fall into two distinctive categories. So do the eruptions themselves.

An eruption that begins and ends in under 2.5 minutes is considered “short.” By the same token, “long” eruptions eat up more time.

Wu explains it like this: After a short eruption, there’ll be an intermission of 60 to 65 minutes before the geyser spouts again. Yet Old Faithful will reliably take a break of “around 92 minutes” once a long eruption subsides.

Over the past 50 years, long eruptions at Old Faithful have become the norm. Short ones still occur — but they’re rarer than they used to be. “We don’t know exactly what’s the cause,” Wu notes. While the mystery is unresolved, some geologists blame recent earthquakes for this changing schedule.

The geyser’s source is another riddle. Scientists haven’t determined where Old Faithful gets its water supply — but in a 2017 study, Wu and five colleagues revealed an important clue. Using seismic wave sensors, they found a natural reservoir below the historic Old Faithful Inn which stands southwest of the geyser.

“That body is interpreted to be a highly fractured and saturated area that we think provides fluids as a source to Old Faithful,” he says.

Plumbing questions and bimodal eruptions aside, Old Faithful is indeed more “faithful” than some of its counterparts. It’s high time we introduced the Steamboat Geyser, another Yellowstone resident that happens to be the world’s tallest active geyser, emitting 300 to 400-foot (91 to 122-meter) H2O jets into the sky above.

But there’s a catch. “It is very unpredictable and has gone decades between eruptions,” says Wu. “The last eruption before March 2018 was in September 2014.” However, the 2018 blow-up “began an unprecedented active phase … [The Steamboat geyser] has erupted a total of 85 times since then with the last eruption occurring February 21 of this year [2020].”

“We still don’t know what initiates this active phase, what controls its eruptive behavior, and what [the geometry looks like],” Wu adds.

So, keep an eye on the headlines. Perhaps we’ll see some (ahem) heated arguments about these topics in the near future.

Hollywood Today – Where Sofia Richie and Scott Disick Really Stand as He Vacations...