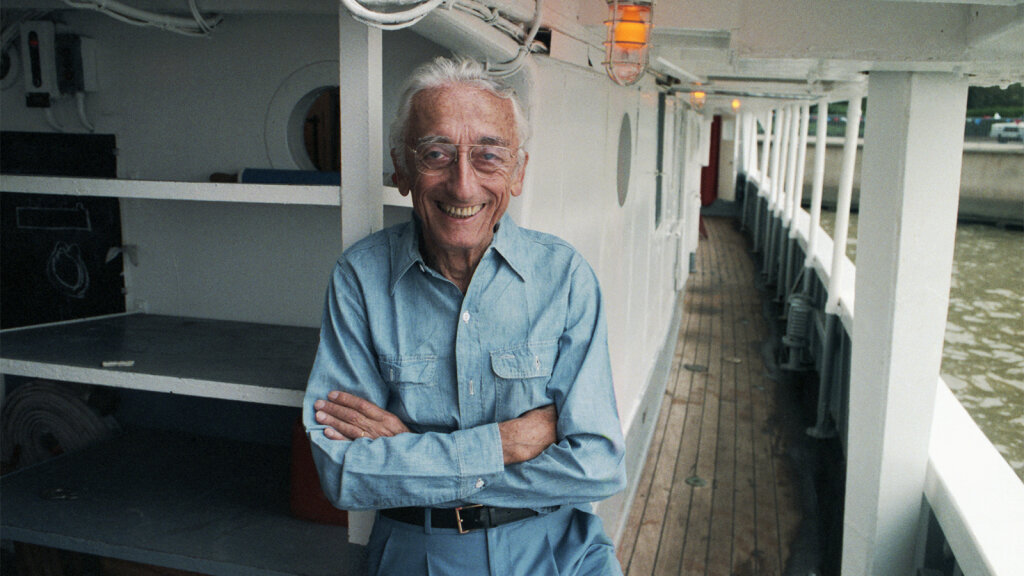 Cousteau originally became interested in ocean exploration at a young age. After surviving a near-fatal car accident that broke both his arms, he started swimming in the Mediterranean Sea as a form of physical rehabilitation. The problem? He was frustrated by the limited amount of time he could spend submerged under the surface. In 1943, Cousteau met a French engineer named Emile Gagnan. After some experimentation with compressed air cylinders, the duo developed the first Aqua-Lung device, intended to help divers stay underwater for long periods. For modern divers, this early invention is now known as a diving regulator, or demand valve, and it’s a crucial tool in scuba. But he also helped invent other types of underwater gadgets, including many of the lighting systems and waterproof cameras that are still in use today.

“He was not only an explorer, but an inventor and an activist for nature, a rare combination,” Yaccarino says.

He Was a Prolific Filmmaker, Documentarian and Writer

In addition to “The Undersea World of Jacques Cousteau,” the explorer co-produced several documentaries with his son Philippe (until Philippe’s death in a plane crash in 1979). He also co-wrote the book “The Silent World” with Frédéric Dumas in 1953, and released his first color movie documentary of the same name three years later. His other feature films included “World Without Sun” and “Voyage to the Edge of the World,” and according to the Cousteau Society, he helped create 115 television films and 50 other books.

“One of my favorite things about Jacques Cousteau is that he realized that a big part of his job was to make us all love the creatures of the sea,” Berne says. “He understood how important it was for people to protect and conserve the oceans and all the lifeforms that live there. In his own words, ‘People protect what they love.’ So, isn’t it great that loving was part of his strategy to protect our planet!”

Before Cousteau, very little was known about the nocturnal, deep sea creature called the nautilus. Cousteau was the first to capture actual footage of the nautilus swimming in the deep ocean. He also pioneered research into the communication systems used by dolphins and was among the first to document their use of sonar. And one of his most important accomplishments was his work in helping to get a moratorium on commercial whaling passed by the International Whaling Commission in 1986.

He Was a Big Fan of Children

Cousteau himself was a father to four children (sons Jean-Michel and Phillipe, who both joined their dad in underwater world expeditions, daughter Diane and son Pierre-Yves). But beyond being a doting dad, he was inspired by the inquisitive nature of children.

“Jacques Cousteau loved children,” Berne says. “He especially loved kids because of the freedom with which they express themselves, their creative and curious minds, and their sense of wonder. These, of course, were the same traits that drove Cousteau to keep wanting to know more, to explore and discover more, for his entire life. He also realized how important children were, because the future of our planet rests in their hands.”

As Cousteau began making a name for himself, he crossed paths with Irish millionaire Thomas Loel Guinness, a politician and descendant of Arthur Guinness, the founder of Guinness brewery. Sharing Cousteau’s passion for the ocean, Guinness lent the explorer a 40-year-old former car ferry for just one franc per year. That ship became known as Calypso, the ship National Geographic says would “become nearly synonymous with the Cousteau name and legendary as a platform for marine adventure and exploration.”

Hollywood Today – What Happened to 13 Reasons Why?