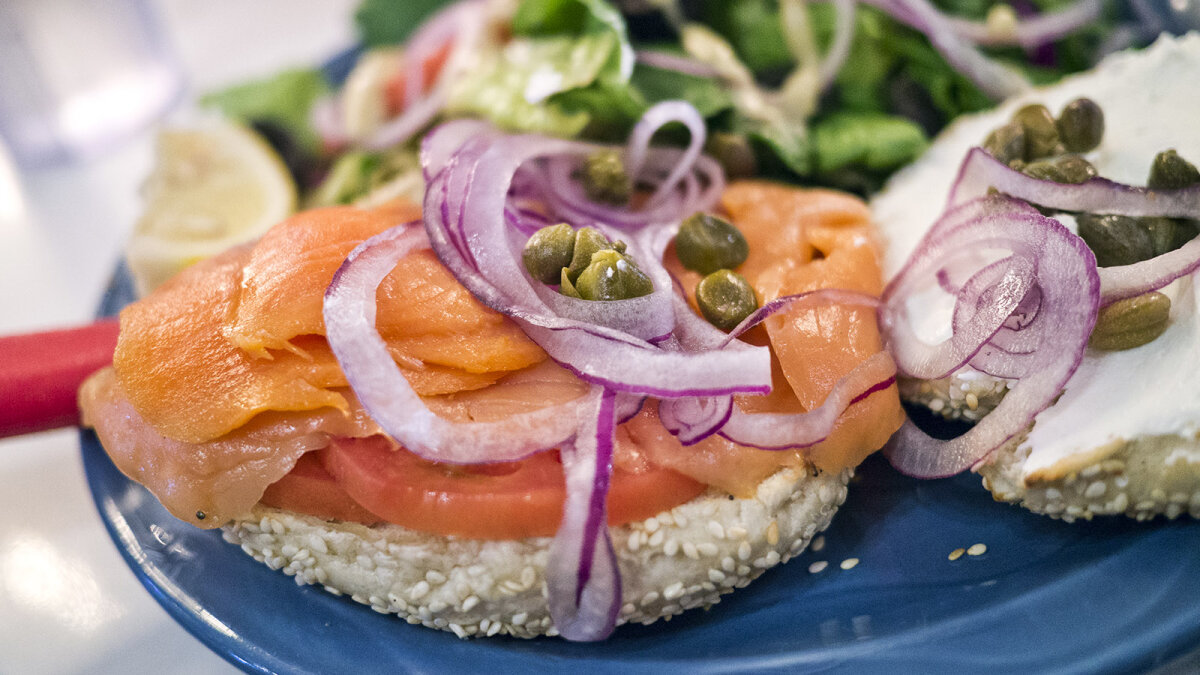 Americans love their salmon. In 2017, the rich, flaky fish topped the list of the country’s favorite seafood, according to the National Oceanic and Atmospheric Association’s annual Fisheries of the United States report. And salmon also had the highest U.S. commercial value, raking in $688 million. That’s more than crab ($610 million), lobster ($594 million), shrimp ($531 million) and scallops ($512 million).

Salmon also has some pretty amazing health benefits. It’s loaded with omega-3 fatty acids, rich in other nutrients like vitamin D and selenium, and it’s high in protein and low in saturated fat. It’s also simple to prepare: You can grill it, bake it, poach it, pan fry it, and of course smoke and cure it.

And when you’re at the seafood or deli counter, you’ll likely find lox, nova and gravlax but the hardest part is knowing which you want to order. What is the difference between these three salmon preparations anyway?

“These are all born from a need to preserve things, so they are all pickled,” executive chef Eric Sell of Osteria Mattone in Roswell, Georgia, explains. “No one in America wants to eat ‘pickled fish’. The art of preserving is not lost, but not a necessity, either. Hence no one knows what to call which type of cured fish what.”

Let’s start with lox. From the Yiddish word for salmon — laks — lox is a cured (not smoked) preparation often made with the fatty belly of the fish. Lox is salt cured, which means the salt mixture (usually a combination of salt, sugar, herbs, spices and citrus zest) draws out the fish’s moisture. The fish takes on the flavor of the cure, so it often has a salty flavor.

Lox is often served atop bagels with cream cheese, red onion and capers. Today, however, many people use the term lox interchangeably for other types of salmon preparations. “It is a term that is used very loosely in our culture,” says chef Jon Schwenk of C&S Seafood & Oyster Bar in Atlanta. “If you want the belly, it is called belly lox and brings a higher price because of the higher fat content.”

Gravlax is similar to lox in that it’s not smoked and is cured only. The traditional Scandinavian method get its flavor from its cure of just salt, sugar and lots of dill, although additional spices, such as citrus, coriander, juniper berries or fennel can be added. Some people even add spirits like vodka or the Scandinavian spirit aquavit.

Gravlax is usually served whole as an appetizer. It’s always sliced thin and often comes with a side of dill and mustard sauce and with crispy bread or crackers.

The biggest difference between nova and lox and gravlax is nova is smoked. The name nova refers to the fish coming from Nova Scotia, but not all smoked salmon is nova. Nova is cold smoked, which means it’s smoked over very low heat (usually about 80 degrees Fahrenheit [26 degrees Celsius]) to give it that smoky flavor. But because the temperature is so low, the smoking process does not cook the salmon, it must be cured or brined first.

It may sound complicated, but you can actually make nova at home just as easily as lox or gravlax if you are willing to put in the time. Nova and other smoked salmons are best served up on a platter sliced thin with capers, hard-boiled eggs, cucumbers, red onions and spreadable cheeses, with crackers and a sliced baguette.

Sports Today – ‘I have earned the right to be sitting here’: Jennifer Brady’s...

Hacked! – How to Put Chains On Tires