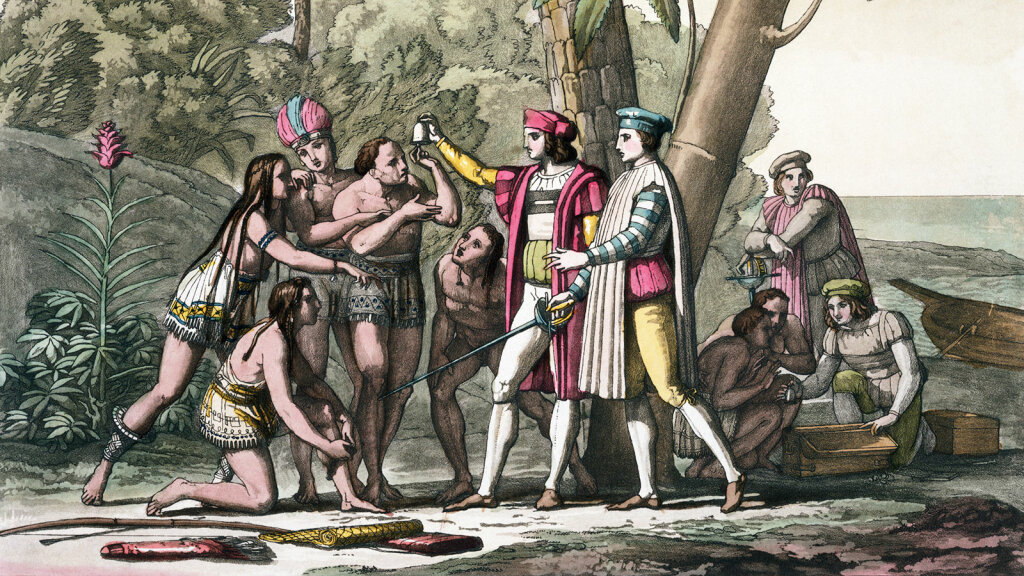 More than 500 years after stepping ashore on the Caribbean island of Hispaniola, Christopher Columbus is a divisive figure in the New World he opened to European explorers and settlers. On Oct. 14, as many Americans celebrate Columbus Day with a fall cookout or big sales at the mall, others will observe Indigenous Peoples’ Day, a holiday born of protest against a historical icon now accused of genocide.

At least eight states — Vermont, North Carolina, Alaska, South Dakota, Oregon, Minnesota, Maine and New Mexico — plus the District of Columbia and more than 130 cities across the United States that have repealed Columbus Day over the tainted legacy of the 15th-century explorer.

Columbus was once universally revered as a hero, the brave navigator from Genoa, Italy, who defied critics to seek out a western passage to India. Sure, he miscalculated the distance from Spain to India by nearly 8,000 nautical miles (14,000 kilometers), but he stumbled onto two entirely new continents in the process. And no, Columbus never actually stepped foot in North America, but most Americans still saw him as the nation’s de facto discoverer.

When Columbus Met the Taíno …

But then a new image of Columbus began to emerge. From his journals, we learn that when Columbus first met the peaceful indigenous Taíno people of the Caribbean islands, whom he described as “very well made, with very handsome bodies, and very good countenances” who didn’t “carry nor know anything of arms,” his first thought was to enslave them. “They would make good servants… With fifty men they can all be subjugated and made to do what is required of them,” Columbus wrote.

On Columbus’ second voyage to the Americas, he rounded up 1,500 native Arawak Indians (Taíno is an Arawak subgroup) — men, women and children — and held them in pens while his ships prepared to sail back to Spain. He chose 500 of the best specimens to be taken to Europe and sold as slaves. Two hundred Arawak died on the journey.

An even worse fate awaited those who weren’t shipped off as slaves. Through a combination of forced labor in Spanish colonies and European diseases like smallpox, the native populations of the Bahamas and Hispaniola were virtually wiped out within decades of Columbus’ arrival.

“Columbus didn’t come over in the spirit of scientific inquiry and cultural sensitivity,” says Carrie Gibson, historian and author of “Empire’s Crossroads: A History of the Caribbean from Columbus to the Present Day.” “First, he was mistaken in his navigation. Second, he was looking for gold and for people to enslave. When you realize that, it’s very hard to still hold him up as a positive symbol. It makes a lot of sense that some people are pushing back against Columbus Day.”

The movement to replace Columbus Day with Indigenous Peoples’ Day started back in 1977 at a United Nations International Conference on Discrimination against Indigenous Populations. Instead of celebrating Columbus’ arrival as the foundation of the Americas, participants proposed an alternative holiday that would recognize that native peoples had inhabited these lands for millennia.

Berkeley, California was the first city to officially switch to Indigenous Peoples’ Day in 1992, although South Dakota had already ditched Columbus Day for “Native Americans’ Day” back in 1990. Since then, more cities and states have distanced themselves from Columbus’ messy legacy and embraced a new holiday that, in the words of Maine’s proclamation, celebrates the “historic, cultural and contemporary significance of the indigenous peoples of the lands that later became known as the Americas.”

The Rise and Fall of Columbus Day

The anti-Columbus Day movement has its detractors, though. Some believe it’s a case of political correctness run wild, while others allege that repealing Columbus Day would be an affront to another ethnic group: Italian-Americans.

“When Columbus Day was founded in 1937, the federal holiday provided a sense of dignity and self worth in light of the hostility and discrimination many Italian immigrants, Italians Americans, and Catholics (more broadly) faced,” writes the National Italian American Foundation in a statement. “Less than five decades before the holiday’s establishment, 11 Italians were lynched in New Orleans, the biggest mass lynching in U.S. history.”

An estimated 4 million Italian immigrants came to America between 1880 and 1920, mostly peasant farmers fleeing desperate poverty in their home country. Italian immigrants faced terrible discrimination and outright violence, and early Italian-American civic groups latched on to the Genovese-born Columbus as a symbol of pride connecting Italians to the broader American experience. “In our view, it is unfair to apply today’s political norms on a historical figure from 500 years ago,” notes the NIAF.

The first Columbus Day celebration was in 1792 to commemorate the 300th anniversary of Columbus’ first voyage to America. In San Francisco, Italian communities started celebrating an annual Columbus Day as early as 1869. Following the horrific 1891 lynching cited in the NIAF statement, President Benjamin Harrison called for a “general holiday” in 1892 — the 400th anniversary of Columbus’s landing — and proclaimed Columbus a “pioneer of progress and enlightenment.”

At the urging of the Knights of Columbus, President Franklin D. Roosevelt made Columbus Day an official federal holiday in 1937 and the holiday has since become a day for Italian-Americans to celebrate their heritage through community festivals and parades. Given the painful history that led to the founding of Columbus Day, groups like the NIAF are some of the staunchest opponents of state and national efforts to erase it from the calendar.

“We believe that to repeal Columbus Day as a federal holiday, which is celebrated by over 20 million Italian Americans, only to replace it by another holiday celebrated by another ethnic group, would be culturally insensitive,” writes the NIAF. The group says it does not oppose Indigenous Peoples’ Day as long as it is held on another day beside Columbus Day.

Gibson, the historian, doesn’t have an easy answer for solving the Columbus Day controversy, but encourages deeper reflection on the long, complicated history of the lands and people we call American.

“The minute Columbus arrived in Hispaniola, everything changed,” says Gibson. “We’re still having discussions about how it changed and historians are still dealing with the legacy of that initial encounter.”

Hollywood Today – Noah Purvis Reveals the Real Reason He Was Suddenly “Eliminated” from...