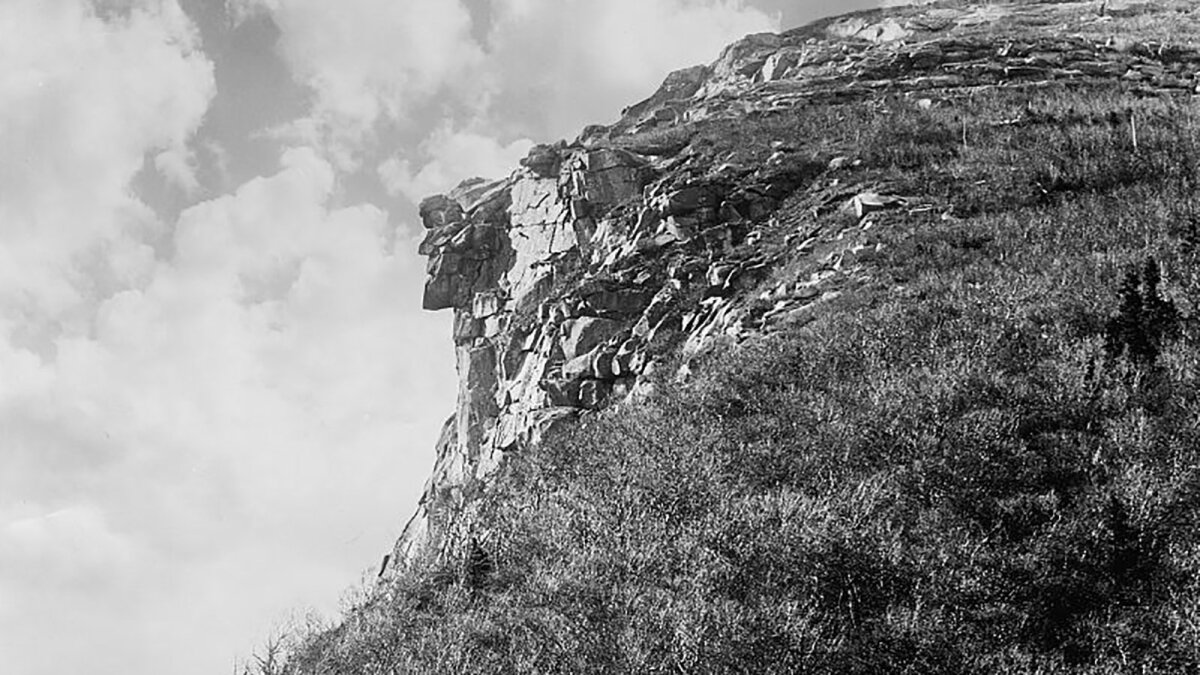 A common term most first-year psychology students learn is “apophenia” — the human tendency to perceive meaningful patterns in random things, like objects or ideas. There are plenty of ways we see apophenia play out in the real world. Take mimetoliths.

“A mimetolith is a natural rock feature that resembles a living form in nature — usually a face a human head, or animal,” geologist Sharon Hill, owner of SpookyGeology.com writes via email. “The word was coined by Thomas Orzo MacAdoo but first appeared in print from R. V. Dietrich in 1989. The term is derived from the Greek words mimetes (an imitator) and lithos (stone).”

According to Hill, mimetoliths have sort of a Magic Eye quality about them — you know them when you see them, but not everyone sees them right away. “It is striking and invokes powerful feelings,” she says. “Humans readily recognize patterns, particularly faces and human forms, in the sky and landscape. Our brains are programmed to do this. So there are many notable features around the world that appear to resemble faces or heads. We tend to ascribe significant meaning to what is just a natural formation and bestow special values to these features no matter if they are tiny or huge.”

Hill says mimetoliths are often linked to everything from cultural traditions to conspiracy theories. “Familiar figures emerging from solid rock must have been a powerful symbol to early people that supernatural agencies had a hand in the formation of the Earth,” she says. “Most of these features are associated with folklore about the creation of the land or an ancient time when the world was enchanted. It makes us feel that it is enchanted, still.”

One fascinating fact to keep in mind about mimetoliths is that in many ways, they’re fleeting. “The most famous mimetoliths in the world at any time are truly temporary and ever-changing,” Hill says. “Gravity, ice, water and wind will eat away at rock.”

So, to celebrate these ephemeral natural wonders, take a look at these four famous mimetoliths and see if you can find the features many have said make them special.

1. Old Man of the Mountain

In Hill’s opinion, the Old Man of the Mountain in the White Mountains of New Hampshire was very likely the most famous mimetolith to exist. “Also known as the Great Stone Face, this profile feature was first noticed by an 1805 survey crew at Cannon Mountain in the Franconia Notch. Formed in Conway granite that is about 169 million years old, the face feature was 45 feet (13.7 meters) tall, 30 feet (9.1 meters) wide, and was 1,214 feet (370 meters) above the flat ground.”

Hill says that In 1850, Nathaniel Hawthorn’s short story, “The Great Stone Face“, truly made the site famous, but over time, glacial erosion and weathering faded the nuances of the face that were actually made up of cliff ledges when viewed from the north at certain angles.

“With the common freeze/thaw erosion that happens in New Hampshire, there was always concern about its inevitable collapse and there were attempts to preserve it, notably rods emplaced in 1915, cracks sealed in 1937, and turnbuckles and strain gages installed at intervals,” Hill says.

“The face became the New Hampshire state emblem in 1945. Sadly, it collapsed on a wet and windy night in 2003. The forces that created it had also worked towards its demise. Nothing could have been done with the available technology,” says Hill.

2. The Grey Man of Merrick

At the base of Scotland’s Merrick mountain in Galloway Forest Park is the Grey Man of Merrick, a “mimetolith within a mimetolith” because Merrick itself serves as the index finger in the Range of the Awful Hand, a range of hills in the Galloway Hills range, part of the Southern Uplands of Scotland.

The range of five hills are named because of their resemblance to the fingers of a hand when viewed from above or on a map.

The outcrop is on the southeast side of Merrick, the highest hill in Dumfries and Galloway in Scotland and, although the old man’s face can be seen from both sides, the trek to get there is reportedly quite arduous.

“A very temporary mimetolith was the ultra-infamous Face on Mars, a photo taken by the NASA Mars Viking I in 1976,” Hill says. “We saw the ‘pattern’ of a face because of the lack of resolution in the features.

“Even though one side was in shadow, our brains filled in the gap! The strangeness was “resolved” in 2001. Yet, some people retain their belief in the mysterious face because the initial meaning was so powerful. This example showed that mimetoliths are most certainly dependent on the eye of the beholder,” she says.

According to NASA: “And so on April 5, 1998, when Mars Global Surveyor flew over Cydonia for the first time, Michael Malin and his Mars Orbiter Camera (MOC) team snapped a picture ten times sharper than the original Viking photos. Thousands of anxious web surfers were waiting when the image first appeared on a JPL web site, revealing … a natural landform. There was no alien monument after all.”

Located at the mushroom rock formation in Taiwan’s Yehliu Geopark is the Queen’s Head, one of several rocks around the world that are — according to some sources — said to resemble the bust of Nefertiti, and — according to others — the head of England’s Queen Elizabeth I from some angles.

The iconic but debatable silhouette formed sometime between 1962 and 1963, and because weathering has caused the neck of the rock to slim over the years, plans are currently underway to reinforce the formation. According to BBC, “One idea to encase the Queen’s Head in a glass box was rejected as waves from typhoons would likely rip it off its foundations, causing catastrophic damage to the formation.”