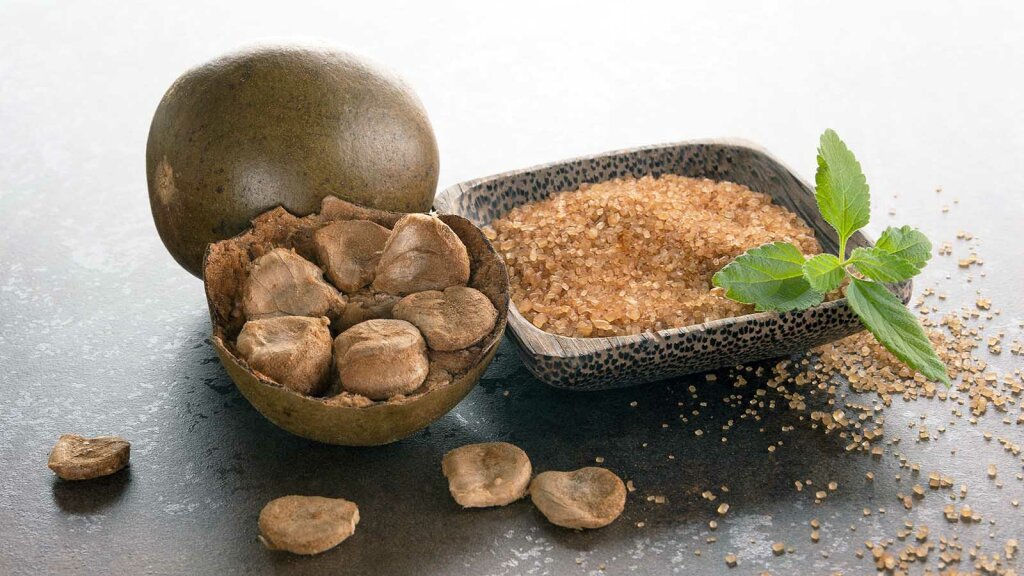 From the outside, monk fruit looks like a small brown melon no bigger than an apple. But inside, one of the world’s best natural sweeteners awaits. This fruit, indigenous to southern China and northern Thailand, produces a natural sweetener with zero calories, zero sodium and zero fat that’s up to 500 times sweeter than sugar.

Monk fruit has also long been used to treat illness across China. Then in 1995, it made its way to the big leagues when Procter and Gamble patented a technique to produce sweetener from the crop.

But the road from local sweetener and medicine to international phenomenon hasn’t been easy for monk fruit, known as luó hàn guǒ in Mandarin Chinese. China, the main monk-fruit exporter, banned the removal of the fruit’s seeds and genetic material in 2004, according to market-intelligence firm Beroe. This restriction gives the country a competitive edge, and also means those outside China may never try fresh monk fruit — but monk fruit extract is a different story.

And extract is also its most popular form. Monk fruit extract is commercially available everywhere from big box stores like Walmart to major online retailers like Amazon, and it’s included in hundreds of products, including Chobani yogurt and Starbucks Double Shot Coffee.

So how did monk fruit, a member of the gourd family, become a star among sweeteners? Its story starts in the mountains of southern China.

A Brief History of Monk Fruit

Buddhist monks in southern China’s Guilin area were the first to discover luo han guo in the 13th century. This landscape, with its dense, steep mountains, ideal sunlight, and 60 to 80 percent humidity, is optimal growing grounds for monk fruit. The monks believed these gourds would guarantee long life, and the Chinese still rely on the monk fruit’s health benefits to this day.

“Monk fruit is used at home for medicinal purposes,” Ruixi Hu, founder of Lost Plate Food Tours, says via email. Hu grew up in Chengdu, China, and runs food tours across the country and beyond. “It is good for coughs, dry mouths, ulcers and constipation. In China, all of those symptoms are ‘hot’ in Chinese medicine, so monk-fruit tea ‘cools’ you down.”

While it may be used as a sweetener, monk fruit isn’t simply a sugar swap. “It has a very unique taste,” Hu says. “It’s a little bit sweet. It has a very earthy taste.”

This subtly sweet taste pairs with health promises like zero calories, zero carbohydrates, zero sugar, low-glycemic properties, and the ability to reduce oxidative stress (an imbalance in the body of free radicals and antioxidants, according to Medical News Today.) The U.S. Food and Drug Administration (FDA) also has monk fruit on the “generally regarded as safe” list, which means there appear to be no harmful side effects — although more research is needed to understand the full health impacts, according to Healthline.

Health perks are among the many factors that make monk fruit so appealing, and that’s why companies now incorporate monk fruit left and right, be it natural product sweeteners or commercially available extracts such as granules, powders and liquids.

How to Use Monk Fruit

Given China’s 2004 regulations, most people outside of the country won’t see monk fruit in anything but extract form. But Hu says people in China don’t eat the fresh fruit either. “We never eat it, we only drink it,” Hu says. “I’ve heard that some places in the south stew with it, but that’s not very common.”

Even in China, monk fruit is typically sold dried; it shares shelf space with raisins. But Hu says tea is one of few ways to use the fresh fruit; this is the same remedy they use for ailments like coughs. “You crack it open with your hands and put it into hot water and drink it,” she says. “You can put the entire broken-up fruit into the hot water.”

Monk fruit can also work as a sugar substitute for everything from salad dressings to sweet chocolate brownies. It’s heat stable, although its unusual taste means you should plan to experiment before perfecting a monk-fruit-sweetened recipe.

Trending – Are Sarah G and Matteo planning to have a baby soon?