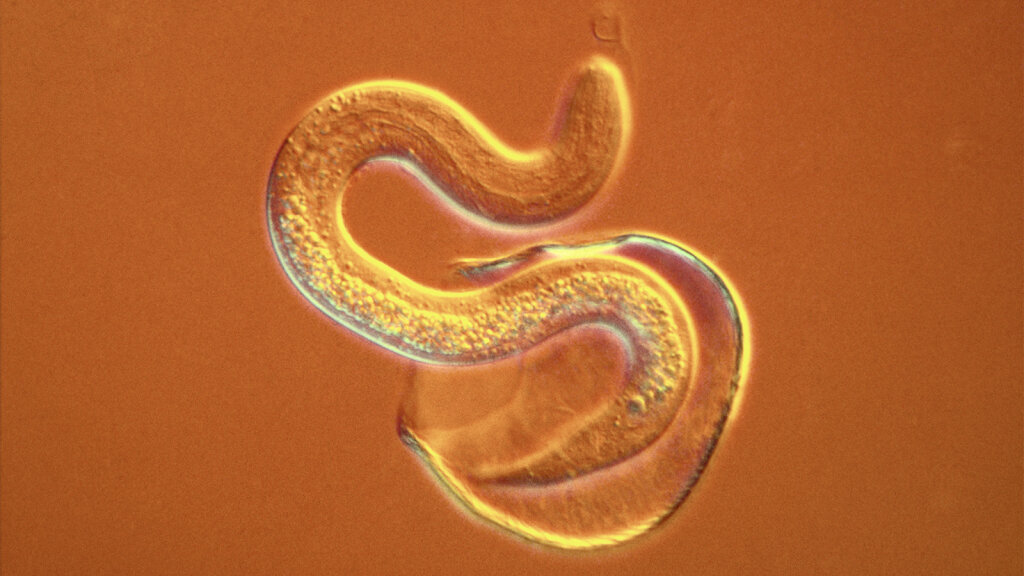 Was your mom a stickler about wearing shoes outside when you were a kid? She was probably trying to keep you from coming into contact with nematodes, more commonly known as roundworms. These microscopic worms, which are the most plentiful of all multicellular animals, are often parasites of humans, animals, plants and even insects. There are about 20,000 species known to science, but some believe that number is a serious understatement.

Don’t think you’ll ever come in contact with nematodes? Thousands can take up residence in just a small handful of soil. So probably best not to go stomping around in the dirt barefoot. “Some nematodes are considered ‘soil transmitted parasites,’ and so they can be of concern because they can penetrate the skin of the foot (or any other skin surface),” explains Dr. Chad Cross, a research scientist at the University of Nevada, Las Vegas School of Community Health Sciences in an email. “The term ’roundworm’ is colloquial for the ‘nemotoda’ or nematodes, which include a host of harmless species, but also common parasites (hookworms, filarial worms, ascarid worms, whipworms, pinworms, etc.)”

Some people are at higher risk of coming into contact with these tiny little worms. “For those who live in areas where hookworms are common (e.g., village farmers, children playing in the soil, or waste-contaminated sandy beaches), nematode larvae have the ability to penetrate the skin. Hence, it is important to wear shoes in these conditions,” Cross advises.

Under those circumstances, the worms have already hatched, giving them opportunity to penetrate the skin. But that’s not the only way to wind up with an intestine full of nematodes. Often, people swallow eggs when they touch contaminated soil, then eat without washing their hands first. Failure to wash contaminated fruits and veggies before eating is another way to swallow them. Once ingested, the eggs hatch, larvae thrive and the cycle continues.

Not all nematodes affect humans very much. “Some nematodes, particularly those that usually parasitize animals, may not be able to penetrate deeply into human tissues,” Cross explains. “In these cases, the larvae may travel around under the skin, leaving visible, and quite itchy, trails; this is called ‘cutaneous larva migrans.'”

Some nematodes that enter through the skin, however, are able to penetrate into tissue, traveling deep within the body. As most nematodes prefer to take up residence in the intestine, they have to trek quite a long distance, all the way through the body to the lungs and then to the intestines. “This is where they obtain nutrients and produce eggs that will exit with fecal material,” says Cross.

So how’s a person to know if a nematode is wreaking havoc? The itchy trail Cross mentioned is one sign that’s not always present. Indeed, symptoms can be very mild, sometimes virtually unnoticeable, but have the potential to get out of control. “When nematodes are in the lungs, one may experience coughing of unknown origin. Once they travel to the intestine, one may experience loss of appetite, pain in the abdomen, and signs of malnutrition (weight loss, vitamin deficiency, and anemia),” Cross explains, adding, “In some cases, the parasite load may be sufficient to cause bowel obstruction.” Extreme cases can even result in dramatic onset of malnutrition symptoms, which can cause a host of other problems.

Treatment depends on the severity of the infection, but is typically very effective. Antihelminthic drugs (like albendazole and mebendazole), which are expressly used to expel parasites, are ideal for acute infections. Sometimes, people in areas with higher risk opt to receive treatment on a regular schedule (such as every six months or so), “to reduce the parasite load in the population, which reduces both individual patient burden, but also can serve to reduce infections in others because fewer eggs and larvae are in the environment,” Dr. Cross explains.

So, maybe take that extra moment to strap on some shoes before walking around outside. While you’re at it, wash your hands extra-good before eating, and thoroughly rinse off that fresh produce. Your wormless belly will thank you.