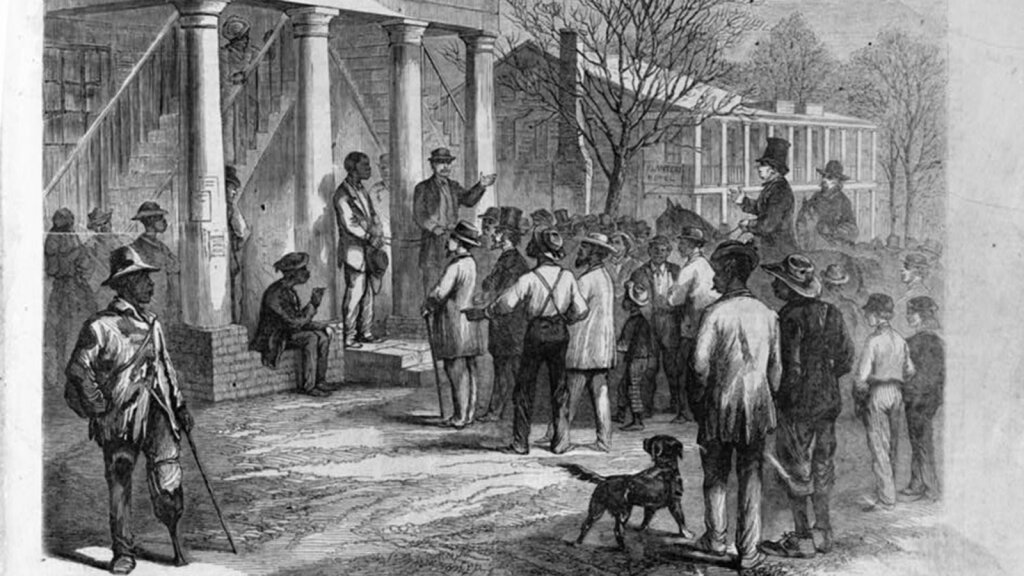 On April 9, 1865, the long and bloody American Civil War finally came to an end. It had already been two years since President Abraham Lincoln issued his Emancipation Proclamation, but after the Confederacy’s surrender at Appomattox Courthouse, word slowly spread among the more than 4 million enslaved Black men, women and children that they were truly and officially free.

White plantation owners, however — in league with Southern lawmakers and Northern corporations — had other ideas. Starting with Mississippi and South Carolina, all-white state legislatures passed a series of laws called the Black Codes intent on re-enslaving African Americans by essentially criminalizing Blackness.

“[White Southerners] have a clear sense of how they want to restructure their society after the Civil War and they’re going to make sure that they do that through these legal and extra-legal means,” says T. Dionne Bailey, a history professor at Colgate University who specializes in African American women’s history and mass incarceration.

Slavery By Another Name

The Black Codes enacted in late 1865 and early 1866 were devised to keep freed Southern Blacks legally bound to white plantations. The greatest fear of Southern cotton growers and their Northern manufacturing partners was that with the end of slavery they would lose access to the cheap (or free) and plentiful labor that had made cotton a cash crop.

With real emancipation, newly freed Black men and women could strike out on their own, farming their own land or plying a trade as a skilled artisan. But where would that leave the large plantations, which relied on Black bodies to till their fields and pick their cotton? If slavery was illegal, there needed to be another way to keep Black people subservient and indebted to the white planters.

The answer was to pass laws like the Black Codes that criminalized any attempt by Black men and women to break free from servitude. The result was what journalist Douglas Blackmon called “Slavery By Another Name”, the title of his 2008 book — namely the widespread practice of free Black men and women unjustly imprisoned, and then auctioned off to plantations and corporations to work off their “fines.”

The Black-only Crime of ‘Vagrancy’

Vagrancy laws were common in the 19th-century, giving local sheriffs the authority to arrest “vagrants” who were unemployed, hanging out on the street and potentially looking for trouble. But the Black Codes in states like Mississippi and South Carolina created a whole new category of vagrancy that only applied to Black people.

“After the Civil War, the South was destroyed,” says Bailey. “There was no infrastructure left. You have poor whites and newly freed Blacks, and a lot of people didn’t have jobs. But these vagrancy laws specifically attacked African Americans.”

According to the Black Codes, any Black person without a work contract from a white planter could be arrested for vagrancy. That means that no Black person could farm for themselves or work independently as a blacksmith or carpenter. They had to work for a white planter — often the very same person who formerly enslaved them — or go to jail.

Poor Southern whites, on the other hand, could do whatever they pleased. They could work or not work and they would never be charged with vagrancy.

A Black person arrested for vagrancy under the Black Codes would then enter a cycle of forced labor from which there was little hope of escape. First, they would be hit with a fine so exorbitant that they’d never be able to pay it. To pay off the debt, they would then be auctioned off (literally sold) to a planter who would pay the “vagrant’s” wages directly to the state. Once a Black person was convicted of vagrancy, there was no incentive for former slave masters to ever set them free.

“Your labor is costing almost nothing,” says Bailey. “They don’t have to clothe you, they only have to feed you enough to keep you alive. And there’s this sense that even if one vagrant dies, you could get another. Under this guise of vagrancy, they knew it was an unlimited source of Black bodies.”

The U.S. Congress passed the 13th Amendment formally abolishing slavery in January 1865, before the end of the Civil War. But the amendment contained a gaping loophole that the Black Codes were quick to exploit. The 13th Amendment states (italics added):

“Neither slavery nor involuntary servitude, except as a punishment for crime whereof the party shall have been duly convicted, shall exist within the United States, or any place subject to their jurisdiction.”

Slavery was abolished except when it was a punishment for a crime, which is why the Black Codes made “Black vagrancy” a crime. And why young Black children would be forcibly removed from their parents under the guise of “negligence” and then “apprenticed” to a white planter for no pay.

“This was a legal system set up to not only mimic slavery, but to re-enslave all these newly freed men, women and children,” says Bailey. “And it effectively did.”

Tens of thousands of African Americans were leased by the state to planters, miners, corporations and others to pay off these debts, the Washington Post reported.

Formerly enslaved Black men and women were afforded some new rights under the Black Codes. They could own land and property, they could legally marry (only other Black people, of course) and they could sue and testify in court (but not against whites).

But those rights were merely window dressing on laws that were expressly designed to strip freed Blacks of any real freedom, particularly the freedom to work for themselves and earn a living wage.

“[Southern lawmakers] try to hide this under the guise of, ‘Well, you do have some rights. You can marry, you can testify in court,’ but only if it was a person of their race,” says Bailey. “[A Black person] could never take recourse against a person they worked for who was taking advantage of them or who didn’t pay them.”

The Shameful Legacy of the Black Codes

The Black Codes were short-lived. The U.S. Congress, frustrated with attempts by Southern lawmakers to sidestep Reconstruction, passed the Civil Rights Act of 1866, which affirmed that Black Americans must be afforded the same civil rights enjoyed by white people.

In the wake of the Civil Rights Act, the federal government imposed what’s known as “Radical Reconstruction” on the former Confederate states. During this time, Black men were given the right to vote and run for political office, and thousands of public schools opened across the South to serve Black children.

The Black Codes may have been nullified, but their legacy would echo down through racist post-Reconstruction laws and the indignities of Jim Crow laws that were enacted in the South in the 1890s and lasted all the way to the civil rights movement of the 1950s and 60s.

“The Black Codes laid the framework for how this whole system is going to work for the next 100 years,” says Bailey. Jim Crow laws made it illegal for Blacks and whites to share any public facilities, meaning that both groups had separate schools, libraries, hospitals, restaurants, etc. with Blacks receiving inferior facilities to whites.

In “Slavery by Another Name,” Blackmon wrote about a Black man named Green Cottenham who was arrested in 1908 in Alabama for “vagrancy,” the same trumped-up charge invented 40 years earlier by the Black Codes. Cottenham was auctioned off to the northern corporation U.S. Steel, who chained him in a suffocating Birmingham, Alabama, coal mine and tasked him with mining 8 tons (7.25 metric tons) of coal a day until his fine was repaid. If he collapsed from malnourishment or fatigue, he would be whipped. And if he died, he’d be buried in a shallow, unmarked grave with the rest. More than 1,000 Black men were toiling for U.S. Steel along with Cottenham in the same mine. In less than year, 60 were dead from disease, accidents or homicide.

Blackmon called this shameful chapter of American history “neo-slavery” and it was all set in motion by the Black Codes.

HowStuffWorks earns a small affiliate commission when you purchase through links on our site.

Hollywood Today – Checking In With the Father of the Bride Cast: See What...