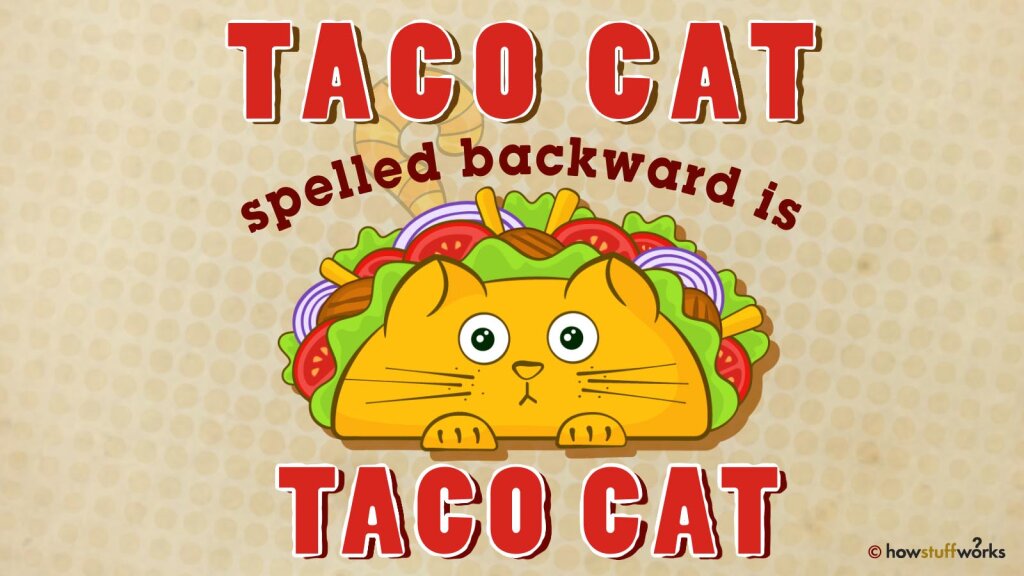 “Madam, I’m Adam.” If Adam said this on meeting Eve in the Garden of Eden, it would have definitely been the first palindrome. What’s a palindrome you ask? It’s a phrase (or a sentence, or a paragraph, or a story, or a poem or even a date) that reads the same backward and forward. Whether you start on the right or the left, and not accounting for punctuation, that sentence reads, “Madam, I’m Adam.”

The word palindrome comes from the Greek “palin-” meaning back or again, and “-dromos,” which means running or moving. So it’s a word or phrase that’s running back on itself.

The first palindrome we know of comes from 70 C.E., and it’s in Latin:

This is translated as either “The sower Arepo holds the wheel with effort” or “The sower Arepo leads with his hand the plough.” That word “rotas” can refer to a wheel or to a plow or even to a chariot, but it’s very unlikely that a sower would have anything as fancy as a chariot.

The first mention of palindromes in English comes in “Camden’s Remaines,” published in 1636 by John Philipot:

Palindromes are those where the syllables are the same backward and forward… Ablata at alba… Si nummi immunis.

But even Philipot gives the reader palindromes in Latin, not Greek — and not even English. The first means “secluded but pure,” and the second “Give me my fee, and I warrant you free.” (In other words, if you pay me, I’ll free you.)

In 1706, we find an early English palindrome in “The new world of words; or universal English dictionary”:

Lewd did I live, and evil I did dwel.

This one only works if you have lax spelling rules for the word “dwell,” as they did in the early 18th century. And if you kind of ignore the “and” in the middle. But it’s still a pretty juicy palindrome.

It’s possible to create a palindrome word by word or line by line rather than letter by letter too. A simple example might be “night after night.” This example comes from the poem ” Doppelganger,” which was constructed by James A. Lindon to read the same backward and forward.