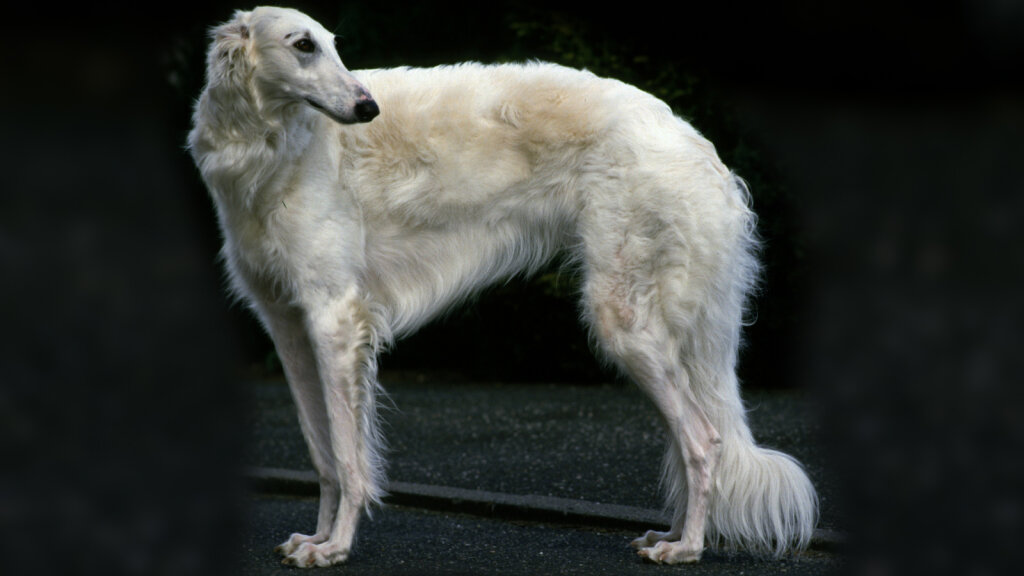 The short answer is yes. But since they are bred to run and chase, it’s important to teach a solid recall, according to Ellis. “Despite their need for speed, they have a very laid back and calm demeanor,” she says. “They are generally very sweet and calm (except when outside running), and a loving dog that likes other animals. They don’t bark much, so they aren’t meant to be guard dogs … they won’t be the dog that goes crazy when someone comes inside.”

As for training them: “They are very intelligent,” adds Ellis, “but they are also known to be stubborn and independent, which can make training a bit more difficult.” According to the AKC, the best course of action is to practice consistency and patience. Training sessions also should be fun, with positive techniques working best for the breed. For example, consider using the borzoi’s love of running and chasing a moving object to reinforce good behavior.

How Do You Best Care for Them?

The borzoi is a calm dog that can adapt to most environments, according to Ellis. “They aren’t made to be running all day long and aren’t extremely active,” she says. “They prefer a quick high-intensity exercise (preferably in a fenced-in area due to their intense instinct to chase) and then lots of relaxation. A game of chase or sprint outdoors will usually be followed by lounging the rest of the day.” In addition, because they are sighthounds, small children, cats and anything that moves quickly should be introduced to the dog when it is young. “Otherwise,” says Ellis, “the dog may be cautious or nervous of them later on.”

Like most long-haired dogs, they are prolific shedders and require frequent brushing every couple of days to keep loose hair under control. Fortunately, mud and dirt don’t easily stick to their silky fur, so bathing is not required as often as might be expected. But the hair between the paw pads does need to be trimmed regularly.

Finally, they are prone to tummy aches and bloating because they can’t fit much food in their stomachs at once. To avoid this, they should have small meals several times a day instead of one or two large meals.

Where Can I Find One?

They are a bit difficult to find in the U.S. because they aren’t a particularly popular breed, so Ellis suggests finding them through a good breeder via the Borzoi Club of America or a breed rescue like the National Borzoi Rescue Foundation (although it might take some time to find one that fits your criteria). If you’re interested in a borzoi,” she adds, some other breeds to look at include the saluki, silken windhound and Irish wolfhound.

Hollywood Today – This Is Us’ Rachel Naomi Hilson Has the Vegan Taco Recipe...