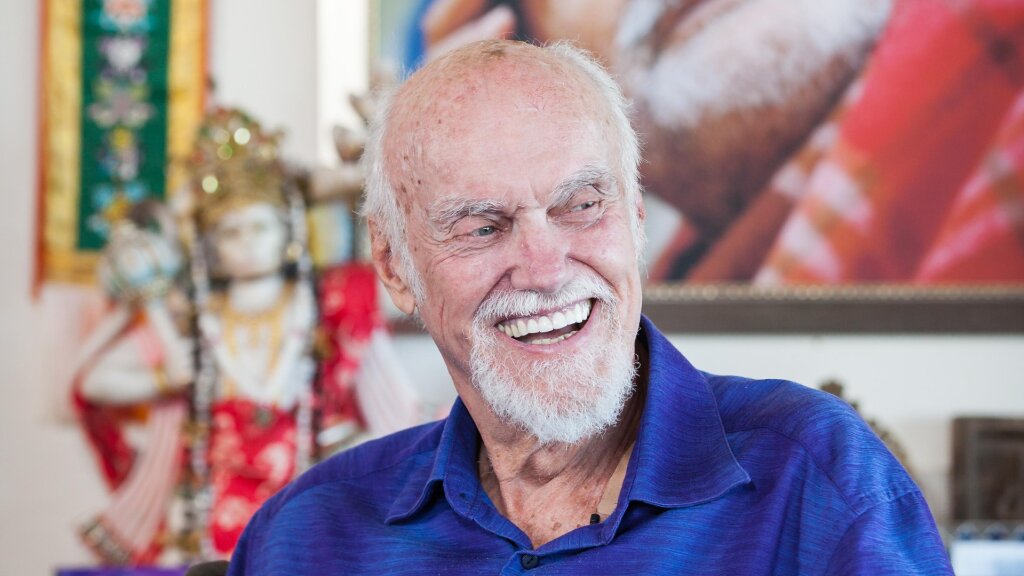 At one point or another, you’ve probably heard the phrase, “Be here now.” The saying isn’t just a Pinterest-friendly slogan, but one of the most enduring tenets of famed psychologist-turned spiritual leader, Ram Dass. By the time he wrote the book, “Be Here Now,” in 1971, he’d already amassed a major following based on his meditations that were rooted in a unique combination of teachings from Buddhism, Hinduism, Advaita, Sufism and later, Jewish mysticism. To date, “Be Here Now” has sold over 2 million copies and up until his death at age 88 in 2019, Dass continued to spread his message of unconditional love through several more books, online courses, podcasts and more.

Born Richard Alpert in Boston in 1931, he received an M.A. from Wesleyan in Connecticut and a Ph.D. from Stanford and served on the psychology faculties at Stanford and the University of California. He accepted a tenure-track position at Harvard University in Cambridge, Mass., in 1958 as an assistant clinical psychology professor.

It was during his time teaching at Harvard in the 1960s that he met Timothy Leary, a lecturer in clinical psychology at the university, and he began exploring human consciousness with Leary and some of the era’s most prominent thought leaders on psychedelic drugs. Because of his controversial new research interests, Harvard let Alpert go in 1963 and he eventually relocated to India where he met Neem Karoli Baba, who renamed him with the moniker Ram Dass, which translates to “servant of God.” Over the next few decades, Dass learned about a variety of spiritual methods and practices from ancient traditions, and developed his own belief system inspired by a variety of these teachings.

“One of the most beautiful things about Ram Dass was how honest and transparent he was with everything in his life,” Ganesh Braymiller, a content writer and editor for the Love Serve Remember Foundation and the Be Here Now Network, writes via email. “This type of unrelenting honesty and humility, mixed with his laser-focus on helping people awaken through sharing his own pitfalls and humanity, helped foster a relationship of authenticity, trust, love, seva (selfless service) between Ram Dass and our still-growing community of seekers and individuals who have been touched through his teachings.”

Here are three of Dass’ most enduring spiritual teachings and how they relate to the here and now:

Everyone Should Become Nobody

It’s no accident that the title of the 2020 Ram Dass documentary by filmmaker Jamie Cato is “Becoming Nobody.” Through the course of his own experiences, Dass developed the belief that openness and curiosity were imperative traits to have in order to strip away the artificial “masks” of everyday life and become unified with others.

“While the body of Ram Dass’ teachings reflects a myriad of themes and messages, possibly the most overarching lesson that Ram Dass shared and exemplified throughout his life was in the notion of ‘becoming nobody,’ of offering one’s selfish goals to the abyss of service to others,” Braymiller says. “Ram Dass is another name for the Hindu monkey-deity, Hanuman, who represents the overcoming of the monkey-mind through selfless service to the divine, to help relieve suffering. His lesson of ‘becoming nobody’ encompasses his early message of presence instilled in his famous ‘be here now’ teachings, along with the theme of ‘soul land’ he imbibed through his ‘loving awareness’ meditations later in life. ‘Becoming nobody’ is losing yourself into the visceral present moment of service to other souls in order to relieve suffering; something Ram Dass taught and exemplified throughout the entirety of his incarnation.”

“Ram Dass’ life’s work has been based around relieving suffering and bringing people closer to God, to that place of wholeness, of total-okayness,” Braymiller says. “Returning from India in the late 1960s, Ram Dass brought back methodologies of yoga, or union, offering seekers a deep and varied toolkit for working with their suffering. These methodologies included Vipassana meditation, bhakti yoga and kirtan, japa practice, asana and hatha yoga, self-inquiry and karma yoga, the path of service, to name a handful. All of these practices are aimed at working on oneself to help reduce one’s own suffering and the suffering of those around them by developing a calm, loving witness, and a relationship with the divine loving presence, what many would call God.”

Otherwise known as insight meditation, Vipassana focuses on paying close attention to sensation, and some believe it’s the form of meditation Buddha taught. Kirtan is a form of bhakti yoga (the yoga of devotion) and involves yogic chanting, and japa consists of the repetition of a mantra. Modern Western yogis are often most familiar with asana — the physical postures of yoga — and hatha involves moving through these asanas as a way to “elevate your consciousness.”

“Ram Dass’ Guru, Neem Karoli Baba, when noticing a devotee was crying and upset, told her, ‘I love suffering — it brings me so close to God,'” Bramiller says. “While suffering isn’t something we would wish on ourselves or others, Ram Dass described it as fertile soil, not just for witnessing where our attachments have us hung up, but also for touching the truth of an ever-changing, impermanent reality.”

The Ego Is an Illusion

According to Braymiller, some of Ram Dass’ earlier talks revolved around the notion of the ego as an illusion. Dass saw the ego as a structure of the mind that organizes the universe and serves as the “central computer necessary for running the game” and a “domain of separateness.” This, he believed, contrasts with the heart, which is rooted in unconditional love. Braymiller says he viewed the ego “as a mind-net created by the individual as an entity-protector, giving each person the somewhat false idea that they are separate from everybody else and thereby should only protect one’s own personal self-interest. As his view on the ego matured, Ram Dass recognized the importance of a healthy ego, balanced as a ‘lovely servant, but a lousy master.'”

One of Dass’ favorite passages on this topic came from the Third Chinese Patriarch, an ancient Zen text, which states, “The Great Way is easy for those with no preferences.” Braymiller says Dass took this to mean that “illuminating the path of awakening as simple and direct, but steep and difficult as we journey from ego to Self.”

Another major influence on Dass’ perspective on ego? Psilocybin. Otherwise known as magic mushrooms, the hallucinogenic substance is known to cause feelings of euphoria and sensory distortion, much like LSD. Dass wrote candidly about his experiences with the drug and how he was introduced to it when he was still known as Richard Alpert, a high-achieving Harvard psychology professor. His teacher in all things psychedelic was none other than fellow professor, Timothy Leary, aka one of the world’s biggest proponents of mind-altering drugs in the 1960s.

“Ram Dass’ first psilocybin trip with Tim Leary and Allen Ginsberg helps exemplify this distinction between ego and self,” Braymiller says. “After ingesting the psilocybin, Ram Dass went to the other room to be alone. While hallucinating, he witnessed his personal roles leaving him; he let go of his professor-ness, he gave up his role as a son, as a wise-man, as a cosmopolite, as a lover … he could give up all of these social roles and still hold a sense of presence, but then it came down to his body. In his state, he looked down, and saw he had no body.”

While this may sound positively terrifying to most, Braymiller says Dass felt an intense calm wash over him that “quelled a potential scream with a soft, inquisitive query: ‘who’s minding the store?'” Everything Dass felt he’d ever known about himself was gone but he was acutely aware that something still remained. “This was Ram Dass’ first cognizant taste of the self — the presence that is the true seat of all the ego-roles we constantly inhabit.”

Years later, Dass suffered a stroke and moved to Maui. It was in his new home of Hawaii that Braymiller says Dass would repeat the mantra, “I am loving awareness, I am loving awareness…” and that this repetitive practice served as “one of the most potent tools Ram Dass left us to help move past the ego, to begin to inhabit the self, the soul.”

Braymiller says that because of Dass’ unwavering commitment to honesty and transparency, there’s not much more he can reveal about the spiritual figure that isn’t already chronicled in Dass’ own work. “I recommend anyone interested in his heart, messages and teachings to visit RamDass.org for lectures, podcasts, books and upcoming Ram Dass events,” he says.

Sports Today – Sports companies band together to help the medical field in time...

Hollywood Today – Survivor: Winners at War Just Gave Us All the Best Happy...