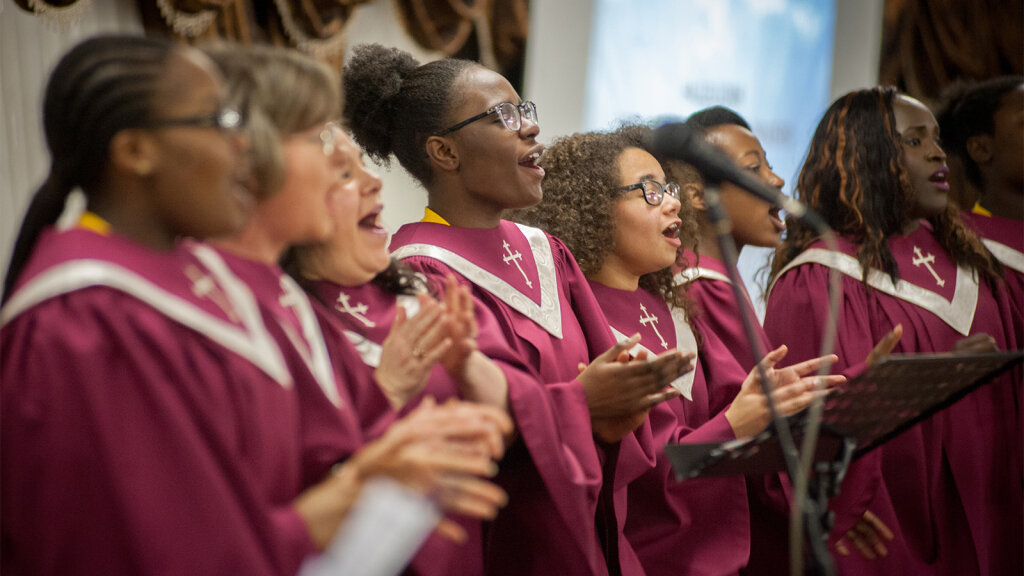 When enslaved Africans were brought to the United States, they were forced to leave behind nearly all material possessions. But they retained their cultural traditions — including a tradition of vibrant, rhythmic communal music.

And that’s how the black spiritual was born. Although white communities had their own folk spirituals, slaves used spirituals as a form of work song in order to boost their companions’ spirits, convey their sorrows, convey secret messages, and seek comfort in God.

Sandra Jean Graham is an Associate Professor of Ethnomusicology at Babson College and the author of “Spirituals and the Birth of a Black Entertainment Industry.” Although slaves came from many different African societies, there were some common musical traditions that brought about the spiritual. According to Graham, who we spoke to by email, these practices included communal songs featuring call-and-response, in which some performers – or usually, the leader — would call a statement or ask a question, and other singers would respond.

Songs also exhibited a “flexible approach to pitch” and a pattern of “repetition and variation” that allowed for overlapping musical layers and “improvised embellishment of melodies and rhythm,” according to Graham. Graham also cites black composer and scholar Olly Wilson, who stated that there was a preference for a “heterogeneous sound ideal,” or a combination of certain timbres of voices and instruments, which was common to many African and African American musical traditions.

“In addition, music was usually linked to other arts — such as dance, poetry, drama, clothing — and it played a prominent role in social and political life. And finally, music had a spiritual aspect, linked to ritual, the ancestors, the gods that inhabited the natural world,” says Graham.

The Secret Language of the Slave Spiritual

Perhaps most famously, slaves communicated secret messages through spirituals, as a way to bypass the slave masters who would be listening in on their conversations. They sang through coded songs to provide instructions that would allow them to escape to the North and to freedom, particularly on the Underground Railroad.

“Harriet Tubman famously used ‘Go Down, Moses’ to signal that she was nearby and ready to conduct people to the North, and she used ‘Wade in the Water’ to direct her ‘passengers’ toward a river if bloodhounds were on their trail,” says Graham.

According to Graham, Frederick Douglass — who became a prominent abolitionist after escaping slavery — wrote about singing a spiritual in an escape attempt, including the words “run to Jesus, shun the danger, I hain’t going to stay much longer here.”

However, the enslavers caught onto Douglass’ plan because they sang too fervently. It’s possible that spirituals didn’t function as much in escape attempts as we might think, though it’s “impossible to know” due to the lack of written documentation, says Graham.

But after the Civil War and the abolition of slavery in the U.S., spirituals took on a new purpose in the black community. They became a key fixture of commercial entertainment during the Reconstruction era.

“Folk spirituals evolved during Reconstruction to become arranged concert music that was written down and sold in books and sheet music,” says Graham. This new spiritual was intended to be more of a presentational experience with performers and observers rather than a communal experience in which all attendees participated.

“So the biggest change was that spirituals were presented as art music and were also committed to print, removing the plethora of opportunities for improvisation and participation that the folk tradition had provided,” says Graham.

And there was one group that popularized this concert spiritual more than any other: the Fisk Jubilee Singers, who went on tour to fundraise for Fisk University in the 1870s. After the singers’ tour, their spirituals became branded as ‘jubilee songs,’ which held sway in pop culture through the end of the 19th century.

In the early 1900s, Harry T. Burleigh took up the mantle and began composing spirituals for solo singers and pianists, which singers like Marian Anderson, Paul Robeson and others performed in the 1920s through the 40s.

But in the latter half of the 20th century, spirituals fell out of favor among African Americans. Randye Jones wrote in her book “So You Want to Sing Spirituals: A Guide for Performers” that “As a result of the rebirth of racial pride obtained from the civil rights struggles of the 1960s, anything that appeared to reflect passivity and acceptance of the status quo was rejected by the young warriors who fought in the trenches to reap the rewards of political activism.”

According to Jones’ book, many black activists turned to gospel music instead, which had risen out of the rise of Pentecostal worship in the early 1900s.

Graham expands on the difference between gospel music and spirituals: “Whereas spirituals focused on the afterlife as a source of eventual freedom, gospel (meaning “good news”) songs focused on the here and now — how to get through each day.”

But what about the connection between spirituals and other musical traditions within the black community, such as the blues? Graham cites theologian James Cone, who called blues “secular spirituals.”

“They may have been born in freedom, but African Americans still suffered, and the blues was a vessel into which they poured their daily troubles. Lots of blues artists even sang spirituals in the blues style,” says Graham.

Remembrance of Things Past

In the 21st century, spirituals primarily serve as a form of “legacy music” or a remembrance of the past, according to Graham. “But it is true that spirituals are, in a sense, no longer a ‘living’ tradition. The last time they were newly created to serve a vital social role was during the civil rights movement.”

But spirituals also live on today in the imagination of modern-day artists, like the McIntosh County Shouters and pianist Lara Downes. Downes’ forthcoming album, “Some of These Days,” reflects on social justice themes, particularly through her contemporary rendition of spirituals. Downes chose spirituals partly as a way to connect to her family history and the black struggle for freedom.

“My dad was black and my mom is white, and they met at a sit-in during the civil rights movement. And that movement was really powered by this music — these spirituals and freedom songs — so this music was the soundtrack to their activism and their love story,” writes Downes in an email.

Downes was drawn to the emotional intensity, defiance and underlying message of hope within spirituals. She drew inspiration from performances by black singers and civil rights activists like Mahalia Jackson and Nina Simone.

For Downes, spirituals represent “our conscience and our courage.” They also remind her of the “uneven nature of progress” throughout U.S. history.

“They are the best possible reminder that the road to freedom is a long one, and we still have a long way to go. That we have to keep moving forward despite roadblocks and hazards, and we have the ancestors at our backs.”