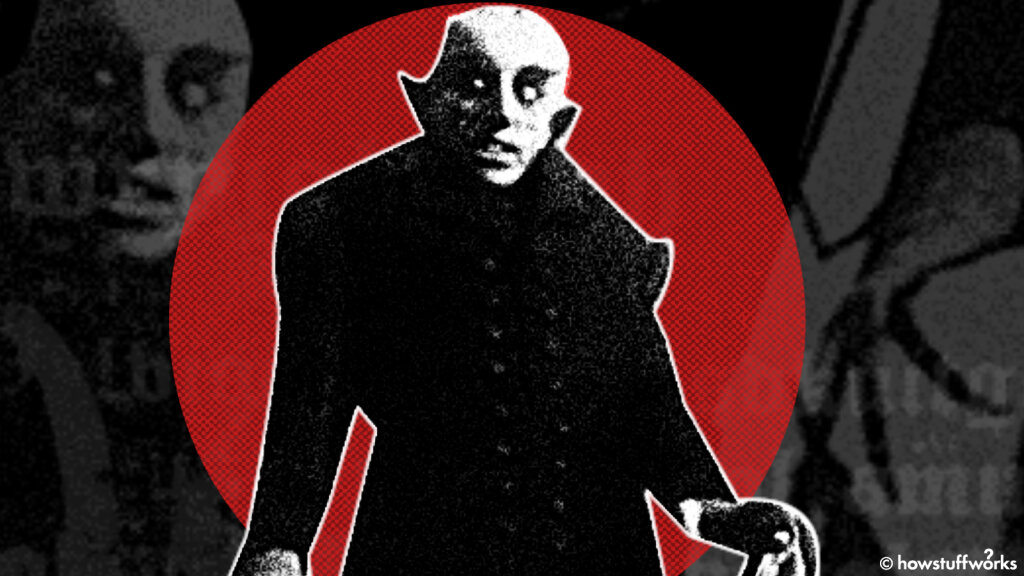 Death wasn’t the end for poor Lucy Westenra. A character in Bram Stoker’s 1897 novel, “Dracula,” she fell victim to the book’s aristocratic villain. While stealing her blood night after night, Count Dracula of Transylvania slowly drained the life out of Lucy.

But that was only the beginning. For the young woman’s killer also transformed her into an undead vampire like himself.

A brief reign of terror ensued at the graveyard. Then Lucy’s living fiancée, Arthur, and his companions — including the vampire-savvy Dr. Abraham Van Helsing — found her awake near her tomb. She was finally destroyed for good after trying to lull Arthur into a lover’s embrace.

Had Arthur accepted her “kiss,” Dr. Van Helsing explained, the mourning suitor would have “become nosferatu, as they call it in Eastern Europe.“

“The nosferatu do not die like the bee when he sting once,” Van Helsing later said (in the good doctor’s broken English). “He is only stronger; and being stronger, have yet more power to work evil.”

In “Dracula,” Stoker treats “nosferatu” as a synonym for “vampire.” Countless horror writers took his lead over the next 123 years; even “Treehouse of Terror IV,” a 1993 episode of “The Simpsons,” used the two terms interchangeably.

Like Van Helsing, Stoker believed “nosferatu” was an authentic word of Eastern European origin. But the evidence tells another story. “Nosferatu” is probably a mistranslation of some Romanian or Greek term scholars have yet to pin down.

Whatever its origins were, horror media gave “nosferatu” a new meaning. And it became ready-made title fodder for some of the scariest vampire stories ever to rise from the shadows.

Travel writer Emily Gerard was talking vampires well before “Dracula” went to print. Born in Scotland in 1849, she emerged as a novelist and literary critic. Yet history mostly remembers her nonfiction works on European folklore. Gerard’s 1885 essay, “Transylvanian Superstitions” contains the following passage:

“More decidedly evil, however, is the vampire, or nosferatu, in whom every Roumenian [sic] peasant believes as firmly as he does in heaven or hell.”

The problem is, “nosferatu” wasn’t a real word. Not in Romanian and not in any known Eastern European language or dialect. Gerard might have bungled the Romanian word “nesuferit,” which means “unbearable.” It’s also possible that she misinterpreted (and misspelled) “necuratul,” a Romanian term for “devil.” Or maybe Gerard was thinking of the Greek word “nosorophos,” defined as a “plague-carrier.”

A 19th-century travel piece, “Torturing Spirits in Romanian Popular Belief,” attributed to Heinrich von Wlislocki, makes a similar mistake. The text mentions the “Nosferat,” whom the author calls the “most dangerous torturing spirit of Romanian folklore.” That doesn’t prove he was ever exposed to this concept out in the field. Wlislocki may have borrowed the word “Nosferat” from Gerard’s writings.

Bram Stoker seemingly did. Most horror historians credit Gerard’s essay and her 1888 book “The Land Beyond the Forest: Facts, Figures and Fancies from Transylvania” with introducing Stoker to the term “nosferatu.”

But “nosferatu” only makes two appearances in the “Dracula” novel. It didn’t really go mainstream until one of Germany’s strangest motion picture companies came along.

Prana Film just couldn’t help itself. Founded by Albin Grau and Enrico Dieckmann, this young, German-based studio was drawn to all things occult and supernatural. Early in the 1920s, Prana resolved to put “Dracula” on the silver screen. What followed was a true classic of the horror genre — and a legal disaster.

Jonathan Bailey is a writer and horror fan. He’s written about the surprisingly long history of copyright issues in monster cinema on his website, “Plagiarism Today.”

“Prana Film wanted to do an expressionistic retelling of the story of Dracula. That was very much the intent from day one,” Bailey says in an email. “However, the estate of Bram Stoker (meaning his widow Florence Stoker) didn’t want to sell them the rights. Rather than abandon the idea, they changed the name and a few other elements … to make it an ‘original’ work.”

Bailey explored the revisions in a 2011 web article. Calling most of them “superficial” would be generous. The vampire in Prana’s script is still an aristocrat with a spooky castle who travels across the sea and raises hell in a new city. But here, he goes by “Count Orlok” rather than “Count Dracula.”

Germany had already signed onto an international agreement protecting the copyright of “literary and artistic works.” By keeping Bram Stoker’s basic plot more or less intact, the team at Prana was running afoul of the law — whether they realized it or not.

“Film was a VERY new medium at the time, especially commercially,” notes Bailey.

“Whenever a new technology comes along for creativity, copyright is usually one of the last things to get serious thought … Even if filmmakers understood the basics of copyright law, they likely didn’t grasp the nuances of it. After all, they’re filmmakers, not lawyers. This is something that remains very true today,” Bailey tells us.

On March 4, 1922, Prana Film’s “Nosferatu” premiered at the Berlin Zoological Gardens (of all places). Starring Max Schreck as the seriously creepy Count Orlok, it was acclaimed by audiences and most critics.

Most critics, that is, except Florence Stoker.

Working on her behalf, a German lawyer hired by the British Incorporated Society of Authors sought compensation from Prana. That they’d plagiarized “Dracula” was not in doubt. However, the studio had blown a large sum of money promoting “Nosferatu” and went bankrupt before the attorney came knocking. So, in accordance with Stoker’s wishes, a German court ordered that every copy of the movie be destroyed.

Try as she might — and man, did she try — Florence Stoker couldn’t slay “Nosferatu.” An American print survived the destruction campaign. Prana Film’s masterpiece now resides in the public domain; it’s gotten countless DVD rereleases and is free to watch on platforms like YouTube.

“Nosferatu” may have actually helped the franchise it ripped off. In 1924, Stoker’s widow authorized a new stage play adaptation of “Dracula.” The leading man in the Broadway production was a young Hungarian named Bela Lugosi.

He’d reprise the role for Universal Pictures’ classic (and legal) 1931 “Dracula” movie. Simultaneously, Universal made a Spanish-language version on the same sets with different actors. Count Dracula’s been a Hollywood darling ever since.

As for that haunting Prana flick, it got a high-profile remake in the form of Werner Herzog’s “Nosferatu the Vampyre” (1979). Then came the 2013 novel “NOS4A2” by Joe Hill, the pen name of Stephen King’s son, Joseph. A serialized TV adaptation ran on AMC for two seasons in 2019 and 2020.

So there you have it. “Nosferatu” is a word of unknown origin that appeared in a groundbreaking horror novel, got implicated in some legal drama, changed movie history and inspired a clever pun from a member of the King family. Emily Gerard had no idea what she’d started.

Sports Today – Newman’s Daytona 500 crash reminds us of fragility of life in...