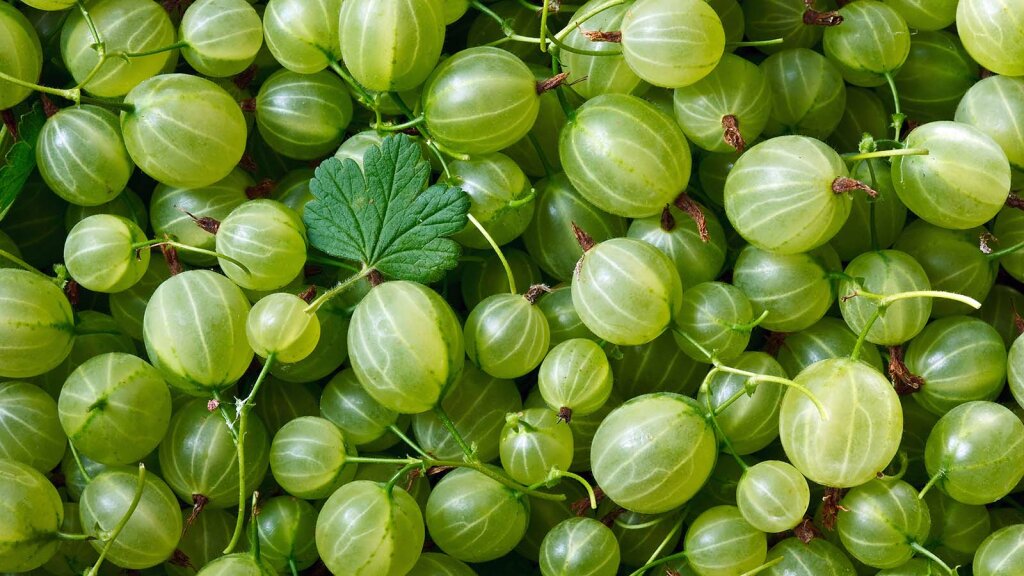 Don’t let the name fool you: The tart, subtly grape-flavored gooseberry has nothing to do with geese. The gooseberry, a fruit in the currant family, grows across Europe and north to the Arctic Circle. North America also has its fair share of gooseberry species, but growing the fruit on U.S. soil is far from simply plant and enjoy.

That’s because some states like Maine ban growers from planting certain gooseberry species, as well as its relative the black currant, because the fruits serve as an intermediary host for the destructive white pine blister rust. This tree-killing disease would decimate white pine-reliant economies, like those that depend on lumber.

So what is this peculiar, under-the-radar berry that’s strong enough to kill trees, yet sweet enough to be used in jam? We talked with gooseberry fan and GrowVeg representative Ann Marie Hendry to find out.

Where Do Gooseberries Grow?

Gooseberries are divided into two major groups: European (Ribes grossularia var. uva-crispa) and American (Ribes hirtellum). They are hardy fruits that thrive in cool, humid climates. Germany, Russia, Poland and Scandinavia typically grow gooseberries on large, commercial plantations, while gooseberries are often planted in smaller pick-your-own operations across the U.S. and Canada, according to Science Direct.

Gooseberries tend to grow on spiky bushes that can bear fruit for up to 20 years; home gardeners can also train the plants to grow against walls, where they’ll take up less space. Hendry recommends planting gooseberries in sunny spots, and says the resilient fruit’s low-maintenance requirements make it particularly attractive to home growers.

“Gooseberries need well-drained soil with plenty of organic matter such as compost added, but they don’t require much feeding,” Hendry says via email. “They need a balanced organic fertilizer once a year, just before they burst into growth. An annual mulch of compost or other organic matter should be sufficient.”

They may be low maintenance, but you can’t plant gooseberries just anywhere. Restrictions date back to a federal ban in the early 1900s, when growers realized gooseberries were intermediary hosts for the damaging white pine blister rust disease.

In 1966, the gooseberry restrictions shifted from federal ban to state-by-state jurisdictions. Now, most states welcome gooseberries with open arms, but some states like Maine still have restrictions. White pine is integral to the state’s economy, therefore the “sale, transportation and possession of Ribes spp. [gooseberries and currants] Is illegal throughout most of Maine,” according to Maine’s state government.

Where Can You Buy Gooseberries?

It may be a lesser-known fruit, but these days you can buy gooseberries just about everywhere. Stores like Trader Joe’s, Walmart and even Amazon sell versions of these tart berries. Indian grocery stores typically sell gooseberries as well; look for amla, the Indian gooseberry, in the produce and freezer aisles. You can also eat them straight from the source by foraging for gooseberries at pick-your-own farms across the country, with spots everywhere from Rhode Island to Washington.

And, if you’re trying your hand at growing then foraging your own gooseberries, Hendry says it’s best to break harvesting out in stages.

“You can spread out the harvest by picking some of the young, under-ripe berries from early summer for cooking. The remaining berries can be harvested in stages, or left to swell until they’re fully ripe,” Hendry says. “In the winter it’s a good idea to prune new growth back by about a half to keep them productive, but even neglected gooseberries bushes can fruit well, so they’re really a very low-maintenance plant.”

Gooseberries come in a variety of colors, including yellow, red, pink, green and purple. The two primary gooseberry categories are green and red; green is the more common, and milder gooseberry, while the red gooseberries have more sugar and are tastier for raw snacking.

Yes, you can eat them raw, but Hendry says they’re particularly tasty when cooked.

“Gooseberries need to be topped and tailed, then can be stewed for pies and crumbles, made into jam or dried into fruit leathers,” Hendry says. “They are quite tart in taste, so they are usually best mixed with sugar. There are some dessert varieties [such as the Invicta gooseberry] that are a little sweeter when fully ripe.”

Pies and jams are gooseberry staples, but the fruit’s tartness lends itself to creative recipes. Some timeless and creative gooseberry concoctions, such as gooseberry Champagne, gooseberry wine and green gooseberry cheese, date back more than 100 years.

Hacked! – Why Frederick Douglass Was the Father of the Civil Rights Movement