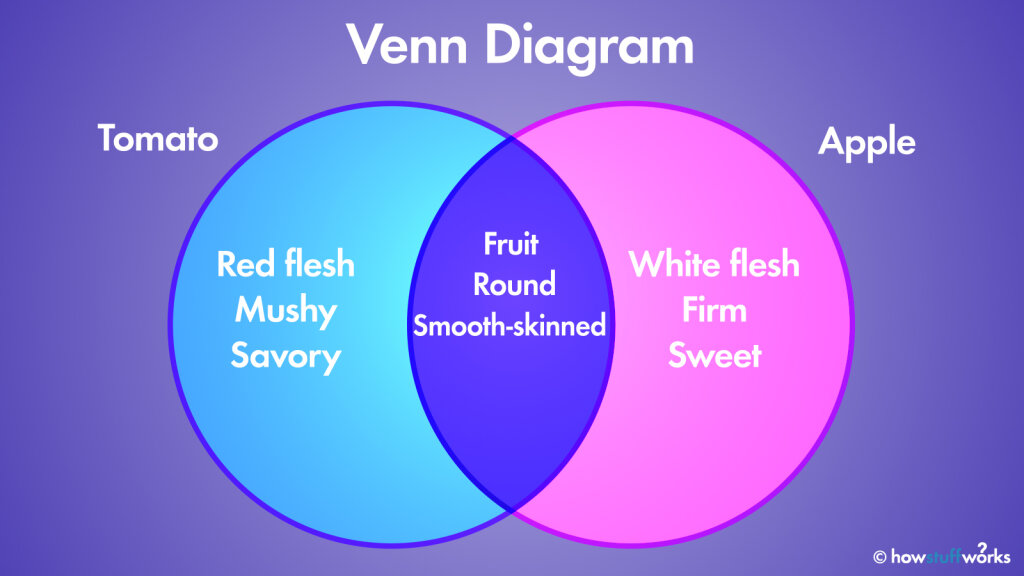 There are lots of ways we can represent data in visual ways: a bar graph, a pie chart, an interpretive dance if you’re into that sort of thing. But one fun way to present information is through a Venn diagram, which tells you the ways in which things are different and similar by placing them in overlapping circles.

The use of Venn diagrams was first formalized by English philosopher and mathematician John Venn, who wrote a paper in 1880 entitled “On the Diagrammatic and Mechanical Representation of Propositions and Reasonings.” In this paper he suggested that formal logic could be presented in diagram form using what he called “Eulerian circles,” which are actually a bit different from what we now call Venn diagrams. While it’s certain Venn wasn’t the first to use overlapping circles to represent the relationships between data sets — and he didn’t purport to have invented them — people began to refer to them as “Venn diagrams.”

A Venn diagram is possibly the easiest type of diagram to understand — you can look at it and immediately see what’s going on. Let’s just say you want to make a Venn diagram looking at the relationship between tomatoes and apples. First, you’d just make lists of descriptive terms about each: a tomato is red, mushy inside, red in the middle, round, savory tasting, smooth-skinned and a fruit. As for an apple, it is red, firm inside, white in the middle, round, sweet tasting, smooth-skinned and a fruit.

One circle will be the tomato circle — listing all the traits of the tomato inside it — and the other will be the apple circle. The football-shaped place where the two circles overlap is where the traits shared by both will go: they’re fruits, round and smooth-skinned. Outside the middle section, the tomato side will include mushy insides, red in the middle and savory tasting, while the apple side will list the other apple traits: firm insides, white in the middle, sweet.

And that’s a simple, slightly fruity explanation of the classic Venn diagram. Time for a snack!

Sports Today – How Brandon Lowe got his swing straightened out...

Hollywood Today – Eva Longoria “Had to Fight” for Overboard Role—Even as Her Husband...