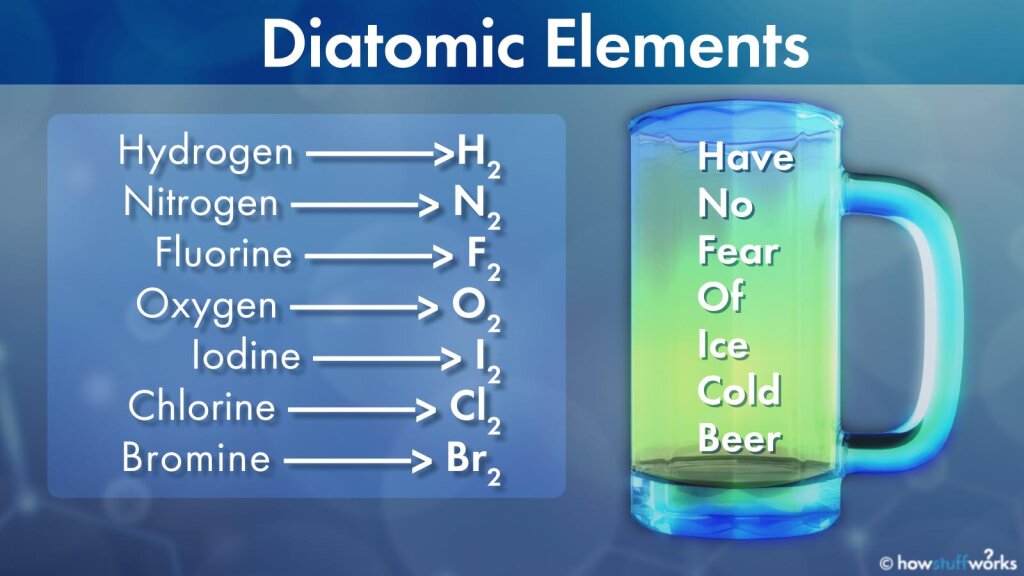 Diatomic elements hate to be alone — so much so that they just aren’t found as single atoms.

Instead they’re always two atoms of the same pure element bonded together. It’s right in the name: Di– means “two,” and atomic means “of the atoms.” And elements are the basic building blocks of the universe.

But out of the entire periodic table, there are only seven diatomic elements:

There are really only seven diatomic elements. Five of them — hydrogen, nitrogen, fluorine, oxygen and chlorine — are gases at room temperature and normal pressure. They’re sometimes called elemental gases. Iodine and bromine are liquids. All seven are nonmetallic.

That’s not to say that diatomic elements are rare — on the contrary! Nitrogen and oxygen, in their diatomic forms N2 and O2, make up 99 percent of Earth’s atmosphere. That’s the opposite of rare.

Need an easy way to remember these seven? Try this mnemonic: Have No Fear Of Ice Cold Beer. The first letter of each word will remind you of each diatomic element.

Sports Today – Tua to wear No. 1 with Marino’s 13 retired by Fins

Hollywood Today – Micrashell Suit Could Be Future for Concertgoers Amid Pandemic