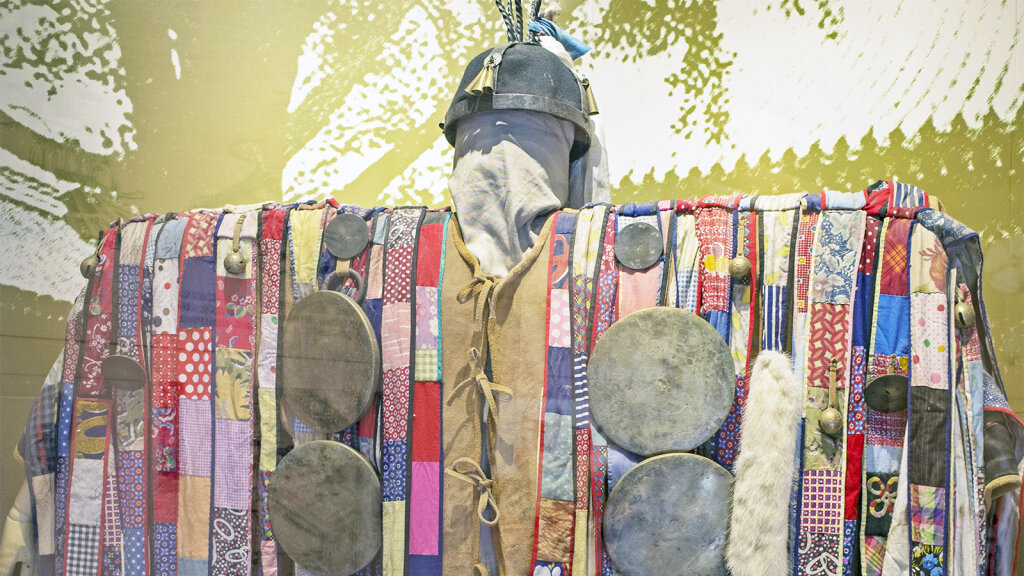 It’s no secret that ancient healing practices from all over the world have become increasingly popular in Western society over the past years and decades (hello yoga, Ayurveda, acupuncture and more). But for many, one particular concept is still shrouded in mystery, despite the widespread recognition of its central theme — what exactly is shamanism?

“‘Shaman’ is an ancient term for a healer — a person of medicine,” Zelena Rivera, director of operations at The Four Winds Society, says via email. “Shamans understand that the material world is an expression of a subtler energetic realm, and are able to interact with both realms at all times. They learned how to dream their world into being within this energetic realm, so they could participate in the creation and stewardship of reality.”

The Roots of Shamanism

While there are spiritual and mystical connotations to the term, Rivera is careful to point out that the term “shaman” in and of itself is in no way tied to a specific religion or creed. “Lots of people believe that shamanism is a religion,” she says. “While a number of religions may have evolved from shamanic tradition — and many shamans around the world may also identify as members of organized religions — shamanism is a spiritual practice.”

A variety of formal religions are said to have roots in ancient shamanic traditions, but the specific practices and beliefs vary. According to the University of Minnesota’s holistic health site, Taking Charge of Your Health & Wellbeing, shamanism is a “group of activities and experiences shared by shamans in cultures around the world. These practices are adaptable and coexist with different cultures, systems of government and organized religious practices.”

In her book, “An Encyclopedia of Shamanism,” author Christina Pratt says a shaman by definition is a person who has mastered three specific things: altered states of consciousness, acting as a medium between the needs of the spirit world and those of the physical world in a way that’s useful to the community, and the ability to meet the needs of the community in ways that other practitioners (like doctors, psychiatrists and religious leaders) can’t. In some cultures that may mean a shaman dispenses wisdom or leads ceremonies in areas including meditation and energy work, but again, the specifics of the practices will vary according to the culture.

According to the website Shaman Links: “Shamans work with the spirit or the soul. They heal illness at the soul level. They gain knowledge and insight from working with the spirits of nature such as rocks and trees, the land, and they gain knowledge from working with spirits of animals and humans such as their ancestors. For the shaman, everything is alive and carries information. You can call this spirit, energy, or consciousness.

“In order to communicate with the spirit or consciousness of these things, the shaman will shift his or her own state of awareness. Shamans can do this through various means, such as meditation, repetitive sounds such as that of the drum or rattle, or through the help of hallucinogenic plants. The shaman will then “see” through a new set of eyes, they will see what is going on with you on a spiritual level.

“The shaman’s practice is also characterized by the soul flight. The shift of consciousness that the shaman makes, which allows the free part of his or her soul to leave the body. The shaman can then go retrieve information for your healing and growth. They can retrieve healing power, or things that you have lost along the way in living your life. During the soul flight the shaman is both in the room, and going on this “journey” so that he or she has an awareness of both at the same time.”

According to Rivera, modern shamans are still very much in existence, and over its 25-year history, The Four Winds Society has mentored over 10,000 students in the field of “Shamanic Energy Medicine.” “Today’s shamans are the new caretakers of the earth,” she says. “Even though we are not shaking feathers and rattles, or reading the oracle of the bones, we are nonetheless engaging with the luminous nature of reality.”

While the concept of shamanism may be open to interpretation and variations, Rivera says the overall shamanistic approach to health is distinct. “Western medicine, which I describe as a disease-care system, recognizes thousands of ailments and myriad remedies, while shamanic energy medicine identifies only one ailment and one cure,” she says. “The ailment is alienation — from our emotions, from our bodies, from the earth and from Spirit. The symptoms of this ailment are physical and emotional disease. The cure is the experience of Oneness, which restores inner harmony and facilitates recovery from all maladies, regardless of origin.”

While there isn’t much evidence to support the effectiveness of shamanic healing when it comes to disease, there are some studies that indicate that the interactive, soul-based healing practices inherent in some shamanic practices may be beneficial for some people. Some experts, like Marlene Dobkin de Rios, Ph.D., who wrote the 2002 paper, “What We Can Learn From Shamanic Healing: Brief Psychotherapy With Latino Immigrant Clients,” published in the American Journal of Public Health, believe that the personal empowerment, behavior modification and cognitive restructuring encouraged by some shamans may be helpful for some people coping with physical, emotional or psychological issues. That said, there’s no single certifying body that registers practitioners, so experts recommend that those interested in shamanism who are not living in indigenous cultures do some research and check out available resources, like the Foundation for Shamanic Studies.

Hacked! – Grab a Deal on This Comprehensive PDF Management App