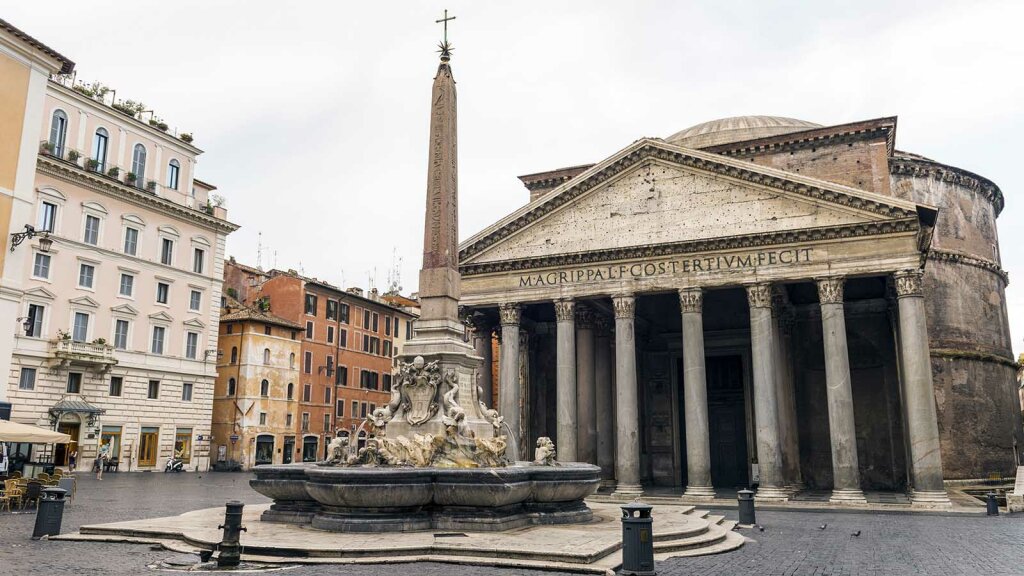 If a friend who was about to go off on a European adventure told you they were going to visit the Pantheon, would you immediately picture ruins of ancient white marble columns? What if that same friend told you they would also be stopping by the Parthenon. Would you also picture a similar scene in your head?

The point is, the Parthenon and the Pantheon are often confused as being the same thing. And that’s no surprise because the names are super similar. But the two are very different; they’re not even located in the same country. The Parthenon, for instance, is in Athens, Greece, and the Pantheon is in Rome, Italy. And aside from both being made of marble and sharing a similar etymology — both names are derived from the Greek word parthenos, which is an epithet of the Greek goddess Athena, meaning “virgin” — these two famous buildings of the ancient world actually have very little in common.

We spoke with Christopher Ratté, a classical archaeologist and professor at the University of Michigan and Dr. C. Brian Rose, the curator-in-charge of the Mediterranean Section at the Penn Museum and archaeologist who’s been digging in the field for more than 40 years, to find out exactly what makes these two ancient ruins so different.

1. They Were Built in Different Centuries

The Parthenon and the Pantheon are two of the most famous temples ever built in ancient Athens and ancient Rome. The Pantheon was constructed in the second century A.D., while the Parthenon was built later in the fifth century. However, neither, as they say, was built in a day.

The Pantheon is one of today’s best-preserved ruins from ancient Rome. It was built sometime between 126 and 128 A.D. during the reign of Emperor Hadrian, who was emperor from 117 to 138 A.D. “It was a reign largely marked by peace … there was plenty of money throughout the empire,” Rose says. “Economically it was a very prosperous time and you see that reflected in the building program. [The Pantheon] is primarily made of concrete, but the inside is lined with marble imported from Egypt, Greece, Asia Minor and North Africa; these international materials bolster the Pantheon as a symbol of the extent of the Roman Empire.”

The Parthenon, on the other hand, took 15 years to build, Rose says. It was built between 447 and 432 B.C.E. during the aftermath of the Persian Wars to highlight the victory of the Greeks over the Persians. At the time, the Greeks were led by (or controlled by, depending on who you talk to) Athens, which was being controlled by a commander named Pericles. Athens had access to a treasury that could pay for additional arms conflict if the Persians came back. This treasury helped to fund the construction of the Parthenon. The goddess Athena was credited with steering the Greeks toward victory, which is why, had you visited the site at the time, you would’ve found a statue of her in the temple’s main room (more on that next).

“Both have many other cultural meanings,” Ratté says, “the Parthenon as a victory monument and a symbol of Athenian power and the Pantheon as a kind of architectural mirror of Roman imperial dominion.” The Parthenon also originally contained a massive statue of Athena inside the temple designed by Greek sculptor and architect Phidias. It was said to be more than 37 feet (11.5 meters) tall and constructed of gold and ivory. The statue was dedicated in 438 B.C.E. and remained for 1,000 years until it disappeared.

3. The Designs Are Similar but Not the Same

You could look at both structures and think that the architecture of the Parthenon influenced the building of the Pantheon. But that’s far from the case.

First, the Parthenon is built high on a hill in Athens and is based on the architectural column styles of Doric and Ionic order, two of the three canonic orders of classical architecture. The structure is dominated by outer columns in Doric style that lean slightly inward to give the illusion of straight lines.

The Pantheon’s dominating design is its massive domed ceiling and rotunda. When it was built in the second century, it was the largest in the world. Today the Pantheon sits in the heart of Rome on the same site of the original Pantheon, which was built around 25 B.C.E. by Marcus Agrippa, son-in-law of the first Roman emperor, Augustus.

Unlike the Parthenon, which is original, the Pantheon, has been rebuilt numerous times, mostly because of frequent fires in Rome.

“The basic form of the Pantheon has changed over the years … the Pantheon is a much more daring engineering marvel [than the Parthenon] because of the extraordinary span of the dome — the largest domical space that had ever been attempted in antiquity and not superseded until the Renaissance,” says Rose.

4. Today One Is a Church, One Is a Museum

While both the Parthenon and the Pantheon are open to tourism, the structures are used in different ways. “The Pantheon is intact and looks very much as it did when it was built, although some of its interior decoration has been altered,” Ratte says. The Pantheon is still used as a Roman Catholic church, and visitors can view much of the original construction while learning more about it on a guided tour.

And although the Parthenon was blown up by the Venetians in 1687, according to Ratte, “it is still one of the best-preserved of all Greek temples and many of its fallen columns have been re-erected.” Today the Parthenon serves more as a museum to ancient Greek history.

Despite having many differences, the two structures also have many similarities, as well. Both were originally built as temples, and were later turned into churches in the early Middle Ages. This is notable as Bernini put bell towers on the Pantheon, which have since been removed.

Both use columns extensively in their designs, and both have faced destruction, looting and rebuilding efforts through the centuries.

Hacked! – You Can Now Use Google Stadia for Free

Hacked! – What Is Google Play Services?