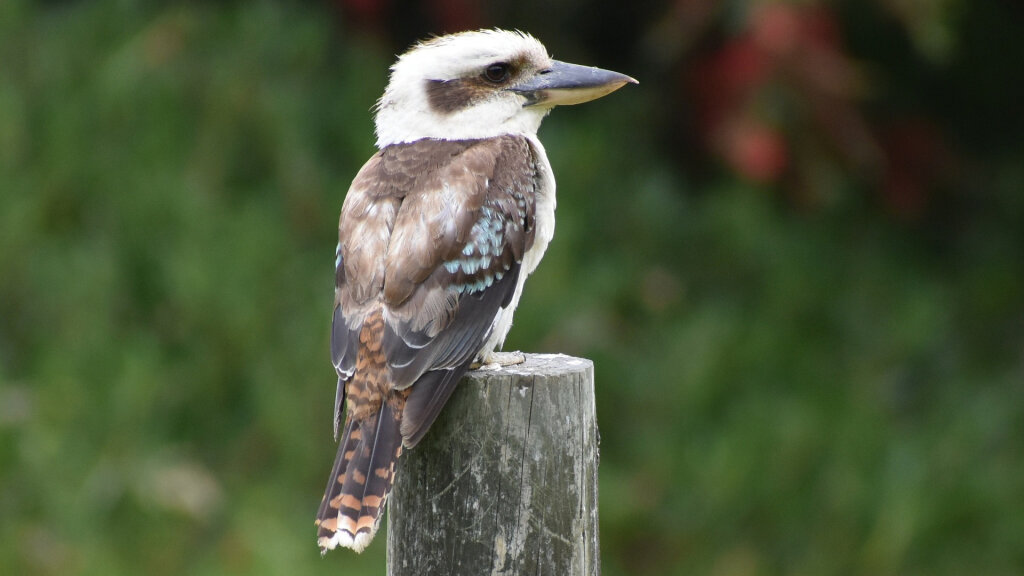 As a child, you probably learned in school that the kookaburra is a bird native to Australia and that it has a really funny name. You might even have learned the kooky little kookaburra song:

But what else do you know about this chuckling feathered friend from the land Down Under?

Kookaburra is an Australian aboriginal word – guuguubarra – that describes the laughing sound the bird makes. According to an Australian aboriginal myth, the creator god Baiame made the kookaburra call out when the sun rose in the morning. The bird was so happy to see the sun that he laughed out loud, waking people and other creatures. And while it’s true that kookaburras do laugh at dawn (they’re often called the “bushman’s clock”), according to Julie Grove, an Animal Embassy area manager for the Maryland Zoo, their laughter serves an essential purpose for the bird.

Why Does the Kookaburra Laugh?

“They mainly do it to establish territory,” she says. “They live in small family groups. And the laugh can be heard at any time of the day, though it is most frequent at dawn and dusk. The males might start the laughing kookaburra sound and the rest of the family group might join in. While a lot of it might sound the same to us, they will sound different within their family. They will have certain calls within their group. It becomes a really loud chorus. There have been vocalization studies that the sounds made by one group resemble each other and they are different from other groups of kookaburras.”

They also vocalize to establish hierarchies within the family group and sometimes kookaburras engage in something like “bill wrestling” to decide who will be the last bird standing. But Grove says what’s really interesting is that the kookaburra’s laugh has been mistaken for other, larger animals – sometimes on purpose.

“Their vocalizations have been used in a lot of movies as the sound of primates,” she says. “When you watch “Tarzan” or “Jurassic Park,” and hear a chimp vocalization, it’s actually a recording of a kookaburra. It does sound very similar to a group of chimpanzees.”

Kookaburras are members of the kingfisher family and get from 15 to 18 inches (38 to 46 centimeters) in length; they can weigh 7 to 16 ounces (368 to 453 grams). They have a squarish head and have a thick neck and strong neck muscles. Kookaburras have a brown stripe across their faces, with a lighter brown stripe on the top of their heads. They have large, brown eyes and a sturdy, prominent bill.

Their feathers are brown, dark brown and white, providing camouflage in the forest. The kookaburra has excellent vision, a helpful attribute because (despite the jolly song) kookaburras are predators and not picky eaters.

“They sit and wait on a perch, waiting for the prey,” says Grove. “They have that really strong beak, so they crush small prey with it. What is pretty cool is the way they kill snakes. They bash the larger prey against a hard surface, which is fascinating.”

In the wild, kookaburras eat everything from insects, fish and rodents, to other birds and snakes. Farmers in Western Australia and New Zealand, where the kookaburra was introduced, consider the bird a pest because it will prey on their fowl.

“They generally lay a clutch of about three eggs,” says Grove. “Both parents incubate the eggs for 24 to 26 days and then they usually fledge by 32 to 40 days.”

Is the Kookaburra Endangered?

The Australian wildfires in 2019 are estimated to have killed more than 1 billion animals, including kookaburras. Despite that astonishing figure, kookaburras’ status in the wild falls in the lowest risk category. However, that death toll number doesn’t include invertebrates and insects, which make up much of the kookaburra’s diet. It may be years before we see the full effects of the damage done.

The Maryland Zoo has one kookaburra, a 15-year-old male named Rascal, one of the zoo’s Animal Ambassadors.

“He’s not an exhibit bird,” says Grove. “So, he’s not an animal anyone can see coming to the zoo. He is handled to go out on programs and participate in educational programs for us here at the zoo.”

Rascal has a team of keepers that have built a relationship with him.

“We interact with him every day,” Grove says. “Not just anyone can walk in and work with him. We do that by using food. We build trust. Once that’s established, we’re able to work with him on behaviors we ask him to do. The things we ask him to do are to stand on a scale every day so we can weigh him, fly to our hand, fly from keeper to keeper to get that exercise, and he’s also trained to go to his kennel. That’s important because that’s how he would travel when we were going to schools. (They’ve had to stop because of COVID-19.) He’s a favorite because we can get him to laugh on cue.”

Grove says Rascal lives in a behind-the-scenes enclosure. Kookaburras typically live 14 to 15 years. But in captivity with access to veterinary care, they can live even longer.

“They can live up to 20 years,” says Grove. “Rascal is 15 now and in perfect health and doing well. I can see him getting to the top end of the scale.”

Sports Today – Racing’s racists scared no one, least of all Bubba Wallace