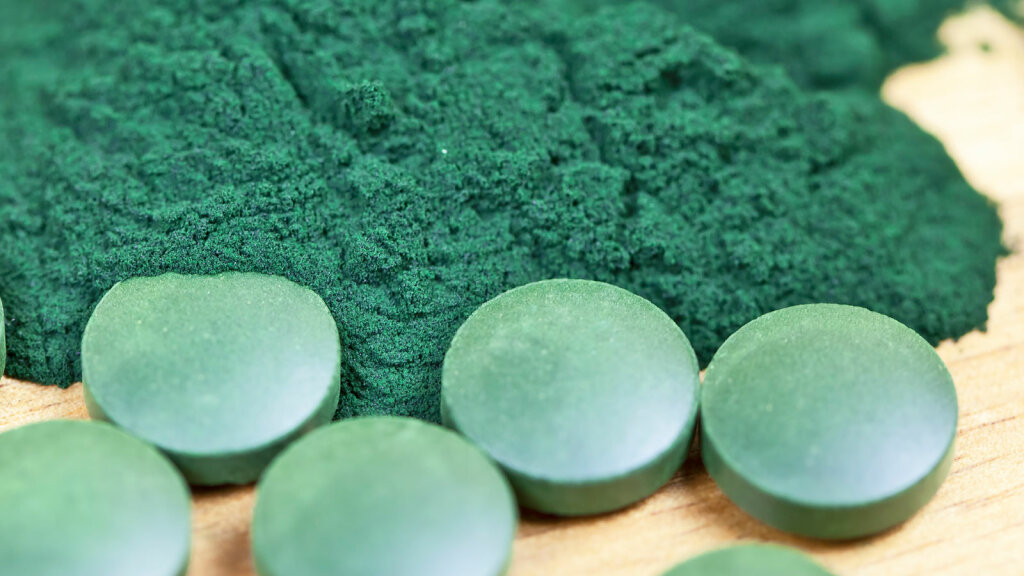 Move over protein powder. There’s a new health supplement in town, and it’s Mother Nature’s bestie, chlorophyll. Yes, that photosynthesis-powering green plant pigment that you learned about in science class is now a staple in some supplement circles thanks to its purported cancer-fighting, anti-aging, and skin-clearing capabilities.

“Chlorophyll supplements are popular because of their high antioxidant content. Antioxidants exist in the colorful pigments of fruits and vegetables, which is why virtually all doctors and dietitians agree to ‘eat a rainbow’ to get the benefits from these antioxidants,” says Diana Gariglio-Clelland, registered dietitian at Balance One Supplements in an email. “Chlorophyll gives plants their green color, so it makes sense that extracting its antioxidant capacity has become popular.”

Chlorophyll joins a litany of plant-derived supplements in the marketplace, from B-vitamin complex options to hemp protein powder. But, why not just eat more vegetables to achieve prime chlorophyll content? First, a lot of people simply don’t get enough leafy greens in their diet, so chlorophyll supplements are seen as a quick and easy way to rectify that problem, although some experts warn against it.

“While there is some research that indicates chlorophyll supplements may have benefits (i.e., acne improvement, slowing tumor growth in animal studies), don’t use these supplements as a substitute to getting lots of fruits and vegetables in the diet,” says registered dietician Amanda A. Kostro Miller, who serves on the advisory board for the website Smart Healthy Living. “You can get chlorophyll in its natural form via spinach, wheatgrass and other green vegetables.”

Although straight from the source is often preferred, concern over absorption issues sometimes lead people to embrace the alternative. “Chlorophyll, taken in the supplement form as chlorophyllin, is more concentrated in antioxidants and may be less likely to degrade in the GI system before being absorbed into the bloodstream,” explains Gariglio-Clelland.

As Gariglio-Clelland mentioned, chlorophyllin, is a semi-synthetic, water-soluble version of naturally occurring chlorophyll. Instead of magnesium, however, chlorophyllin contains copper. Chlorophyll supplements have long been available as pills, drops, sprays, powders or capsules. Riding the wave of chlorophyll’s popularity, however, are newer products like Chlorophyll Water, which is billed as a plant-powered purified water infused with vitamins.

Although many chlorophyllin fans will sing the supplement’s praises from the rooftops, it has yet to be studied with humans in large-scale, peer-reviewed fashion. In fact, existing studies are limited to animals or small in scope. That doesn’t mean that the findings aren’t interesting, though. It’s been a known “internal deodorizer” since the 1940s, where physicians observed that chlorophyllin reduced odor in foul-smelling wounds. As a result, doctors started giving the supplement to patients with ileostomies and colostomies in an effort to reduce the associated odors. (A small Japanese study from 2016 appeared to back up this research.) 1940s-era research on animals also indicates that chlorophyllin can slow bacteria growth and even accelerate healing.

Despite limited hard evidence of benefit to people, chlorophyllin doesn’t seem to have many adverse effects. “While it’s generally considered safe, the only known potential side effects of liquid chlorophyll are GI problems such as diarrhea,” says Gariglio-Clelland. “Because it hasn’t been studied in pregnancy, it’s best to ask your doctor about starting this supplement if you’re pregnant or breastfeeding,” she adds, noting that common dosing for chlorophyll is 100 to 300 milligrams per day, divided among three doses.

As with adding any medication or supplement to the repertoire, it pays to be cautious, especially since chlorophyllin supplements are not government regulated. “If you want to try chlorophyll supplements, check with your doctor or pharmacist first,” says Kostro Miller. “There may be certain medications that can interact with high doses of supplements.”