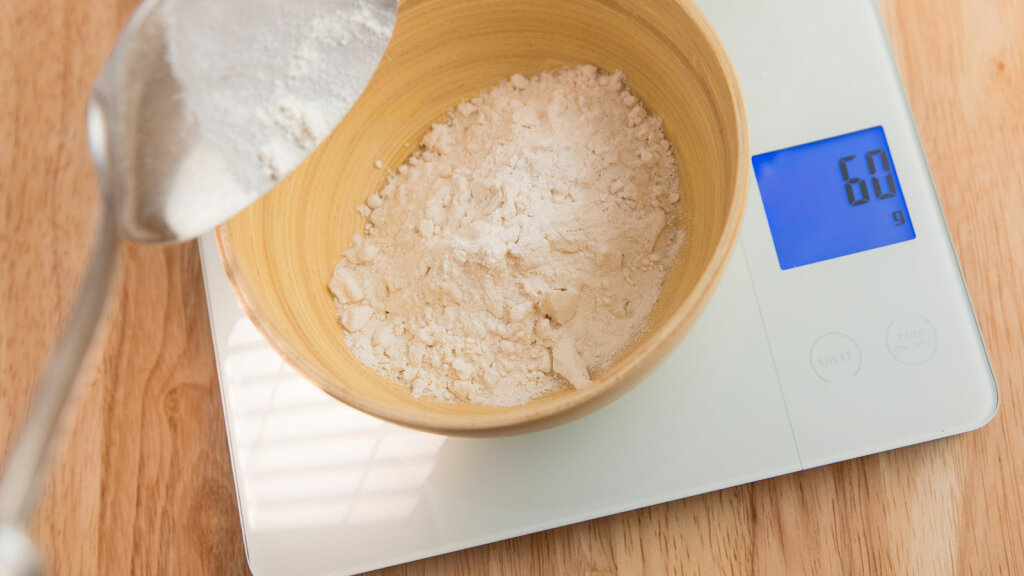 Amateur American bakers in the mood for authentic British scones may be flummoxed when they crack open a British cookbook or download a recipe from the BBC or another U.K. website. That’s because English recipes tend to give ingredients in weights, like grams or ounces, rather than in cups, American style.

But it’s not just Brits who prefer weighing out ingredients. Professional bakers in the U.S. go that route as well. This is because weights are more accurate, and they produce less mess.

“Once you learn to scale ingredients, batter, dough, you don’t want to go back to the volume method of measuring,” explains Sharon Davis, program development director for the Home Baking Association, in an email interview. “One bowl, no cups to wash, accurate results … it’s great.”

So why are weights superior to volume measurement? One reason is that the scale doesn’t lie, but the typical measuring cup does. In fact, many trusted measuring cups are not up to test-kitchen standard, says Davis. Then there’s the fact that many cup-users simply aren’t doing it right.

She gives an example of a home cook measuring 3 cups of flour, 1 cup at a time. “You pack it in or you dip into the bag and shake it sort of level,” she says. “Each cup you measured was about 2 tablespoons to 1/4 cup off because you didn’t measure properly or you used a liquid cup to measure dry ingredients or you had cute measurement tools but they weren’t standard. So, you just added 3/4 cup too much flour (or maybe too little) to a bread, cake or muffin recipe.” The result? “The batter or dough is too fluid or sticky or dry. You get bricks or fallen cupcakes.”

So, why do Americans continue to use cups? Davis says it’s what they are taught; it’s more intuitive than weights (since people originally baked by “feel” and scooping up stuff) and also scales are still pretty rare in U.S. homes.

But using a scale (which you can buy for around $35, but as cheaply as $15) is pretty easy. Simply turn it on, place the bowl on it and hit “tare.” This command resets the measurement to zero, so that the bowl’s weight won’t be factored in. Choose the measurement type (grams, ounces, etc.) and place the ingredient in the bowl until the desired weight is met. This short Home Baking Association video gives a demo, plus an explanation of how cups can give you different measurements.

Not comfortable switching to scales yet? Davis suggests investing in standardized dry and liquid volume cups, rather than using that one glass measuring cup for everything.

Hacked! – How Did Lefties Become Known as ‘Southpaws’?