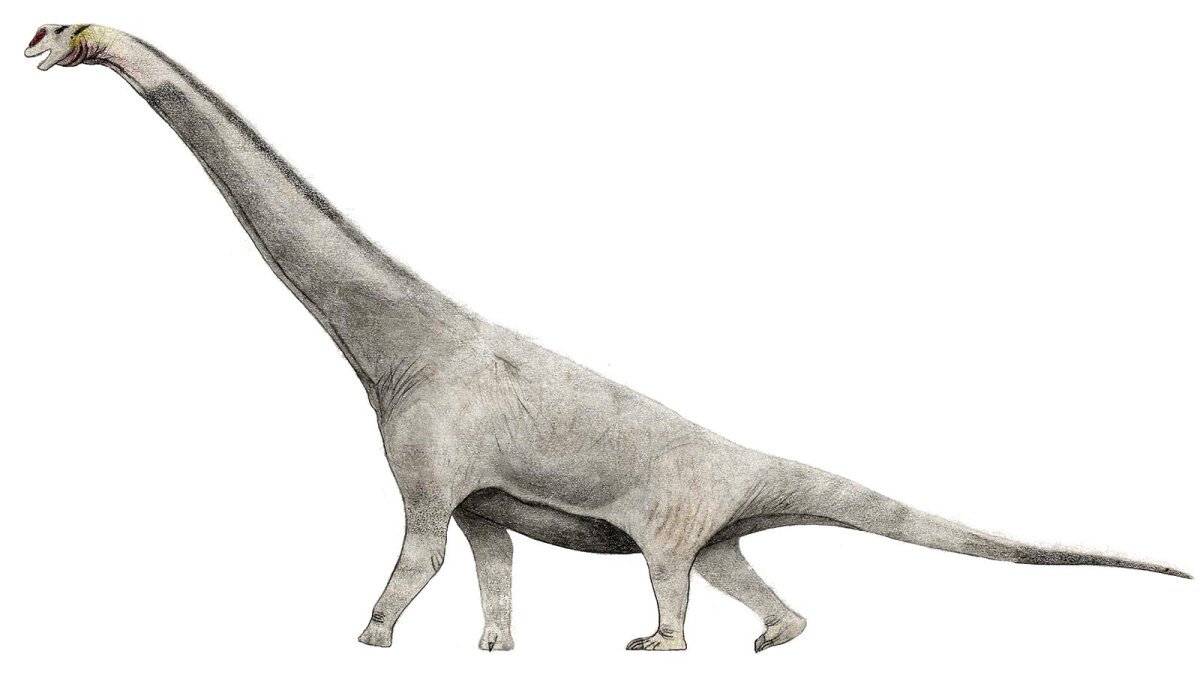 You know you’ve made it in this crazy, mixed-up world of ours when astronomers name something after you. On April 8, 1991, scientists at the European Southern Observatory (ESO) spotted a previously unknown asteroid in orbit between Mars and Jupiter. Since the thing needed a name, they called it 9954 Brachiosaurus.

A long-armed, long-necked plant-eating dinosaur, Brachiosaurus resided in North America during the Late Jurassic Period, about 155 to 150 million years ago.

Today the animal lives on in our popular culture. Except its fame comes with an asterisk.

Brachiosaurus had a memorable appearance in the first “Jurassic Park” movie and it made audiences cry in 2018’s “Jurassic World: Fallen Kingdom.” Yet these portrayals of the giant reptile were largely based on a different dinosaur: Giraffatitan brancai.

An Arm and a Leg

On a fossil-finding trip around Grand Junction, Colorado, in the year 1900, paleontologist Elmer Riggs and his assistant, H. William Menke, came across a very large — and very incomplete — sauropod skeleton.

Sauropods were a diverse group of herbivorous dinosaurs. Generally, they had long necks, small heads and column-like legs. Many species were flat-out enormous. Indeed, the biggest land animal to ever draw breath was undoubtedly a sauropod.

The skeleton Riggs and Menke unearthed was missing several pieces. All that remained were some ribs and vertebrae, a partial hip and an incomplete shoulder blade. There were also two gigantic limb bones.

Obviously, this animal was another sauropod. But it had weird proportions. Most sauropods found before the year 1900 had forelimbs that looked much shorter than their hindlimbs.

Yet the situation was reversed here. Riggs was fascinated by the right humerus — or upper arm bone — that came with the skeleton. At 6 feet (2 meters) in length, it was slightly longer than the dinosaur’s right upper leg bone (i.e., femur), which was also preserved.

In a 1901 article in the journal Science, Riggs said the “extraordinary length of the humerus” and some other bones “suggests an animal whose shoulders would rise high above the pelvic region, giving the body something of a giraffe-like proportion.”

Time for a plot twist. Between 1909 and 1913, German scientists working in East Africa removed 225 tons (or 204 metric tons) of fossils from Tanzania’s Tendaguru Formation. (Mainland Tanzania was part of a German colony back then.)

Unlike the decapitated Colorado specimen, this individual came with a (partial) skull. Plus, most of the ribs and vertebrae were recovered. Dinosaur specialist Werner Janensch identified the bones as Brachiosaurus material. Eventually, these fossils were assigned to a new species: Brachiosaurus brancai.

That Old World giant stretched over 82 feet (25 meters) long — and could’ve carried its head almost 44 feet (13.3 meters) off the ground!

Crucially, Brachiosaurus brancai gave paleoartists more fossils to work with than North America’s Brachiosaurus altithorax ever did. The effects team behind “Jurassic Park” modeled their Brachiosaurus design on the African species. Other artists did likewise over the years.

Then things got complicated. Gregory S. Paul, a renowned dinosaur illustrator, pointed out some anatomical differences between Brachiosaurus altithorax and Brachiosaurus brancai in 1988. He claimed the two sauropods were so distinct from each other that they really didn’t belong in the same genus.

A 2009 study written by Michael P. Taylor of the University of Portsmouth (England) Paleobiology Research Group, published in the Journal of Vertebrate Paleontology, concurred. Brachiosaurus brancai has since been reclassified and renamed; it’s now known as Giraffatitan brancai.

Now that we’ve met Graffatitan, let’s get to know the real Brachiosaurus, shall we?

Because of all the naming drama, Brachiosaurus altithorax — the dinosaur Elmer Riggs described in 1903 — is the only Brachiosaurus species experts currently recognize.

Brachiosaurus had a tail that was both longer and taller than Giraffatitan’s. Also, as Taylor wrote in 2009, it “carried a greater proportion of its mass on the forelimbs.” Hey, if you’ve got extra-large arms, you might as well use ’em.

There’s no doubt that Brachiosaurus was a hefty beast. One 2017 paper published in the journal “Palaeontology” gave a mass estimate of 64 tons (58 metric tons) for Brachiosaurus. Other researchers think the dinosaur was lighter, perhaps tipping the scales at 44 tons (40 metric tons) or so.

Judging by the known fossils, Brachiosaurus was probably around 80 feet (24.5 meters) long. At the shoulder, it may have stood 20 feet (6.2 meters) tall, though its head could be lifted much, much higher.

The exact shape of that head is debatable. A possible Brachiosaurus skull emerged in central Colorado during the 1880s. However, apart from a single neckbone (which was accidentally destroyed), the head was found in isolation. So as of this writing, there’s no way to be sure if it belonged to a Brachiosaurus or some altogether different sauropod.

Besides Brachiosaurus, there were loads of other long-necked dinos stamping around North America during the Late Jurassic Period.

Prehistory buffs should be well-acquainted with the Morrison Formation. Internationally famous for its rich fossil record, this is a geologic sequence of 155 to 148-million-year-old shales, sandstones and limestones.

The Morrison runs all the way from Montana and the Dakotas to New Mexico and Arizona. Brachiosaurus altithorax is just one of the many sauropods that’ve been found in these rocks.

Depending on whom you ask, the Morrison Formation has yielded anywhere from 14 to about 30 distinctive sauropod species — such as the whip-tailed Diplodocus carnegii, the boxy-skulled Camarasaurus lewisi and Brontosaurus excelsus, aka: the “Thunder Lizard.”

It’s fun to think about how such giant animals could’ve coexisted — although you should know that not all of the sauropods represented in the various Morrison deposits lived at the exact same time.

As for Brachiosaurus, the good old “arm lizard” still makes headlines now and then.

A juvenile sauropod found at a Wyoming quarry was tentatively identified as a young Brachiosaurus in 2012. Measuring around 6 feet (2 meters) long, the little tyke would’ve been a far cry from the Colorado titan Riggs and Menke discovered. Like they say, big things have small beginnings.

Hollywood Today – A Three-Boobed Patient Is a First For the Botched Docs!