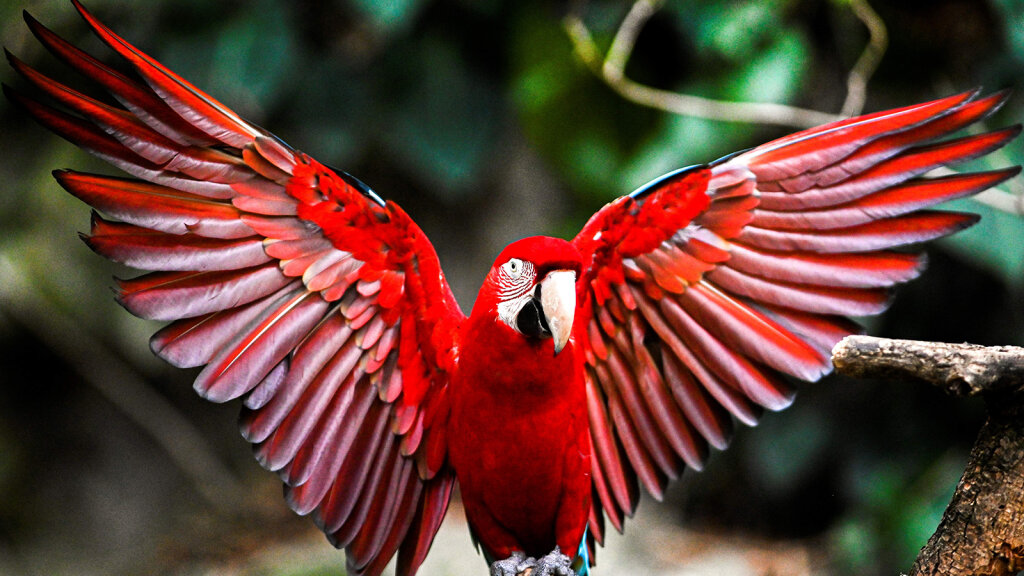 Macaws are giants among birds, reaching up to 4 feet (1.2 meters) from beak to tail. These spectacularly colorful members of the parrot family, made up of 17 distinct species, are from the rainforest regions of Central and South America. They’re intelligent, curious and talkative companions that have been domesticated for centuries.

“Macaws can make wonderful pets in the right household,” says Gregory Rich, D.V.M., an avian and exotic pet veterinarian who has a 24-year-old blue and gold macaw, in an email interview. “Like many other pet birds, macaws are playful and seem to enjoy being trained to perform tricks like waving hello or using a skateboard.” Here are six cool facts about macaws.

In the wild, macaw couples will live in flocks of 10 to 30 birds, all of them calling, squawking and emitting the macaw “scream” throughout the forest. The variety of sounds are used to communicate within the flock or mark territorial claims. Individual birds even create unique songs so their mates will be able to identify them. Some macaw screams can be deafening when indoors, so the macaw isn’t well suited for people who like peace and quiet at home.

Although macaws don’t have a larynx like humans use to create speech, they do have a syrinx. The syrinx is at the bottom of its trachea and, when air is passed over the syrinx and through the throat and mouth where it is manipulated by the tongue, a macaw can learn to speak human words — and even sentences. There have even been domesticated macaws that learned to swear, and then taught those swear words to other macaws. In fact, in September 2020, a group of macaws was removed from the Lincolnshire Wildlife Park in England for swearing at patrons.

Turns out, lovebirds haven’t cornered the market on avian life partners after all. Macaws are undeniably romantic, typically selecting a mate for the entirety of their days. The life-long mate chosen by a macaw is a breeding partner, but macaws also will share their food — much like a couple who splits a meal at a restaurant.

Macaws also enjoy mutual grooming, and often ritualize the task by creating specific and personalized routines to follow. And, when it comes time to lay eggs, mother macaws incubate the eggs while father macaws hunt for food over a large area.

At home, macaws require room to roam, which translates into large cages with space to spread their wings. “Some knowledgeable owners dedicate a ‘bird room’ with tile flooring, with plenty of perch stands or rope perches that can be suspended from the ceiling for their macaws,” Rich says.

Sports Today – Should the Cowboys pay Dak Prescott? Let’s look at the numbers