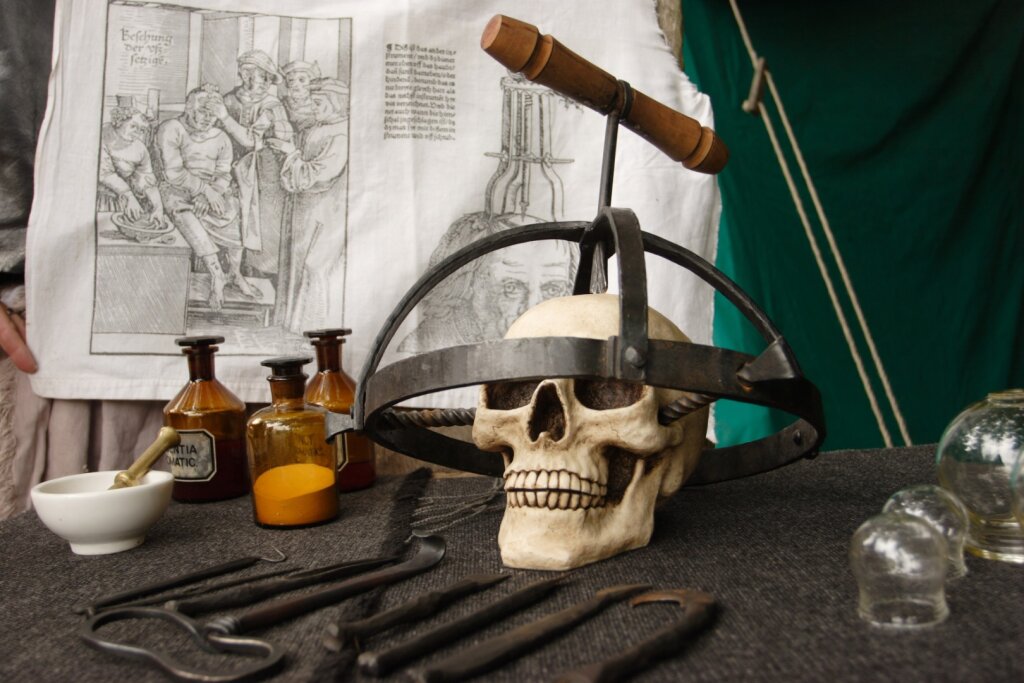 If you had to guess, what do you think the oldest known surgical procedure might be? Maybe a Caesarean section? Amputation? Appendectomy? It seems strange, but the surgery humans have been trying their hand at since Neolithic times is trepanation (also known as trephination or trephining) — the practice of drilling a hole in the skull to treat health problems related to intracranial diseases, to release pressure from a head injury or to provide an escape hatch for evil spirits.

Ancient Holes in the Head

Now, you might not want a caveman cutting a hole in your head, and that’s understandable, but it appears to have been a pretty popular pastime all the same.

“More than 1,500 trephined skulls have been found throughout the globe, from Europe and Scandinavia to North Africa, and from Russia and China to North and South America — particularly in Peru,” says Dr. Miguel Faria, a medical historian and retired professor of neurosurgery in the Mercer University School of Medicine in Macon, Georgia, in an email. “Perhaps the greatest concentrations are found in the Eurasian landmass and South America.”

Not only was this practice widespread, it seems knocking a hole in somebody’s skull was all the rage in the late Neolithic — about 4,000 to 12,000 years ago. In fact, if you take all the skulls from this period, collected from around the globe, between 5 and 10 percent of them have a hole in them, made while the person was still alive. These skulls most commonly belonged to men, but women and children were not excluded from the procedure. The holes were definitely purposeful, and sometimes the owners of these skulls seemed to have survive the procedure, at least for a while.

The big question is, why?

According to Faria, although we can’t see into the minds of primitive medical practitioners, trepanation seems to have been a go-to remedy for a variety of maladies — perhaps by shamans in order to “cure” or alter behaviors or mental illness. In his 1995 book “A History of Medicine – Volume I: Primitive and Ancient Medicine,” medical historian Plinio Prioreschi suggested cranial surgery was performed on important members of society or hunting groups in order to resuscitate them during a grave illness or after sustaining a wound.

The ancient Roman medical practitioner Hippocrates, and later Galen, wrote about trepanation as a means of removing damaged tissue and elevating depressed skull fractures, but reasonably cautioned against penetrating the dura mater — the thick membrane that encases the brain — or the brain itself, as they noticed it resulted in serious complications, such as infection, seizures and often death.

“The Romans used instruments called terebrae that resembled the more primitive tumis of the Incas,” says Faria. “The terebra in turn was the forerunner of the modern burr hole manual drill. During the Middle Ages and the Renaissance, trepanation was performed not only for skull fractures but also for madness and epilepsy. A famous painting by Hieronymus Bosch depicts the extraction of the stone of madness.”

In the European medical tradition, trepanation was mostly practiced in the treatment of epilepsy and mental illness, like mania and melancholy. One 13th-century surgical text recommended drilling into the skulls of epileptics so “that the humors and air may go out and evaporate.” Four centuries later, trepanation was beginning to be viewed by the medical community as a last resort.

The history of trepanation, or trepanning, is obviously long, but it’s important to note that doctors still practice it today for a variety of different ailments, although they don’t call it “trepanation” anymore — that’s just a term used by medical historians. These days, “burr holes” are made in the skull in order to biopsy brain tissue or diagnose brain lesions, treat skull fractures, remove brain tumors or clip cerebral aneurysms. When the hole is enlarged, it’s called a “craniotomy.”

According to Faria, although no remote areas of the world have remained free of Western influences, rudimentary trepanations are still carried out by shamans in parts of Africa, as has been witnessed and video-recorded by journalists in remote villages. These are purportedly done to remedy skull fractures.