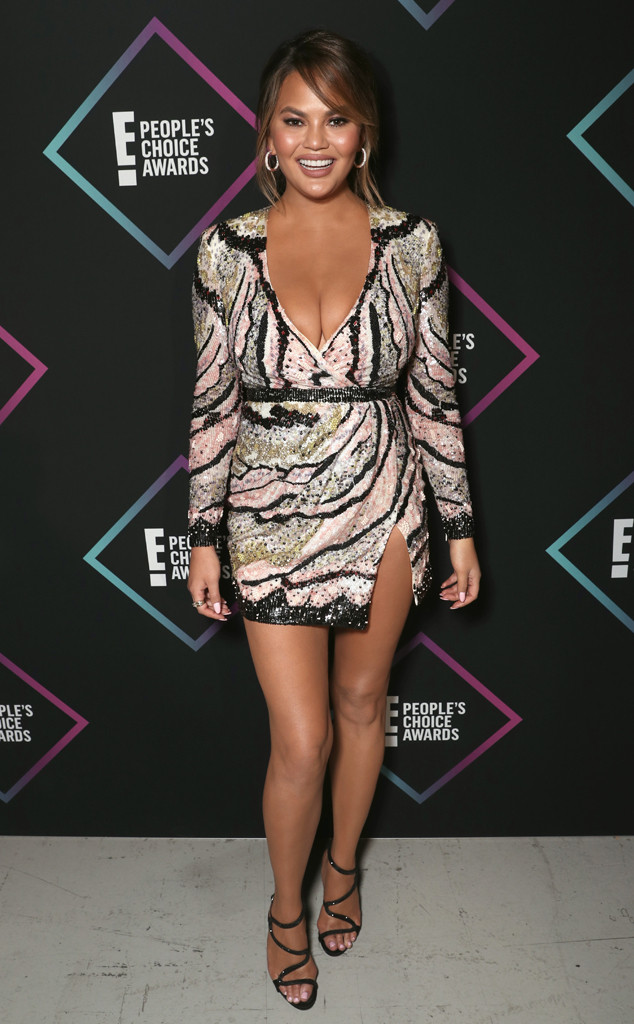 Chrissy Teigen is giving her two favorite gals a shout out: her breast implants.

Yes, you read that correctly.

The Cravings cookbook author took to social media on Monday afternoon to give us the content we so desperately need and deserve, especially with everything going on with the world amid the Coronavirus pandemic.

“happy 10 year anniversary to these t-tties,” the 34-year-old star quipped on Instagram, alongside a throwback photo of her girls looking picture-perfect on the runway. “And RIP to these teeth.”

Naturally, Chrissy’s cheeky post was filled with crying-laughing emojis that came from her famous friends like Paris Hilton, Lisa Rinna and many others.

Despite paying tribute to her ta-tas, Chrissy recently opened up about her biggest regrets, which included getting breast implants at such a young age.

“Yeah, I did my boobs when I was about 20 years old,” she told Glamour UK, in which she was the cover girl for its Spring/Summer 2020 issue.

“It was more of a swimsuit thing. I thought, if I’m going to be posing, laid on my back, I want them to be perky,” she explained of her decision. “But then you have babies and they fill up with milk and deflate and now I am screwed.”

When asked if she got her boobs done due to self-esteem issues, she said that part of her body wasn’t an insecurity.

“Honestly, I kept them the same cup size,” she shared. “I just filled them out, so they are rounded and firmer. I had a quarter ‘teardrop’ cup in the bottom and filled out the breast line. But I want them out now. If I could do one thing, it would be to have a lift.”

However, Chrissy did open up about how her weight affected her confidence, especially since she worked in the modeling industry.

“I used to weigh myself every morning, afternoon and night. I knew what the scales would say after each meal. I did that for eight years and had this one weight I wanted to be at,” she shared.

She said having two kids with husband John Legend—Luna and Miles—changed all that, though.

And in case you’re wondering if Chrissy should replace her breast implants by now, she explained why she’s hestitant on doing so.

“I think you’re supposed to replace [implants] every ten years,” she told the publication. “But when you have kids you think about [the risks] of surgery and I think, ‘This is not the way I want to die, in boob surgery.'”

Sports Today – 755 home runs and even better than you remember: Hank Aaron was one of the five best MLB players ever