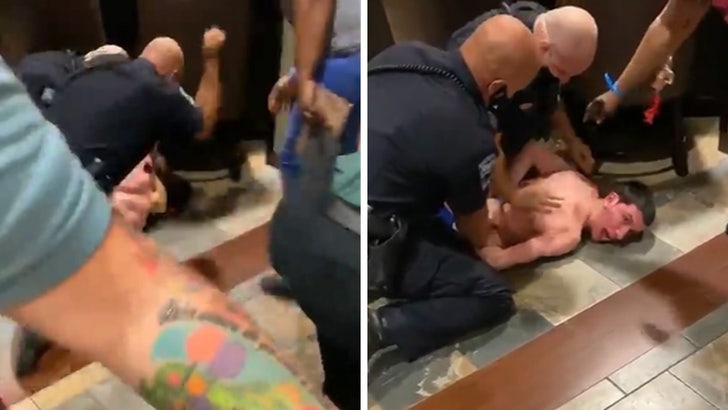 A group of teens at a Pennsylvania water park resort claim they were harassed all day by an off-duty NYPD officer, and when local cops showed up … things got violent.

The incident went down at the Camelback Resort in Tannersville, PA. According to the father of a young man who got punched in the head by a cop … a man who identified himself as NYPD was confrontational with the kids earlier in the day, and got them kicked out.

The dad says management told the kids they could go back to their rooms and return to the park in the morning. However, when police showed up, that off-duty cop went after them again … which is where the video begins.

It’s pretty crazy … it appears the older man was the aggressor, yet Pocono Township PD dealt with him very calmly. Meanwhile, the teens and their group felt they were getting treated unfairly, and eventually, the cops told them to leave. That’s when things got out of hand.

As one shirtless young guy was being arrested, another was taken down by 2 cops — and one of them clearly delivered 3 brutal blows to the back of the teen’s head as he’s on the ground … while the other cop forced his neck down.

The young male yelled that he’s not resisting, but got punched 5 times, before he was brought to his feet and led away by cops. Those cops are now in hot water.

A rep for the Monroe County D.A. Criminal Division tells us the officers involved have been suspended, and the PA State Police have been asked to investigate further.

We also reached out to Pocono Township Police … so far, no word back.

Hacked! – What’s the Difference Between a Windmill and a Wind Turbine?