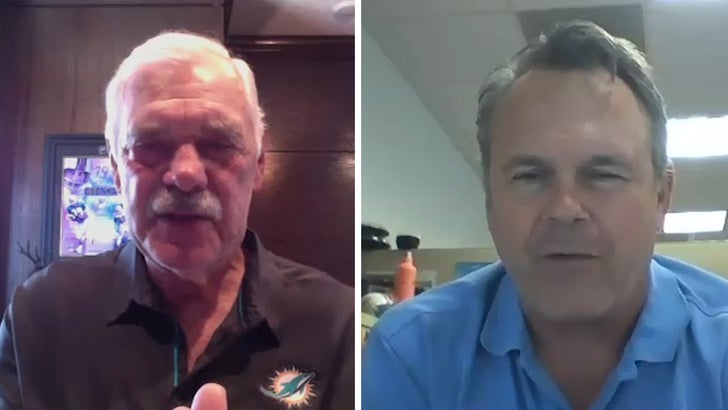 4:08 PM PT — Some of Shula’s players from his historic coaching career shared their memories over the years … including first impressions at practice, legendary speeches and life lessons.

Don Shula — the NFL coaching legend who famously led the Miami Dolphins to a perfect season in 1972 — has died at 90 years old.

“[Shula] passed away peacefully at his home this morning,” the Dolphins said in a statement.

A cause of death was not immediately known.

“Don Shula was the patriarch of the Miami Dolphins for 50 years,” the team said.

“He brought the winning edge to our franchise and put the Dolphins and the city of Miami in the national sports scene.”

“Our deepest thoughts and prayers go out to Mary Anne along with his children Dave, Donna, Sharon, Anne and Mike.”

Shula is one of football’s all-time greats … after a playing career as a defensive back in the NFL in the 1950s — he went on to become a Hall of Fame coach.

Shula also won two Super Bowls as the coach of the ‘Fins … and is still the only man to ever coach an undefeated NFL team.

Don was elected into the Pro Football Hall of Fame in 1997.

Shula had a major impact on a ton of famous people. Some of them are posting tributes on social media including:

NFL commish Roger Goodell — “Don Shula will always be remembered as one of the greatest coaches and contributors in the history of our game. He made an extraordinarily positive impact on so many lives.”

“His iconic legacy will endure through his family and continue to inspire generations to come.”

The Cleveland Browns — who drafted Shula in 1951 — shared the team’s condolences … saying, “We’re proud of the fact that his football foundation was built in Ohio, starting at Harvey High School in Painesville, playing collegiately at John Carroll and then being drafted by the Browns.”

“Coach Shula’s contribution to our game are unmatched. Our heartfelt condolences go out to the entire Shula Family.”

Andrea Kremer — “My deepest condolences on the passing of Don Shula … As a professional I worked w/ him & got to know him well, even naming my dog Zonk, just like he did. RIP Coach.”

Gov. Ron DeSantis — “Coach Don Shula leaves behind an incomparable legacy as the NFL’s winningest coach and as the one who put Miami sports on the map.”

Bill Cowher — “We lost one of the most iconic men in the history of NFL coaching in Don Shula. His leadership and wisdom helped to guide me and many others who have made a life in coaching football. Thank you Coach Shula. May your spirit and legacy live on forever.”