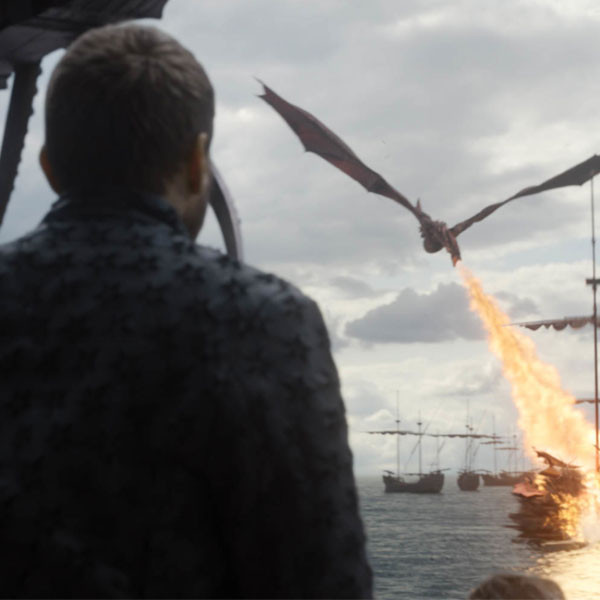 Yes, that was Game of Thrones co-creators D.B. Weiss and David Benioff on Westworld—along with one of Daenerys Targaryen’s dragons.

The second episode of the long-awaited Westworld season three featured the winking cameo.

“People have often joked about Westworld, Game of Thrones crossovers,” co-creator Lisa Joy said in a behind-the-scenes video. George R.R. Martin likes to joke about that. And so we thought we’d kind of indulge in that for a moment. And who better to bring to the park than Dan and Dave? And they let us borrow their dragon, so they were really good sports for the scene.”

The scene in question featured Bernard (Jeffrey Wright) and Stubbs (Luke Hemsworth) walking corridors only to discover techs for Delos waiting around for the layoffs. Those techs included Benioff and Weiss. The two techs find out they have a buyer for…that very familiar looking dragon. How will they get it to Costa Rica? In pieces.

Westworld co-creator Jonathan Nolan told The Hollywood Reporter a friendship between the executive producers made the cameo come to fruition.

“We’re friends with both Dan and David, who are lovely human beings. They have been incredibly supportive and friendly with us as we were getting our show up and running. George R.R. Martin as well. George has frequently pitched a crossover episode. When the time came for Luke and Jeffrey’s characters to be wandering around in the bowels of the Mesa, we could not resist,” Nolan said.

Go behind the scenes of the episode in the video above.

Sports Today – Chris Sale wants to prove nothing’s ‘better than getting a brand-new...